I noticed weight gain in October, ended up gaining 30 lbs from early September to the new year. At first I suspected the change in exercise; with end of summer I stopped daily rollerblading, and my gym closed for pandemic.

Now I suspect it may be the Gatorade Zero I started buying in August. Having lost 100 lbs 10 years ago I’m very in tune with my weight and this gain was confusing me. Over the years I’ve avoided “frankensugars” but thought what the neck, low cal gatorade sounds tasty. And I was chewing sugar free gum.

After quitting those a week ago, I’m down 5 lbs and expect to drop the other 25 in a month or two. My adult son told me last night he’s been gaining weight too, so we agreed no more artificial sweeteners.

It’s good you figured it out. I’m trying to get my daughters to stop drinking Diet Coke.

Artificial sweeteners react differently in everybody, but slim to no chance you gained 30lbs from them. You gained 30lbs because your diet vs your activity were way to of of whack with loss of gym and and exercise. As somebody that lifts myself, I know first hand how bad that gets you, we eat a lot more than we think we do. I have to track everything religiously so I don’t get stupid, I can easily stick an extra 1000 calories into my day and never notice the difference if I’m not tracking. When I’m really hitting the gym hard it could just as easily be 2000.

I was surprised too, otherwise I’d have cut out the sucralose before 30 pounds. But, I lost my 100 lbs via keto ten years ago, so I have a lot of experience, and have the process down pretty well. The clincher was when my live-in 30 yo son told me he’s been gaining weight too since we started drinking gatorade zero.

I’m convinced it was the major factor with the weight gain, with reduced exercise being a minor contributor.

My suspicion is that the sucralose takes me out of ketosis so my high fat/protein diet caused weight gain.

sucralose takes me out of ketosis so my high fat/protein diet caused weight gain.

You would not gain 30 pounds simply from a lack of ketones. It may be that the sweetener made you want to consume more calories or expend fewer calories but at the end of the day energy balance is still key.

All the research I recall reading indicates that exercise - notwithstanding its essential health/metabolic benefits - is not a significant factor in weigh loss or gain.

I’d be highly suspicious of the notion that your weight gain is the result of reduced physical activity.

I read an article years ago about how some artificial sweeteners (phenylalanine–the pink packets) destroys a bacteria in the gut responsible for weight loss things. Sorry I don’t have all the details now. Anyway, I quit using it and lost 5 lbs in a two weeks changing nothing else.

I can’t prove it but will go back to recommending anyone trying to lose weight avoid artificial sweeteners. See the graph, this is my weight over about 2 and a half years. 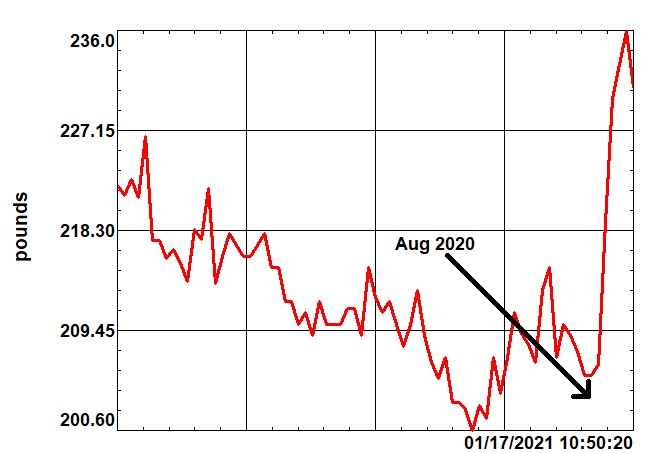 The following is an unpopular view around here, but … Based on my own experience, I think not going to the gym could have something to do with it as well. Good luck sorting it out!

Yeah, everyone reacts differently to sweeteners. I started drinking Gatorade Zero a couple of months ago for something different. Hasn’t affected my weight so far but I will keep an eye out. Thanks for the heads up.

It is an interesting n=2 experiment.

While there are many other possibilities, since we do not know you day to day and there might be something that did not occur to you (happens to me all the time!), it sounds like one of three possibilities (to restate the obvious!) Do not mean to make assumptions or presumptions just wondering on paper

In terms of narrowing it down, if your son is willing, you could measure his blood glucose about an a half hour after waking up, have him drink a Gatorade, and see if his glucose level changes, 30 minutes and an hour later. Note a large drop means an insulin response. You could do the same thing but that means returning to drinking the poison which may trigger something for you.

You could also work on doing some muscle building exercises at home, working out with weights a few minutes every other day. It will not burn much in calories, but it may build enough muscle to reduce your weight. Also if you really have not been doing much while home, perhaps consider some general movement to replace not commuting and things like that. Possibly some meditation or other stress relief if that is an issue.

Have you ever tracked what you eat? You may want to do it for a little while to see if the poster who said you may be eating too many calories is correct also to see if you are eating more than you did a year ago.

I was drinking approximately 2 Gatorade zero bottles per day. Also chewing sugar free gums. As for tracking my food intake, I’ve been eating keto long enough to know my diet well; just look at the graph. Also note, the reversal at the end. I have no doubt I’ll drop the extra weight in several weeks.

(I bought an exercise bicycle and have been riding it faithfully since Christmas.)

Sounds like you are on your way. I did not really stop to consider the sugar free gum but that is an issue or could be, especially if you chewed it frequently throughout the day. Every time you put something in your mouth it provokes a tiny insulin response. If it tastes sweet then you have a slightly bigger spike in preparation for the sugar your body thinks it is getting. Since insulin encourages storage of fat, this may have been the cause. Bike is a good idea. It also may not have been one thing but the combination and it sounds like you are taking a multifactorial solution

I can totally relate to artificial sweeteners interfering with weight loss/gain as this happened to me early on in my Keto journey and I eliminated them all then (except for now I have them rarely when my kids buy me Keto treats on special occasions but they have this same effect on me).

It is awesome that you figured it out and that you are back on track to getting back to your Maintenance weight, though =).