Getting deeper into the new year. I hope everyone is being successful.

Lately my body keeps trying to put on weight, so I am doing more 36 hr. fasts to keep it from climbing.

I am doing OK, maintaining with relative ease by eating mostly two meals a day, and an occasional OMAD thrown in. I am 3 years in now.

I’m up 10 from where I was when I switched to maintenance, and trying to figure out what to do. I stopped buying nuts, and have done OMAD one or two days a week. It seems the only direction is more fasting. Maybe a two day fast once a week? Maybe back to my ADFs three times a week?

Maybe back to my ADFs three times a week?

I’ m trying to move into this, ADF is easier than sustained fasting. I also am cutting back, not eliminating nuts. I tend to grab too many so I put them in the cupboard in the basement, so they are not so access
able.

Things were a bit messy lately, I still wrestle with my too easy satiation and the unusually small meals it causes and it’s just one thing. But it will be stable soon, I see it, I lost most of my food addictions, it seems.
My weight is the same as always but I am patient. I lose fat, I am sure about it. Very slowly but I appreciate very slowly over zero for years. It’s not like I am in a hurry or I suffer and want to finish soon

I am looking forward to the ZornFast this month, I am not ready for other fasts yet, I need my old bigger meals first.

Good luck, folks! I definitely want to see a smaller number in the end of the month already. Not like the number itself is important but it’s still an indicator.

I am doing OK, maintaining with relative ease by eating mostly two meals a day, and an occasional OMAD thrown in. I am 3 years in now.

I should probably add that I am staying active. Some sort of physical activity 6 days a week (gym, running, skiing, etc.). This really, paradoxically, helps keep the munchies at bay.

Also, my weight is ~15 lbs higher than my absolute lowest (145 lbs at rock bottom vs 160 lbs today), but my clothes still fit the same as when I bottomed out at 145, so I am guessing (hoping) it’s mostly muscle.

I continue to maintain with the support of this forum and dude podcast reruns. I have issues with peanuts too…what makes these salty morsels so desirable? Most days I am succumbing to temptation and while my weight is relatively stable it highlights my food addiction weakness. KCKO peeps!

I tend to grab too many so I put them in the cupboard in the basement, so they are not so access
able.

I tend to be pretty disciplined about nuts; I measure out a portion and just eat that, but I noticed that often I’d feel hungry and reach for the can of macadamia nuts rather than having a “real” lunch. I can definitely get calorie creep with nuts, if not carb creep. Which, I guess, is grudgingly acknowledging CICO.


so make of that what you will.

There was a discussion here in the last year or so on, “what’s the portion size for macadamia nuts?” My reflex answer to that is “boxcar”.

My plan for the coming month is do my Body By Science (or BBS-like) workout once a week, eat TMAD for three days (that day and the next two) and then either do OMAD or a couple of ADFs for the other four days. Weather has kept me off my regular 3x/week bike rides, but I’ll get back to those as much as weather allows.

I eat lots of green salad plus just meat with fatty dressing meals, so I’m not sure why I started this upward trend. I did go through some old notes and noticed this same thing occurred around this time last year. So it might just be the shorter daylight hours and colder weather limiting outdoors time?

I was an addict for years… Then I run out of peanuts and started my first carnivore trial and I had zero problems since. Lucky timing, I guess but extreme low-carb does odd things to me anyway. It instantly cured all my food addictions (not coffee and if I eat more carbs for days, they come back to some extent).
It’s still very recent and I didn’t even have the tasty kind of peanuts at home now, it obviously helps but it really seems carbs mess with me so avoiding vegetables and most of the other plants is a good idea for me now… I simply need to be satiated all day and I don’t start desiring things then. Carbs mess with my satiation, that’s why extreme low-carb helps. It’s individual, maybe others need bigger meals or eating when hungry instead of a snack or not having dangerous items at home (to me, it works if I consider the trigger food in the house not mine. we who live with someone else on a different diet obviously couldn’t throw out all the food we don’t want to consume)… If the addiction is too strong, they might not work, mine is usually just “if I have it and I fancy it, I eat it but if I don’t have it, that’s fine”, that’s easier.

I eat lots of green salad plus just meat with fatty dressing meals, so I’m not sure why I started this upward trend.

I’m similar, but often use cooked greens (broccoli, green beans…) instead of salads. I guess my biggest fear is that I had something similar last year and eventually got up about 10 pounds higher than I am now and it took from May until October or November for me to get back where I should have been.

That lingered until May because I suddenly couldn’t fast without bowel problems. I eventually solved that, but instead of trying to lose it in February, it stretched out until May.

Oh I often have cooked greens, with bacon cooked in them too, can’t eat raw veggies everyday

I am just hoping mixing up things will make my body settle down.

I am traveling along pretty well. I thought I had a bit of ‘December Creep Up’ happening, it was really only 2ish kgs and not something I should have worried too much about, but I wanted to rein it in before that 2kg turned into 20kg.
So for the first day of January started tracking again as I had done right up until the start of December. I also dropped my calories (yes, yes, I know it goes way deeper than CICO) to 1600 and dropped 3kg in the first 12 days of January. Obviously a bit stoopid of me and something that would have made me feel compromised had it continued at that rate.
So.
Back to eating more again since then. My weight seems very stable and tends to to fluctuate by 1-1.5kg, depending on what part of the month it is and that seems like a good, normal fluctuation for me.
I am beginning to accept that the scales will do that,it is okay and seeing that slight gain toward the end of my cycle is not a reason to go into panic mode and cut down on my eating…as trends show that by the following week, my body will have naturally gone back to that lower set point on its own anyway.

Such a process isn’t it?! I have said before, that maintenance for me is a waaaay harder thing mentally to do than lose weight. So many hang ups from previous weight losses where I regained it all back and then some. I am slowly regaining trust in my body and just getting back here on the forums realised I have been in maintenance for 9 months now, this is the long game and the positive benefits of keto are for life.

Oh and I have to end my ramble by saying summer in Australia has been HOT. Pre keto I normally would drink quite a bit of wine or alcoholic apple cider, but I have found some joy in a keto friendly alternative. I found a little can of cold coffee in my local rural supermarket that has been such a brilliant ‘treat’ this summer. I do make my own coffee over ice but there is something really nice about being able to grab a cold drink when you are out with your family on a hot day. I love them so much I selfied with the can. I am such a loser 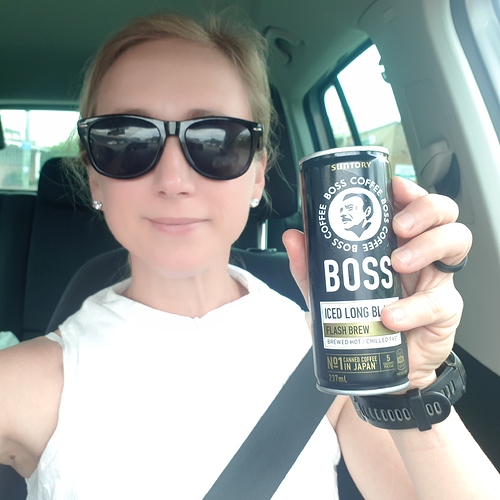 I discovered a potentially useful thing in the past week. A cautionary tale.

Body composition by bioimpedance scales are usually derided on the forums as not being accurate; if you want to know your % body fat, you need to get a Dexa scan. I always thought they were pretty repeatable if not accurate. That is, it might tell me my %BF is 25% when it’s really something higher or lower, but it will tell me pretty much the same value ever day.

Last week, I did something to hurt my back. Pretty much out of nowhere, last Thursday I’m putting on my Dorky Pants to go for my morning bike ride and within a few minutes could hardly walk. It took until yesterday to get back to normal and be able to ride. Nothing helped at all with the pain last Thursday, but by Friday I found Ibuprofen did the best.

In short, I gained 4 pounds in 4 days, and then lost almost all of it in one day when I stopped taking the Ibuprofen. It’s pretty much impossible to gain a pound a day by overeating, especially when you’re conscientiously trying not to. Has to be fluid from the swelling; 5 pounds is a little over half a gallon of water and I think it’s easy to hide a half gallon over a 6’ tall 200 pound body. According to my Renpho scale, at the peak of my weight, my % water went down. It called the weight gain body fat gain.

It really lowered my opinion of the usefulness of the scale - putting it the same as any scale.

The March thread is up, I just remembered there is another day in Feb.

Wow, the year is really moving right along. Hope everyone is on point with their eating and other goals. Maintenance is often harder than losing, so we are here to support each other in our efforts to keep off the weight we lost, the illnesses that have healed, and keep our spirits high.