Thank you Doug. That looks like a great unit. I hear people mention “how fast different models heat the water”… but this doesn’t seem critical to me when your cooking for many hours, or even days ? Also, why wouldn’t a person just start out with hot water ? I bet our sink makes 130 degree water ! So, instant hot water, regardless of the Sous Vide machine… Also, in colder weather, maybe a person might benefit from an insulated cooking vessel ?

I had actually found an Anova 750wt model for $79. I would think that as long as it could “maintain a good cooking temp” it would be fine, no ? Was thinking of using it in a 12qt container. Not cooking anything huge, as its just me and my GF…

Or even this one…

Anybody here have this one ???

Yeah - I don’t see anything wrong with starting with hot water. And 750 watts is plenty, from what I’ve seen.

That 1000 watt one looks darn good from the reviews thus far. As long as the water-circulation pump is good enough - a few units in the past had trouble getting the water around the bags of food, especially in a densely-packed sous vide container, raising the possibility of some stuff not getting to the desired temperature (or perhaps the safe temperature.)

Insulated containers would take up a bit more space, but if that’s not a problem then cool. I don’t think the sous vide unit would have trouble with heating, even if the room air is fairly cold, but one wouldn’t heat the room air up as much - only would matter if the air conditioning is on, I figure. I didn’t notice much heat at all coming off my uninsulated one at 140 F or 60 C though.

I use the Anova Nano 750W unit. I’m also just cooking for the two of us, so the smaller size works fine.

I use tap water when convenient, but some things require higher temperatures. That pulled pork a few posts above was 170F for 24 hours. I have a 12 quart tub and it took a while to get there. I’ve also used 130 from the tap to cook a rib eye for a couple of hours - the Nano just circulates it and keeps it at temperature.

Oooh… i
I didnt know there was a nano. I need a low watt version so I can run it on an inverter.

I picked up a cheap 800w one branded as Power Precision Cooker which started ‘as seen on tv’ then Walmart clearanced them out for $25. I only just started using it, but if it falls apart I’ll be looking at an upgrade.

(I just noticed I typed 75W instead of 750W so I corrected it. It was probably obvious, but better to not post typos!)

I had been looking at various sous vide units and got this one on the Amazon pre-Christmas specials. I’ve wondered if the 1000W units would be better but I really think all it would do for me would be to cut some time off setting up high temperature cooks.

I’m just going to heat some water on the stove next time to get it started. Less stress on my limited electrical grid that way.

I’d think your sink would get would be pretty close to the typical Sous Vide cooking temps… I know ours will ! Keep meaning to turn that darn water heater down !

We’ll be doing an experiment for the 4th with a friend of ours. Every year he does ribs, and his practice is to parboil, then marinate and grill to finish them off. This year, I’m going to do a couple of racks with the sous-vide and we’ll compare to his normal parboil method. I think I’ll get his marinade recipe so they can sous-vide with the marinade. Any suggestions on temps or times are greatly appreciated.

As for marinade, Ive seen several mentions that when adding any kinds of liquids in the Souse Vide bag, it can dilute the natural flavors of the meat. Maybe marinade the meat, before putting it in the bag, but not put the marinade in the bag while … uh, what do you call it… Souse Vide’ing

I ended up skipping the marinade and just using a dry rub with a few drops of liquid smoke. Haven’t tried one yet, did them at 145 for 35 hours, so we’ll see. I’m looking forward to this! 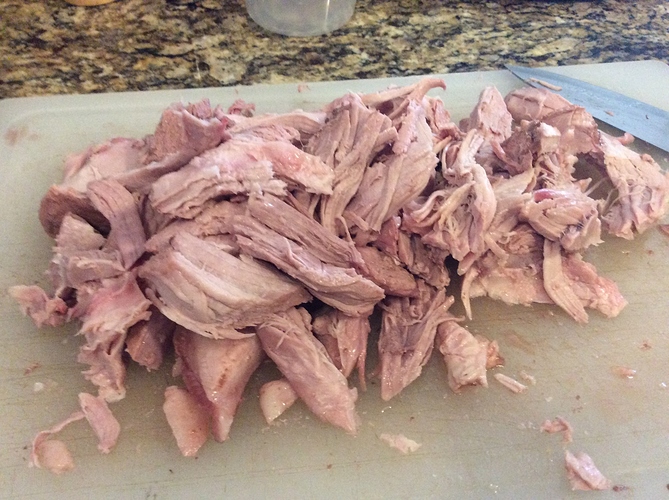 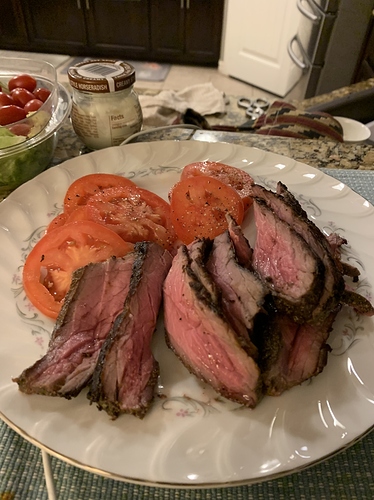 Some general things for sous vide cooking, new to me.

I tried a marinade in the bag with some cheap chuck roast (or ‘chuck shoulder,’ can’t remember) beef. Looked for a recipe online, something like, “best marinade for beef.”

Found one that “looked good,” though I didn’t really know at that point. It included vinegar, Worcestershire sauce, soy sauce, pepper and some other spices. I cut the meat into “steak” thicknesses, like 1" or 3 cm, and then sliced into those pieces every 1/4" or 6-7 cm, not cutting all the way through them, but most of the way. I figured this would give lots of surface area and exposure for the meat to the marinade, while having each ‘steak’ still hang together as one piece, versus cutting it into true thin slices.

48 hours sous vide at 138°F or 59°C. Wow, it turned out GREAT! Really delicious, and tender and “high quality” seeming, even with such a cheap cut of meat. I think the meat would be excellent without the marinade (such things have been, in the past), but it made a significant difference for taste, and I will definitely do it again.

Searing - using an oven broiler for ribeye steaks has been good, but for some tenderloin/filet mignon it was not. It substantially cooked the meat more versus how it came out of the sous vide.

I’ve used a torch, propane or ‘MAPP’ gas (burns ~100°F or 40°C hotter than propane), and it gets to all the outside surfaces of meat admirably well. My wife doesn’t like it - she says it alters the taste, even though I’m careful to keep the cylinder lower than the torch head, so no unburned material can get to the meat. I don’t know whether anything is changed or not, and would be interested to hear other people’s experience and opinions.

Searing in a pan on a stove - recently got a plain old cast iron skillet, and it does a fantastic job, much better than most other materials. If the meat has flat sides, so much the better - that’s what one really needs. A box of pre-cut frozen pork chops, a sliced pork loin, beef that’s been carefully cut or done by a machine - life is good.

Oil or fat with a high smoke point, get that iron really hot and boom.