A lot of what I read refers to cooking meats for days, not just hours. What is the point in that? I don’t want to plan a roast 3 days out, if I want roast, I want it tonight, not 3 days from now. Or is all that talk of days, just that, talk? I really want an answer to this. I haven’t gotten one of these because of that talk.

I will be making my own mozzarella balls going forwards, thanks to WineandWhey classes, so the steady temp would be nice, but you can get thermometers that cost under $10 for that.

Thanks for starting this thread, there is a lot to learn about this topic.

An easy thing I do is buy those chuck roasts at $1.99 a pound… cook for 24 hours… leave it vacuumed bagged.

When it is time to throw a meal together and you feel like steak… open up that sous vide roast, slice into steaks, finish how you please, grill, griddle with butter etc and poof steak dinner in less than 10 minutes all depending how long or fancy your cauliflower side dish is going to be.

So while better cuts should be cooked at shorter timing, it also allows you to hold it at that temp longer for convenience as well. The long cooks are for cheaper cuts of meat, which stretches your dollar which we all need as eating Keto isn’t cheap.

Mic, I see you have 10 days ‘recent read time’ on this forum. Ha! Man, that is really putting in your time.

It’s always open in a tab, so I think I have it well fooled

A lot of what I read refers to cooking meats for days, not just hours. What is the point in that?

We used to get hanger steak back when it was pretty cheap. It’s not now, all my asking for it and buying it has meant that it’s gone from basically unobtainable to being on trays at the various butchers at the market meat hall to having skirt steak passed off as it because it’s become so popular

Cooking hanger steak for 72 hours at 53.5C, then having it with wasabi paste was the best thing ever. It gelatinises the connective tissue beautifully, and it all sorts of awesome.

The long cooks are for cheaper cuts of meat, which stretches your dollar

Yep. I prefer stuff like rump cooked for 24 hours these days over stuff like scotch/ribeye, porterhouse. Maybe I’m just used to it. Either way, I’m not complaining, it’s cheap to buy

@collaroygal I didn’t even know pork chops could be juicy, before we cooked them in a sous vide!

@collaroygal I didn’t even know pork chops could be juicy, before we cooked them in a sous vide!

Spanky is quite correct 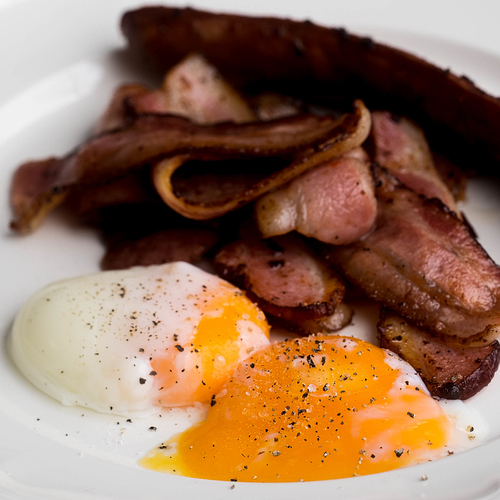 My wife loves it at this level.

It’s one of the great things about sous vide, the metronomic repeatability of it, it removes a lot of variables. (Which is one reason so many restaurants use it, of course.)

OTOH, I think blanching it for that long is too much, so on Monday (probably, due to fasting) I’ll try it with about 75 seconds blanching then 45 mins at 63.5C.

I also put another egg in with this morning’s batch that was also blanched for 90 seconds, but I’m leaving it in the SV until lunchtime, to see how much - if any - difference it makes if I cook it for four hours rather than 45 minutes.

Also worth noting, if the eggs crack when you’re blanching them, they’re fine to sous vide. At least one of the ones in the pic above had cracked, along with one from yesterday’s eeggsperiments.

Does anyone have one of these? Sam’s Club has it on sale for $99.99 and I am really tempted but can’t find a lot of reviews.
https://www.samsclub.com/sams/dash-chef-digital-sous-vide-10qt-appliance/prod22310070.ip?xid=plp_product_1_3

The amazon reviews on it seem quite well. You might want to google it to see if you can find any other reviews! Don’t see why it wouldn’t work! If you get one let us know how it does! 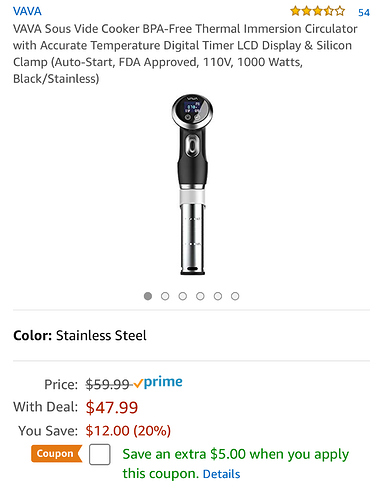 At that price I would grab the Anova off Amazon. $99 free shipping.

At that price I would grab the Anova off Amazon. $99 free shipping.

Yeah, good call, I would too. (Unless there’s some compelling reason not to.) It’s got a good track record, you can use it in containers of varying sizes, and so on. Also, you can control it via WIFI

Far out Mike, I said I’d shut up about it, and now look what you’ve made me do…

My only thing is for having a container already it might be an easier product for the less tech savvy.

My only thing is for having a container already it might be an easier product for the less tech savvy.

And this is also true. My Breville (SousVide Supreme in the US, I think) has a lot less setup than the Anova, agreed. 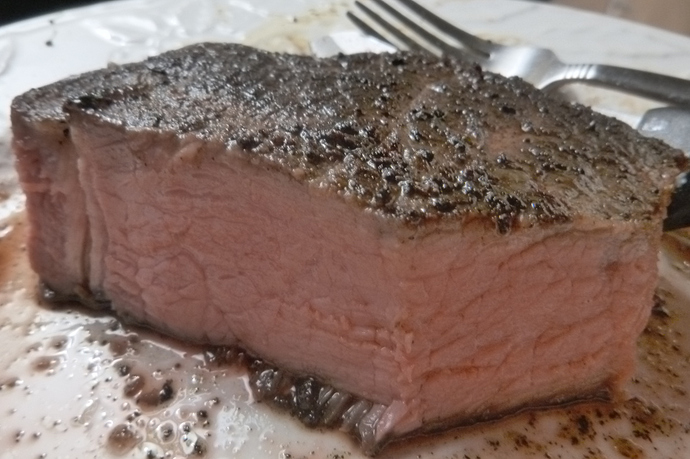 Well damn it, I tried twice, and both times the color balance makes this look more well-done than in real life. I ate up all the divine salted and buttered broccoli during this process, and ate a good bit of the ribeye steak. 3 hours at 133° F or 56° C. I think the picture looks like it’s a little past Medium, when in reality it was between Medium Rare and Medium, probably closer to Medium Rare.

My wife doesn’t like gristle or fat, so I went for a relatively long cook time in an attempt to render things out and tenderize it all. Just put the steaks in the bag, nothing else. When the sous vide cooking was done, dried the steaks off and laid on the garlic salt and pepper, both sides, before searing. Charred it in a hot stainless-steel pan with butter for about 30 seconds per side, and held the fatty edges of the steaks against the hot metal of the pan, to further melt and render the fat out into the pan. Once the steaks were on the plate, I poured the hot fat/butter/spicy juice from the pan over the meat. Could not ask for a better piece of meat.

So…newbie question alert - what are we all using for the bags?

I used Ziploc gallon-sized ‘Slider’ bags (as opposed to the ‘Zipper’ type). I’ve read that they are fine for lower-temperature sous vide cooking, and for shorter times. Some vegetables need much higher temperatures and this, apparently, is where the Ziplocs may start to break down/let water in. Worked perfectly.

Would like to get a vacuum-sealer in the future, and there are some comparatively good buys on rolls of vacuum-seal material.

Thanks for that. I’ve got the ziploc baggies in multiple sizes (all above board

) so was hoping they’d do until I’ve sorted out a vacuum sealer. My plans at the moment all involve meat so I should be OK.

I use a vacuum sealer, because I do this and then freeze it. Then take it straight from the freezer to the sous vide and it’s golden. 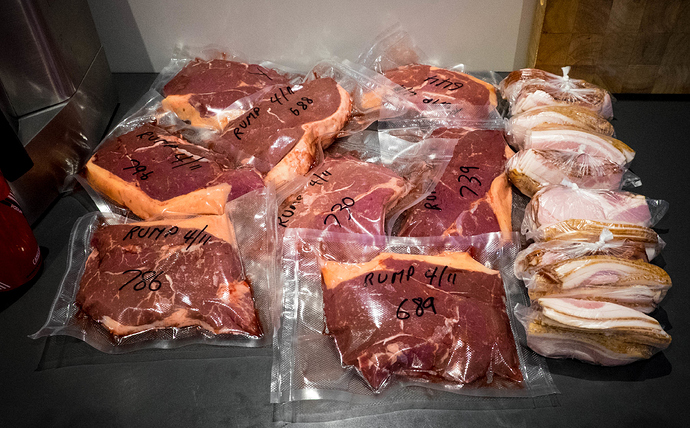 Husband spotted a vac sealer in one of his card points/rewards thingies so I’ll take a closer look.

Husband spotted a vac sealer in one of his card points/rewards thingies so I’ll take a closer look.

Check reviews, some a re better than others. My Sunbeam I had was a POS, but it looked fancy