The first chart is misleading because it’s estimated flu death, not actual and the USA population is 33 times that of Sweden.

The second chart is also misleading since the USA population is 33 times that of Sweden.

Death RATES have nothing to do with population sizes.

I see that some countries have a zero COVID policy. This sounds terrible to me (I mean- it sounds lovely by itself; if only that were doable without devastating society…).

What happened to the idea of flattening the curve?

Eradicating the virus is a completely different goal.

@amwassil
The Sweden trends are now looking better and better, and I think especially if we can take into account the lessons they learned about elderly homes, their approach is an excellent one - but those charts must be absolute numbers and not percentages.

I think Sweden got shunned by the other European countries this summer and that maybe helped them getting a better grip on the virus. There was some travelling happening elsewhere that has led to rising cases. My suspicion is that Sweden may see its small rise as well as it gets welcomed back into the fold.

From the virology blogs:

Not every individual in a population need be immunized to stop viral spread, but a sufficient number must become immune to impede virus transmission. Infection stops when the viral load drops below the threshold required to sustain the infection in the population. This effect is called herd immunity. Is varies between 80-95% depending on the virus and the population.

OPV can spread to non-immunized individuals because it is shed in the feces (not urine nor antibody, as you wrote). When it infects a non-immune person, it replicates in them and effectively immunizes them. Herd immunity does not depend on the spread of vaccine from one person to another, only the number of immune persons. Inactivated vaccines, which do not spread from person to person, induce herd immunity as well as live vaccines.

OPV spreading contributes to herd immunity because it increases the percentage of the population that is immune. However, spread of vaccine is not the concept embodied by herd immunity.

The vaccine against smallpox, called vaccinia virus, is a live vaccine and also spreads from person to person, effectively increasing the number of vaccinated individuals. However, I wasn’t referring to this virus during my explanation of herd immunity.

The point is that herd immunity is conferred when immunity of the population reaches a certain level. Whether that level is achieved by immunization programs, or by the spread of vaccine virus from a vaccinated to a non-vaccinated individual does not matter. …” …More 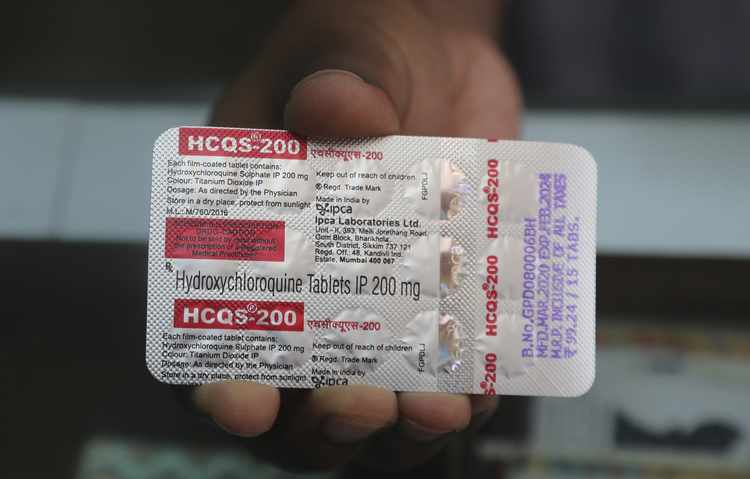 An Effective COVID Treatment the Media Continues to Besmirch | RealClearPolitics

Found this information on Dr. Rhonda Patrick’s quite interesting:

“…One mechanism by which quercetin exerts its antiviral effects might lie in its capacity to serve as an ionophore.

Ionophores can transport ions across cell membranes, which is important in viral disease when it comes to the movement of zinc, an essential mineral. Zinc blocks the replication of viruses, but it can’t enter cells without a transporter[1]. Quercetin is a zinc ionophore.

Clinical trials are currently underway to determine if quercetin (as an ionophore) can prevent the replication of SARS-CoV-2, the virus responsible for COVID-19. Learn more about this subject in this clip from our recent COVID-19 Q&A: " Quercetin’s role as a zinc ionophore* ." …” …More

COVID-19 Update 8: Zinc and chloroquine for the treatment of COVID-19?

[1] “…Ionophores. There are compounds that can bind to and become incorporated into biological membranes, forming a pathway which increases the membrane permeability to certain ions. They are relatively small molecules with a hydrophobic surface, which allows them to enter the lipid bilayer. Two types of these molecules are known: the mobile carriers and the channel-forming ionophores.

Channel-forming ionophores. These molecules are inserted into the membrane generating a hydrophilic duct through which ions can pass. An example is gramicidin A, a peptide consisting of 15 amino acid residues. This antibiotic forms a transmembrane pore that is formed by the association of two molecules, which allow the movement of monovalent cations (H+, K+, Na+).

Similar to the channels, ionophores allow ion flow only in the direction dictated by the electrochemical gradient. …” …More

Taiwan definitely needed a strict quarantine. Normally, over 2 million people were going back and forth to China…

Death RATES have nothing to do with population sizes.

Comparing Sweden to the USA is like comparing a single US state to Europe.

Sweden isn’t out of the gate yet.
68,263 Currently Infected Patients
https://www.worldometers.info/coronavirus/country/sweden/

I’ll be back on tuesday to see if the Swedish weekend effect @OldDoug was talking about in the past will continue.

How bad is covid really? (A Swedish doctor’s perspective)

Ok, I want to preface this article by stating that it is entirely anecdotal and based on my experience working as a doctor in the emergency room of one of the big hospitals in Stockholm, Sweden, an…

Comparing Sweden to the USA is like comparing a single US state to Europe.

definitely! And there are other reasons that the two don’t compare. The main one that comes to mind is the unfortunately the US population is on the whole is much less healthy (actually I don’t have the precise numbers to back that up but I’m pretty sure it’s true).

Sweden isn’t out of the gate yet.
68,263 Currently Infected Patients
https://www.worldometers.info/coronavirus/country/sweden/

I’ll be back on tuesday to see if the Swedish weekend effect @OldDoug was talking about in the past will continue.

I think that given the way that viruses move through different areas of a country, it’s unlikely that we’ll ever see zero cases in Sweden, so what’s important is the trend, which so far is looking great. The very good news - maybe, hopefully - would be that we’re seeing that a country can follow that very classic virus curve without an extremely high total death rate.

This is their COVID death rate, and I would agree with you that the jump on August 7 is worth looking at carefully (is it going to head back up?). What would “out of the gate” look like to you? 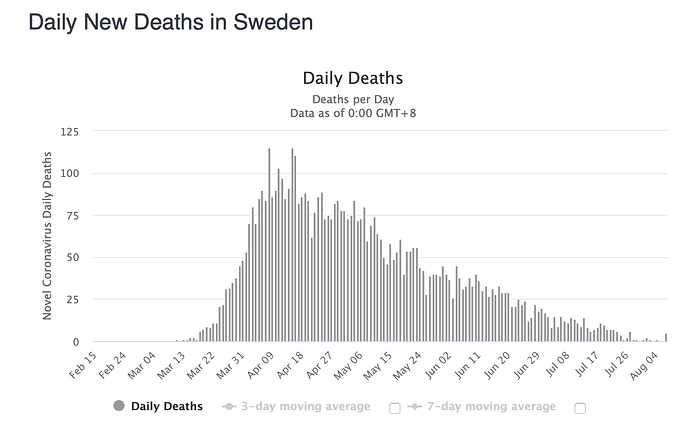 You can present all the evidence to the contrary you want. People believe what they want to believe.

This Swedish doctor is describing the results of what the experts knew in the beginning, but seem to have forgotten.

Sweden didn’t flatten their curve (by much, it is my understanding that some measures were taken), and other countries we decided we would try to save lives by drawing out the curve to let hospitals prepare. There was no talk ever of hiding until it disappeared, until politics got hold of it.

Publicly available data shows no causal relationship between government orders and COVID-19 mortality outcomes. Sweden’s all-cause, per-capita mortality for 2020 is approximately 290 per million above the prior five-year average, while lockdown-loving New Jersey’s is almost 1,900 per million above the prior five-year average, and Michigan’s is over 700 per million. (In case you suspect Sweden “naturally” locked down on its own, mobility data reveals it didn’t.) The mainstream media does not report this. Instead, its energetic smearing of Sweden, coupled with its pseudo-scientific insistence that lockdowns do anything more than delay the inevitable, helps politicians exploit the human tendency to mythologize.

Publicly available data shows no causal relationship between government orders and COVID-19 mortality outcomes. Sweden’s all-cause, per-capita mortality for 2020 is approximately 290 per million above the prior five-year average, while lockdown-loving New Jersey’s is almost 1,900 per million above the prior five-year average, and Michigan’s is over 700 per million. (In case you suspect Sweden “naturally” locked down on its own, mobility data reveals it didn’t.) The mainstream media does not report this. Instead, its energetic smearing of Sweden, coupled with its pseudo-scientific insistence that lockdowns do anything more than delay the inevitable, helps politicians exploit the human tendency to mythologize.

It’s a sad thing when a blogger is so unaware and/or so bent on deception and dependent on the gullibility of readers. It is nonsensical to compare Sweden with New Jersey. There is no excuse for the writer not to know how important population density is in this matter, or that New Jersey is nothing like Sweden in this respect (NJ is more than 20 times as dense).

The timing of the virus spread was different - Sweden had more advance warning. NJ is also substantially inseparable from the New York City metropolitan area - imagine Sweden being stuck onto an enormous, very dense city with more than twice the population of Sweden. The writer makes herself ridiculous with this kind of obtuseness.

She also attempts to downplay the measures Sweden instituted to slow the spread of the virus. She is simply and horrendously incorrect, there. (Traffic out of Stockholm fell 90% for one measured time period, for example.) Either she has not bothered to discover the truth about Sweden - while it’s been via gov’t suggestion and request, rather than lawful mandate with penalties for nonadherence, there has been a LOT of social distancing, closures, etc. - or she’s depending on nobody fact-checking her silly, made-up story.

Both Sweden and NJ (and Michigan, for that matter) have limited the spread of the virus. There remain many very vulnerable people in all three areas; neither Sweden nor the other two are about to expose these people in the name of “herd immunity.”

The extreme weakness of the author’s argument is highlighted by her dependence on illogical arguments and outright lies. She makes herself instantly and tremendously dismissable.

If you check out the author’s social media, you’ll see that she’s hardly any authority on the virus (much of what she says is just laughable), and that she has a terrific penchant for conflating things and being intentionally deceptive.

The extreme weakness of the author’s argument is highlighted by her dependence on illogical arguments and outright lies. She makes herself instantly and tremendously dismissable.

If you’re registered at the RealClearPolitics website, you can read the comments - the piece is really just a joke and lots of people see it immediately. But yes - once one throws away logic and rationality, they should be laughed off the stage.