Hi everyone. I have decided to give up dairy for 30 days, my reason being I believe it is inflammatory. I’ve had a sniffle now for the longest time and some increase in lipedema swelling and leg aches. 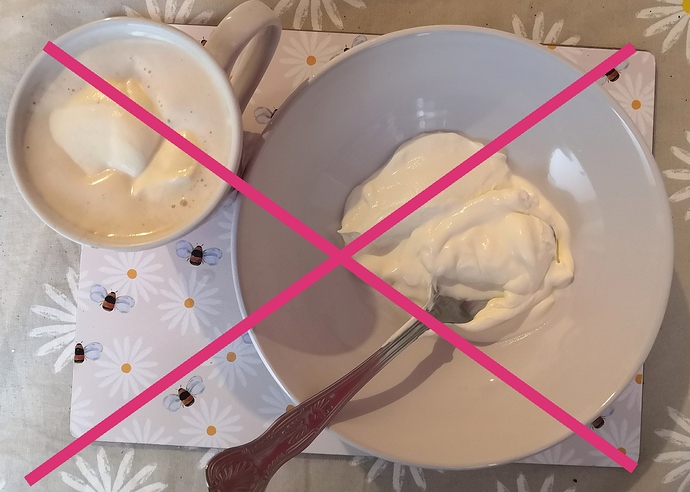 Good luck! I definitely won’t join or I would go way off keto

I need my darlings more than ever and use them more than before.

I tried to imagine life without dairy for some minutes. I can’t. Hopefully it won’t be too hard on you!

Good luck! I hope you find the results you want.

Dairy for me about limiting exposure. I’ve read plenty about its inflammation effects.

On the other hand: It’s almost carb free. The good dairy has probiotics. A byte of cheese before work or before bed does me well. I’ll take electrolytes with as well. Cream & decaffeinated coffee makes a low protein meal for me.

I believe you will have positive results! When you eventually get into to dairy; think exposure like the sun.

Best of luck - I’ve just started eating dairy after not having it for a couple of years.

If you’re anything like me, you’ll find you just stop missing it after a few weeks.

Thanks Shinita, I am usually pretty determined when I make up my mind about something. Obviously, if you have no real issues with dairy then by all means keep it in your life.

I want to see if this 30 day challenge will do away with the rest of my lipedema pain of which I have experienced of late an increase. I will update 1 week from now, with hopefully some relief of symptoms.

Thanks Pete, I am hopeful, and as ever willing to give anything that might be beneficial a go.

Hopefully that will be the case. I fell in love, hard and fast, with cream even though when I gave up carbs when I went from HCLF to Keto, I didn’t miss any of the carby foods I had given up at all.

I grew up on the farm drinking cow’s milk straight from the source, and I still love it. But for now have cut back on the milk but not the heavy cream. I substitute almond, whey protein and heavy cream for my whole milk. It is okay but not the same.

I love cream too but it’s not that very hard to keep myself from it. For a while. Never did a month since my lactose-free years ages ago

The same with the others. No cheese for 1-2 weeks? I can do that now.
I can’t really exist without sour cream for long but I stop talking about these darlings…

You still have lots of food items! More than I have on my dairyless days, that’s just meat and eggs and while it sounds great, I do like and need more variety than that. But you can make lovely scrambled eggs with bacon and vegs, for example

That sounds a great idea for me lately… I fear 2023 brings back some of my lost desires towards certain vegs. A tiny amount can make a big difference. It still fits into my carnivore-ish but I aim for stricter styles if possible.

Still hard to imagine life without dairy, I use them so often even if usually in small amounts…

I used to like homemade coconut milk. I remember making it almost every day… I made quite a few recipes to use up the leftovers.

And eggs are pretty good at substituting milk in some drinks. Sometimes my eggy coffee really feels like a milky one even though it’s different, richer but still have some similar feeling. I actually use 2-3g butter in that and it helps but if I used some coconut or almond milk, it wouldn’t be bad either.

@cvkemp: I gave up milk even before low-carb, it lasted for many years but now I added it back. I even can buy some nice raw stuff. I don’t care about animal sugars, they don’t seem to change anything important. It doesn’t mean I don’t aim for lower-carb if I don’t mind but if I fancy some dairy, I eat it.

I have no intention on totally giving up dairy products. I still add whole milk to my smoothies a time are two a week instead of heavy cream. I believe I am off setting that with my daily fasting of 18 or more hours per day. At this time I am losing a couple tenths of a pound every couple of days.

Thank you for your input. Regarding the sun I actually have to limit my exposure to it, due to both my roseaca and the medication I’m taking for it, efracea. It will be interesting to see what this 30 day dairy free challenge will reveal, if any of my current symptoms will improve.

I can’t drink milk at all without feeling ill, sluggish, headachy and nauseous. The heavy cream didn’t do that to me and I seemed to tolerate butter, but I am now keen to see if I can eliminate the rest of my lipedema pain by eliminating dairy. So for me there is an incentive to do it. If your body is doing just fine consuming dairy then by all means enjoy it. I do believe, however, dairy affects women differently than men.

I am researching the possibility of me leaning more towards Atkins which does allow me to have my milk but I will still limit it in how much and how often. I did the Atkins diet way back in my 30s and did lose back to what I weighed when I turned 21. What destroyed me was eating grains when I went off the diet.

Yes, because I reinstated vegetables (though I only still eat them in small amounts, to accompany a dish, say a few broccoli florets or cauliflower florets, a few green beans or some cabbage) I find I have options beyond dairy. It was when I turned from keto to carnivore I seriously began over-indulging in cream. It became my dietary highlight, and go to fat source. Without it I’ll turn more to eggs, bacon, nuts and avocados to achieve the same amount of fat and calories, as well as increase the variety of meats and seafood. Without the cream I will be consuming a considerable less amount of fat so will have to replace it wisely. It’s lucky I like avocados.

The grains can be inflammatory, they certainly were to me. So much so before keto that I took a celiac test which came back with the result being abnormal, just not abnormal enough that my GP thought it was even worth considering. When I went keto simultaneously giving up gluten/wheat and all manner of carbs I remember how baffled I was by the fact that my lipedema pain just went. Was pretty much gone in days. I was only having a few drops of cream in my coffee back then. Fast forward to me doing carnivore and I was eating bowls of cream and inflammation was on the rise again. I may reinstate dairy after my 30 day dairy free challenge depending on how it goes, but grains I am just staying away from.

More like dairy affects different people differently but of course there may be some correlation, I don’t know…
I just know that I handle dairy well, apparently. I suspected it’s not the case as I felt a tad different after consuming much of them… But I drank 1 liter of milk in a few hours and nothing so I suppose I shouldn’t worry. I still wouldn’t live on dairy but a little here and there is fine. I had plans to try out no dairy and well, I did, for 2 days… I experiment with easier and more useful or interesting things now.

A tiny veg can spice up a meal

Sometimes I make eggs in purgatory (so easy and I don’t need to make a carby dish for my SO… and then I eat some too) and I eat the tomato sauce stuck to my eggs… Maybe a tiny bit more… 40g onion in my scrambled eggs makes a difference too.
I dislike avocados but I love almost anything fatty so adding fat is no problem… Once I overdid fat like crazy on keto with chocolate… I can eat pretty much of it and mine is quite fatty. Almost zero sweetener so yep, much fat fits into it especially that I prefer more fat and less cocoa in mine. That’s not the right direction for everyone, not even for me but sometimes it’s nice and helps with fat…
If you plan some more proper keto, can’t you just eat fatty meat? I can get any amount of fat I might need from properly fatty meat if I try… But of course, I have my eggs too. On lean meat day they help to balance out things though they aren’t enough. With some bacon, it’s a tad better

But I need my fattier meats I can eat in bigger amounts, bacon is just some spice in my eggs, too salty to add much.

I just need to avoid overdoing sugar (all plant sugar I mean). And peanuts. But I would eat walnuts off carni. I LOVE them. Easy to live without them but they are lovely. Impossible to overeat. Great stuff. Highly enjoyable but not dangerous. To me.
And there are so many lovely nuts and oily seeds! My SO eats a lot of them, even his porridge has walnuts! And one of his usual breakfast cakes has 90g poppy seeds as flour. It’s highly rich in Calcium, even more than sesame seeds that he consumes all the time as well as his bread has a lot.

I think I will go back to keto one day for a while… And enjoy my old favs without adding back vegs (except a tiny amount. maybe a pickle) and other carby things. I don’t need those. I could do keto so much better than before.
But maybe I will just have the occasional off day as always… No, I am curious what would happen. I probably would enjoy myself for some days and go back to close to carnivore again. I do love that food best. But giving up my other favs for good…? I don’t need that.

I like nuts too, my favourite are almonds, I have resumed my habit of eating 10 almonds in the morning. It’s nice and I don’t need more.
Yes I can replace most of the fat from that cream I am sure with my usual fatty meats (bacon and gammon joints, pork shoulder joint, smoked mackarel and salmon) as well as avocados and some nuts, such as walnuts and almonds. It’ll be interesting.

Yes, it’s varied enough I think, with addition of a few leafy greens and cruciferous vegetables, bell peppers, mushrooms, and perhaps I’ll reinstate strawberries and raspberries. I doubt I’ll bother with coffee without cream, but I still have my green tea which I love, and my camomile tea. So drinks and beverages are not a problem. I tend to put both lemon and lime in my water for potassium as well as to improve taste. So yes, I think there will be good variety. Tomorrow I shall dish up eggs, bacon and mushrooms for my SO and I, and later on steamed broccoli florets with my favourite Aberdeen Angus beef burgers. Already thinking ahead.