Covid-19 versus the Flu

Why do you say that, Vic? I think it’s pretty well agreed that most people will eventually get the new coronavirus. By ‘more contagious’ I mean it spreads easier/faster, and apparently that is the case.

FactCheck .org Dont get me started on Fact check

Well, the guy said what he said, regardless of whom he was addressing. It’s really not an issue, despite some people trying to maintain otherwise.

I certainly agree that many consumers are insane. Have to look in the mirror there once in a while myself.

What I’m saying is that most of the economic downturn was already guaranteed, before any gov’t restrictions were put in place. Cruise ships were empty, airplanes 93% empty, people had largely quit going to restaurants, raw materials prices were plunging, demand for manufactured products was falling off a cliff, etc. Even where some unfulfilled demand was present, there were often supply chain problems that meant production was slowed or halted.

I think we have a long and hard road ahead of us. There is cause-and-effect at work that mean more layoffs, etc., in a cascading process, and this will happen even if restrictions are lifted instantly. Gov’t doesn’t have a magic wand it can wave and put things back to “normal.”

It depends where one is. No question about it - it’s going to brutally suck for a lot of people around the world. In the U.S., unemployment payments will be extended, but that doesn’t “fix” everybody. The state governments, which have to balance their budgets, are in for an absolute horrible time.

It depends what the illness is. With something like Ebola or MERS, they’re so lethal that there wouldn’t even be argument about it.

Fair enough we agree to disagree?

I am pasionate about what I feel on this as You are, We each made some points and that was good

Fair enough we agree to disagree?

Sure - it goes even farther than that, I think. Nobody really knows for sure what all will happen in the future, not with death numbers, the economy, etc. But we’re going to find out…

This is a great article relevant to this topic. Think covid-19 deaths haven’t been counted right? Dig into where flu death numbers come from. 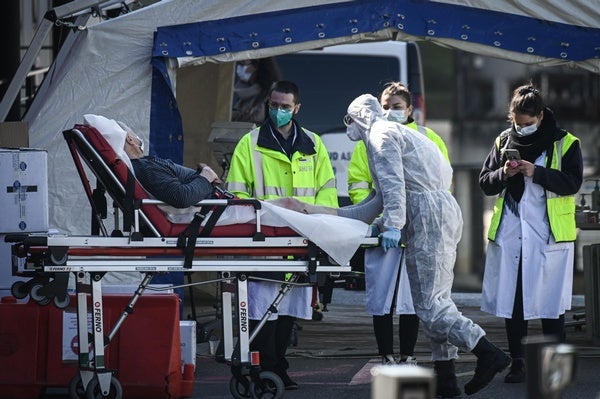 The former are actual numbers; the latter are inflated statistical estimates

Good post. That info is freely available but for some reason it doesn’t appear to get much coverage.

I’m glad she posted it because it further reveals how corrupt the system is with using fear to force people towards useless vaccination.

This is true, no matter what happens how things are handled what the consequences are We all have to live with it

Thanks. Not the consequences I draw from it, haha, could also be that the flu vaccines are actually more effective than generally thought?

What I’m saying is that most of the economic downturn was already guaranteed, before any gov’t restrictions were put in place.

I agree. And we can’t just blame proactive government ordered closings when we also see reactive closings after viral outbreaks at meat packers.

It may not be the Flu, but only because it’s literally not the Flu. The Flu constantly causes MAJOR complications in older people, leading to hospitalizations, ICU, Pneumonia, death etc. There’s also been people way up in the years that have been all over the news because they beat Covid. The Covid vs Flu debate is pointless and has been beaten to death.

I’d say their WAY more effecting than they get credit for. How many people do you really see getting the Flu? For something that’s always around and constantly mutating around the vaccine the fact most of us go decades without it in packed jobs and public areas, kids in school and don’t get it is pretty telling.

Whether one thinks it’s right or wrong, restrictions are going to be lifted long before we have a vaccine or truly, game-changingly effective antiviral drug (IMO)

Given we may never get either of those things, it’s hard to disagree with that.

I got it back in February and it was pretty mild but I was sick enough to stay home. it lasted about 10 days all in all but left me with a cough for another three weeks. I’m 65 and never get the flu. With this I FELT like I had a fever and had nite sweats around days 4-6 but I never had a temperature in the day time. It never did bother my sinuses much but it started with a sore throat while I was on my 3rd day of a 4 day backpacking trip and I noticed I was slightly fatigued a little more than normal. I have Kaiser and they are not doing antibody testing.

Sorry - just to clarify since this thread is discussing regular flu and COVID. Did you have COVID-19? Either way, glad you got well.

This is a great article relevant to this topic. Think covid-19 deaths haven’t been counted right? Dig into where flu death numbers come from.

I’m glad to see that article - a link to it appeared in another article on the “Governmental Response to Covid-19…” thread, but it never worked for me. That other article was written by a doctor who was essentially arguing against stay-at-home restrictions, but he still referred to Dr. Faust and flu mortality being grossly overstated and probably much lower than 0.1%.

If nothing else, then yes - we should count deaths from flu and Covid-19 the same way.

There probably are some arguments going the other way - that the CDC really isn’t so inaccurate for the flu. I do like the doctor’s approach in noting that the numbers really didn’t make sense based on his experience. Even the CDC is capable of errors. If not at first glance, then with a little deeper examination things should be logical and make sense. If the CDC is just trying to skate by on its name, with this deal, then perhaps they should take a harder look at reality.

I assumed it was a given that I had COVID since this is a COVID topic. I have not had the flu (that I know of) in 40 years. This was not the flu. I know a few others that are certain they had it but it was before the lockdown and there was no testing yet and no one was sick enough to call the doctor although I told my doctor about it a few weeks later when i was in for a prostate MRI so he ordered a chest XRay which was “clear”

Sorry - just to clarify since this thread is discussing regular flu and COVID. Did you have COVID-19? Either way, glad you got well.

I’m glad she posted it because it further reveals how corrupt the system is with using fear to force people towards useless vaccination.

That’s pretty broad - and as stated, very far from reality. Compare a relative handful of deaths from flu vaccines to what can happen with no vaccination and no immunity, as with the flu killing ~675,000 Americans in 1918-1919.

Thanks for the clarification. Were you tested for the virus or the antibodies?

My 76-yo neighbor was pretty certain she already had it back in January because she had the classic symptoms - dry cough, fever, loss of taste and smell. She got tested this past week for antibodies and it was negative.

I did not get tested at all because it’s not available with my healthcare provider yet and I don’t want to pay cash for the antibody test that has a percent of false negatives.