If I had an emergency plumbing issue like a broken pipe or sump pump or other home repair problem I’d hope they were open at least for things like that.

The seeds I am more ambivalent about. Those could be ordered online easily enough. But I also don’t see why, like restaurants, they couldn’t set up a buy-online and curbside pick-up for those. I understand that timing is important for those. People need to think more creatively in this situation.

Those could be ordered online easily enough.

Not with current demand. Two of the three companies I order from every year are running 3-4 weeks behind and may ship too late for some parts of the country. I ordered all of mine in Jan and Feb and glad I did.

I have a huge vegetable garden every year so kinda pushed my buttons.

Limit the number of people in your store at one tine, not what they can buy. The businesses are hurting enough already and people are going stir-crazy and looking for projects to work on at home.

I know it doesn’t always work but last year all of my tomato plants came from seeds I took out of Kroger Kumato tomatoes, and they were abundant. Same with orange bushes, potatoes, letting herbs go to seed and saving those. I get that everyone doesn’t do this, but it might be an interesting rabbit hole to dive down and see what’s possible.

Maybe a community seed swap website is in order.

I’ve had mixed success saving seeds. I need a tutorial from @SecondBreakfast !

I have saved tomato seeds from my heirloom variety tomatoes with great results. My pepper seeds were a total failure - not a one germinated the next year.

I used seeds from last year and even 2 years ago and they still sprouted. Maybe not as high a germination rate as seeds packed for this season, but good enough and saved me some money this year

This is a thing I have been wondering about: Does COVID-19 express differently in a fat-burner as opposed to a carb-burner?

Luckily for your proposed treatment, the liquor stores are deemed essential!

I am wondering why we do not hear any numbers about continued infected people and or deaths in China? Granted that the information could be fictitious and unreliable but it seem as if a switch has been flipped over there and shut the virus off? I personally would like to hear more about the regression of this virus at this point.
Anyone have news related to the decline?

This is a link to the daily WHO situation report for coronavirus. For every country it lists total cases, new daily cases as well as total deaths and new deaths.

I’m very doubtful but not entirely convinced it’s not possible to manufacture a viral bio-weapon.

But the level difficulty in getting something so tiny to do exactly what you want it to (even chaotically) is another?

If anybody could harness that type of nano-technology they would rule the world (so it does not kill them to), that’s where doubt has its place?

Viruses are more like tiny machines than a living bacteria which are much easier to kill, viruses simply duplicate themselves using whatever biomaterial available but why?

They really serve no purpose other than to put whatever it is that walks on dirt back in the ground when it becomes over-populated?

When any species has many members that don’t reproduce, that promotes the existence of the species hundreds of years into the future if not thousands of years. The more reproduction you have the more likely that species becomes extinct (over-population; environment and resources cannot be sustained) and that may be the role of a virus?

Seeds were not banned in Michigan, despite all the outrage memes going around. Garden center, flooring center, and painting center, etc areas of stores were ordered to be cordoned off. The seed displays don’t necessarily have to be INSIDE the garden center, in fact, Walmart typically displays theirs inside. Lowe’s puts the seeds right in the entrance vestibule.

The executive order is posted in clear and simple English for anyone wishing to read. You can buy seeds still.

Thank-you for the clarification! I feel better now.

I assume if you wanted to start a home improvement project you could order from Lowes online and have it shipped to your home? Of course you never think of everything and I always end up with something else I need to finish a project!

Depends, they don’t ship everything, and you can’t get everything ordered online for store pickup. May depend on location, but mine wouldn’t sell bags of soil online, I had to pick them up.

True. A lot of places have the soil and mulch in the parking lot (my local Walmart) that you load yourself after paying for it. Is that still an option?

Where I live the nearest Lowes is a 2-hr round trip. The nearest Home Depot is an hour, 20 minute round trip and it is not a standard size store. They don’t carry any parts for sprinkler systems like Rainbird for example.

They may do that here (PA), not entirely sure. I did see pallets in the parking lot but the staff I asked didn’t have the insider knowledge on that lol. I feel you on the distance for sure. You can always try calling the store…just do it when you have plenty of time and nice cup of tea. The person on the other end is going to be having a hard day

There was a terrible bug running around with a dry cough, fever starting around the end of last year and running through several months into this year. Many people had this. Everyone I know in my family had it. It was a rugged one. And of course now we wonder. When they finally get a good antibody test out I would surely like to be tested.

Update: I was tested with the Cellex test approved by the FDA. I have antibodies in my blood from COVID-19. And there you go.

Yes, so would we! I took my little grand daughter to our doctor because she had a fever for a week (we were giving her Advil, and tried Tylenol too, and neither brought down her temperature so I was worried). They said it was just a viral infection and that it would go away but the poor little thing was not herself and very lethargic for about 2 weeks. I really wonder if we all had it then.

Just got sent this from my Grandpa. I ran out of paracetamol and was taking ibruprofen cos I had no choice. But I won’t now. This must be why I don’t seem to be getting better. I’ll stop taking it now. God, what a shock. 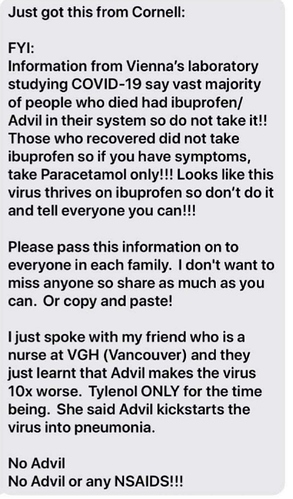 Honestly, it’s that American way of making fun of every-damn-thing that I love the most. (I still think “The mother of all pizzas!” wins for that category, back in the day.) The more terrible the better.

I think I posted the Quarantine song video a week or two ago. In case you missed it:

Here’s another one. Worse music but funny. “My Corona”

…I’ll just see myself out…