Mark, the short version is that I don’t think we need be at each other’s throats.

We are seeing different data, apparently, and in the end I think that will be worked out. I also don’t think it matters all that much in this case.

The longer version is that that webpage is still incomplete/behind the times - the CEBM webpage specifically says that only ONS data through the 25th of April was included. And as I referred to above - there was a big change on the 29th of April, i.e. Public Health England said, “For the first time from today, Wednesday 29 April 2020, the government’s daily figure will include deaths that have occurred in all settings where there has been a positive COVID-19 test, including hospitals, care homes and the wider community.”

That’s still the case with the latest CEBM update - I just checked. I’m not sure where the discrepancy is coming from - here’s what I see right now: 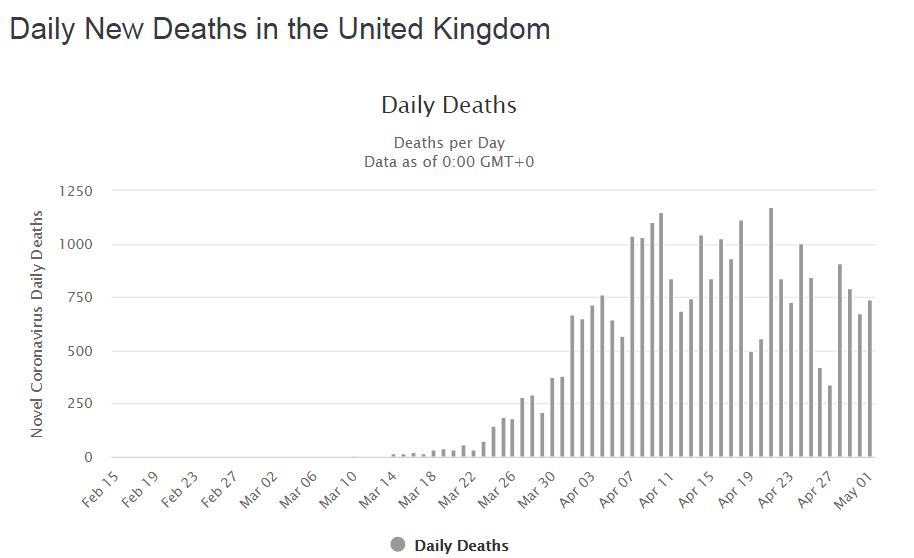 I looked around, and I don’t see a “total deaths thus far” number from CEBM. Are you and I even seeing the same total deaths number? As of right now, I’m looking at 28,131 for the U.K.

Regardless of all the above - whether we say 8 April or all the way out to 21 April, it’s still in the range that most other countries have seen after lockdown - you originally asked about what if U.K. deaths had already peaked before lockdown measures could have had a significant effect. Restrictions on personal movement and contact do reduce the rate of transmission, that “R0” number, and it makes a huge difference - given the geometric progression of transmission, even just one case of self-isolation can greatly affect the number of cases later on. 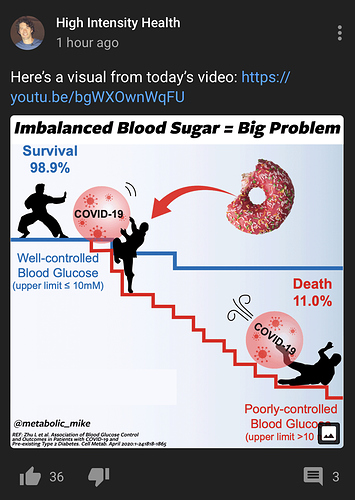 Here too - where did you see this? Average hospital bed utilization in the U.S. is 60 - 70%. Do you really think it’s less than that, now?

How could it NOT be in most parts of the country with all the elective surgeries postponed and people afraid of hospitals? Our hospital parking lot is virtually empty and it is normally very full. Thankfully our governor is allowing elective surgeries again, starting this week.

How could it NOT be in most parts of the country with all the elective surgeries postponed and people afraid of hospitals? Our hospital parking lot is virtually empty and it is normally very full. Thankfully our governor is allowing elective surgeries again, starting this week.

It’s far from just that “people are afraid of hospitals.” I’d say that a lot of people should be wary, in the first place - Covid-19 or not, lots of people (the CDC says 1 in 31 hospital patients, health. gov says 1 in 25) get a healthcare-associated infection. Many of those cases are darn serious - C. diff, MRA, CRE, MRSA, etc. - this stuff is no joke. 50,000 - 100,000 people die each year in the U.S. from healthcare-associated infections.

But the main reason that hospitals postponed elective surgeries was to try and preserve the supplies of personal protective gear for medical personnel. Regardless of all other things, this has been a big problem.

Elective surgeries starting again - sounds good - but you can’t generalize about the whole country from your own state or your own hospital. In Arkansas the virus outbreak is still in the very early stages - there are only ~1400 active Covid-19 cases right now, and I’d guess that the vast majority of them are not hospitalized. I can certainly believe things are slow at your local hospital. But in looking at just 10 or 11 states across the northeast and into the midwest, there are ~700,000 active cases and it’s a different story.

The U.S. does have available hospital beds most places right now, but at the same time it doesn’t take much to change that. The number of U.S. hospital beds has really declined over the years, even as the population has grown - hospitals trying to be more profitable, etc. 1975 - more than 6 hospital beds for each 1000 people. Last I saw it was 2.2.

But yeah, low population density helps. We have 16 patients on ventilators in the entire state and 80 COVID deaths

I think Arkansas is still in the first wave of virus infection - things are going slow (very slow) and there have been only 83 deaths. I just can’t believe that for deaths or new daily cases the peak is behind us, there.

I think Arkansas is like most of the country - the virus outbreak is well behind New York City. While there are a few “in-betweens” (states where deaths and cases are substantial), NYC and New York State are the real outliers in the U.S. The state has over 1/4 of all cases in the U.S. at this point, and 35% of the deaths.

For the U.S. as a whole, right now daily deaths and new cases have leveled out or even started to decline a little. If you remove New York City, they’re both still increasing. 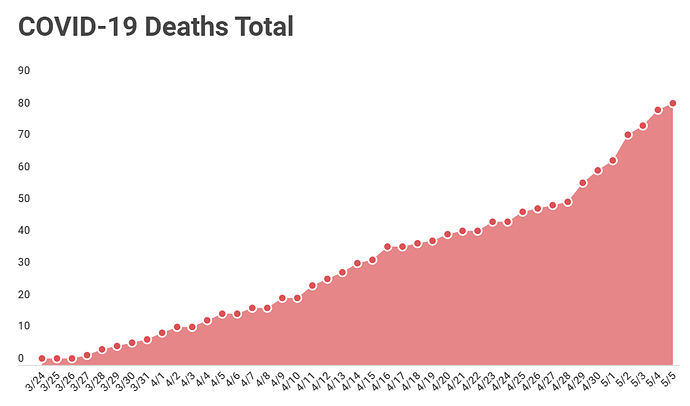 To me, it looks like deaths picked up in Arkansas after April 28.

I can’t predict how many people will die in Arkansas. Lots of variables like demographics, health statistics, etc. Maybe there’s something that will make a big difference that at this point we don’t know about - different virus strains (?), etc. For now, Arkansas has tested 2% of the population, and 6% of those have come back positive. This tells me that there’s a long way to go.

New York State has a fatality rate of 0.126% right now. It may not go all that much higher, but even if we just take that as an example, it would mean 3829 deaths for Arkansas.

We had peaked before an outbreak at two prisons. They are tracking them separately from the general public since they are confined, although your numbers represent all cases, including prisoners

Not sure if we are seeing a second wave or not but the curve is flattening and of course the deaths will lag the cases by 2-3 weeks.

I do remember you mentioning the prisons, Jane, so yeah - that would affect things, given the really small numbers thus far. I certainly don’t have a crystal ball here, but I just can’t believe that Arkansas is anywhere even near the first real peak. Testing should eventually sort it all out.

Yeah, only time will tell. They ARE trying to test more and they are opening up businesses and dine-in next week with social distancing so I expect a spike

Lost my uncle yesterday, mother on March 18th, and my nephew 10 days ago, so I take this serious!
Be SAFE out there all, this is nothing to ignore!

I’m so sorry for your losses.

Take care and stay safe Ron. I’m sorry for what you and your family going through.

Wow, Ron that is so sad, I am so sorry --I knew about your mom previously, but not about your nephew and uncle =(. Were all three of their deaths Covid-related? Did they have contact with one another? That is just so heart breaking for you. Prayers for you and your family. Take care.

My mom was in the town I live in. She was in a facility and that are not saying it was Covid but I suspect.
My uncle was in another city in Idaho and they are not saying what the cause of death was yet. My nephew took his own life caused from depression.

Awww so heart breaking for your family. My husband’s side of the family has had many suicides and it is very hard (his grandpa, his brother, his mother tried 4 times, and a few of his cousins). It is really so sad and very hard on the family --Take care and I am so sorry for all your losses --Hugs and Prayers.

Thank You @Momof5
His mom did the same thing last year and his step dad did it about 7 years ago. I never thought it was genetic but sure makes one wonder?

I think that there is a genetic component for sure, since a lot of my husband’s family has done this. My husband has Bipolar and is on meds for that and he told me he thinks that if he hadn’t met me (May 14th is our 30th year anniversary) that he would have as well by now. Our five kids, our grandkids, and me are what keeps him going =).

I was always told that behind every good man was a good woman. Congrats on the 30year anniversary. You be sure and send it off with a bang now!