In hindsight the linkage between diet, specifically metabolic dysfunction associated with a SAD diet and the consumption of highly processed “fake” foods, appears blindingly obvious.

I find this very puzzling and wonder if it is related to the typical myopia exhibited by many health care professionals when you dare to suggest stepping outside of the lorded food pyramid?

Very interesting discussions of this topic can be found as follows:

Because they are addicted to carbs just as much as the people they need to advise.

The NHS cannot make a 180 degree turn in dietary recommendations over night.
It’s quite clear that good diet is beneficial to health, and there are a lot of healthy individuals who don’t follow a low carb diet.
The supermarkets are full of processed foods a lot of which the public are told on fancy labels that these foods are beneficial to health.

If they are feeding people with excess body fat or/and pre-existing vulnerable immune systems with high carbs, low fat, high protein diet or glucose IV’s when hospitalized with this virus as it progresses they are probably killing them by enhancing the pathways the virus uses to contribute to the pneumonia and other damaging things (makes leptin signaling go nuts) it does in my opinion as well as others?

If a person started a high fat diet before getting sick if they have a lot a body fat or impaired immune function (you may not even know you have) is to get on a high fat diet as soon as possible (like right now?) and you won’t end up in the hospital if exposed and if you do let them know about your diet? This virus does not just kill the elderly?

Because people who talk about diet as having a real effect on human health are generally treated as quacks, fanatics, and weirdos.

According to your average person, there’s no practical difference between eating a diet based on white flour and white sugar; a diet based on meat and eggs; or a diet based on vegetables. It’s all personal preference. (I don’t believe this, of course, as I imagine you don’t, but there’s a lot of ignorance and misunderstanding out there.)

I’ve seen several stories about “healthy” young people (<40 and in some cases <30) succumbing to the Wuhan virus disease, and in every case I’ve seen they appeared to be obese, even if they apparenly worked out and/or had good aerobic capacity. One case involved a baseball coach who was a former college athlete - “obviously healthy” goes the narrative, but his photo revealed he was carrying a lot of extra weight and was likely insulin resistant.

Using keto and low-carb diets and intermittent fasting to cut visceral fat would be one of the most effective interventions against this virus that we could deploy.

They probably are putting Glucose drips into all the patients in the hospitals that cannot eat on their own, which is eek!

Nice to see some discussion of this issue on main stream TV in the UK.

Will Canada or the US ever catch up?

Thanks for posting - encouraging to hear this information on mainstream media!

Urgent probe into obesity link to Covid-19 deaths: Matt Hancock orders health officials to find why certain groups including the overweight, men and ethnic minorities are more likely to die.

Mr. Hancock is the UK Secretary of State for Health and Social Care 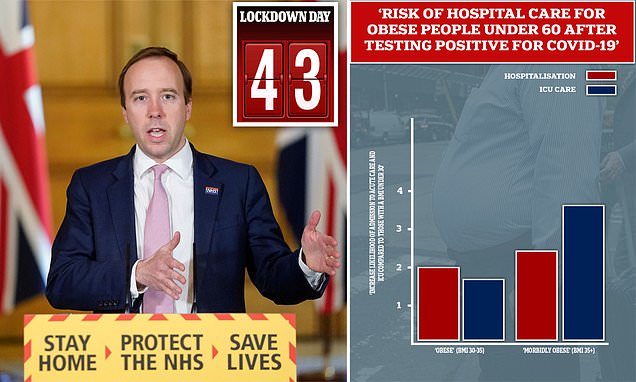 An urgent review has been launched by Health Secretary Matt Hancock into whether obesity, ethnicity and gender raise the risk of death from coronavirus.

I wonder, but somehow doubt, that there is such a thing as a Fatty Acid/Ketone IV drip.

I just got the good news, I’m no longer infected!!! I got through Corona and now I’m allowed out!! I’m so excited.

. It was a close call in early April, and I was stubborn and refused to go to hospital as i hate them. It all worked out though.

Urgent probe into obesity link to Covid-19 deaths: Matt Hancock orders health officials to find why certain groups including the overweight, men and ethnic minorities are more likely to die.

Studies have reminded that cardiovascular metabolic comorbidities made patients more susceptible to suffer 2019 novel corona virus (2019-nCoV) disease (COVID-19), and exacerbated the infection. The aim of this analysis is to determine the association...

That’s just one example - if people can find a search engine that doesn’t scare them too much to use, many more will appear. It’s the reason that it’s not only “old people” who are in the vulnerable category, and why so many younger people are being killed by strokes caused by it, having massive heart issues, and so on. It’s a disease that works via the blood as well as other vectors, that much is becoming obvious, and which therefore has the potential to become an even more horrendous problem due to most people being so chronically metabolically unhealthy.

You are right. Unfortunately people like the folks on this forum, who are willing and, to be honest, are capable of doing this type of research and critical thinking are a relatively small percentage of the population. It needs the big news outlets to dumb down the technical information into digestible bit sized chunks, backed up by the likes of Bonnie Henry, to do any actual good and shift the entrenched paradigm.

Why is nutrition and the consumption of real foods not being discussed in the media or proposed by health care specialists as a societal tool (similar to social distancing) to limit the severity of the pandemic,

If the Whitehouse task force recommended something like we would like to see a reporter would ask the president or any of the task force members if they would be following the recommendation. It’s a lot to promise. Before the virus I thought if i had time with the president to say my peace I would recommend he exercise leadership by fixing diet and exercise and encourage all us baby boomers to do the same as an act of patriotism–the only way to fix the health care system. All this is hugely difficult to discuss because the addiction to carbs is so pervasive.

Not gonna happen on planet Earth. It would require too many people to admit they were wrong about nutrition. We’re 50 years into the biggest nutritional disaster ever - no one’s gonna take responsibility for it.

Not gonna happen on planet Earth. It would require too many people to admit they were wrong about nutrition.

Michael, true that they’re not going to really admit they were wrong, but the pressure has to be mounting - it’s such a clear-cut difference with the severity of the virus infections. Anyway - it’s a good fact to have in one’s back pocket for future arguments with those in the “I have to have my carbs” camp.

Was watching the NBC News about 57 children in New York that are on respirators getting an inflammatory condition from the Covid -19 virus where the limbs get really red and swollen (they were showing actual ICU footage) from babies to toddlers (most likely pre-existing compromised immune systems?) and I bet they are feeding them glucose (IV’s) rather than a high fat diet? Every one of those children were swollen up like balloons! 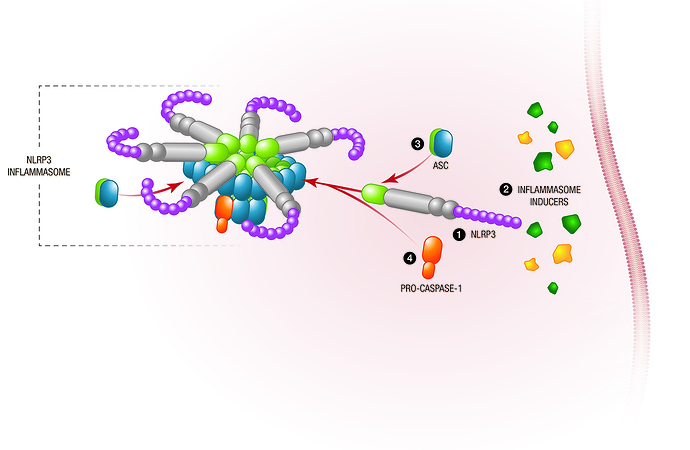 ”…The team found the ketogenic diet, or keto for short, triggered the release immune system cells that produce mucus in the cell linings of the lung and trapped the virus before it became worse . The two trainees are, Ryan Molony who found that immune system activators called inflammasomes can cause harmful immune system responses in their host, and Emily Goldberg who worked in Dixit’s lab, which had shown that the ketogenic diet blocked formation of inflammasomes . Co-senior author Akiko Iwasaki, the Waldemar Von Zedtwitz Professor of Immunobiology and Molecular, Cellular and Developmental Biology, and an investigator of the Howard Hughes Medical Institute said the findings were ‘totally unexpected’. During the study, the team showed that mice infected with the flu virus that were fed the keto diet had a higher survival rate than mice on a high-carb normal diet . …” …More

I wonder if being ketogenically fat adapted and still fat would have an outcome on the below stated research because it does say “…a higher survival rate…” not like all the mice survived lethal doses of the flu virus injected directly through the nose; maybe the fatter mice had a weaker immune system? [image] image link ”…The team found the ketogenic diet, or keto for short, triggered the release immune system cells that produce mucus in the cell linings of the lung and trapped the virus bef…

O…M…G…Being ketogenically fat adapted is like being a bat? Like seriously, that blows my dam mind! ”…The key, they found, is in the bat’s ability to limit inflammation. Bats do not react to infection with the typical inflammatory response that often leads to pathological damage. In humans, while the inflammatory response helps fight infection when properly controlled, it has also been shown to contribute to the damage caused by infectious diseases, as well as to aging and age-related diseases…

This virus does not just kill the elderly?

Definitely not. You’re more at risk if you are 44 years old, obese, with T2 diabetes and high blood pressure than you are if you are 70 with no underlying conditions. Take a look at this data from NYC. It’s pretty stunning. This thing targets fat, unhealthy people.

It’s batshit crazy that the CDC and NIH are not shouting this from the rooftops. People think it just kills old people. Not true. Since 70% of us are probably going to get this virus over the next 2-3 years, this would be a very good time to fix your blood sugar and blood pressure. It’s damn easy to fix (keto/fasting for HBA1C and weightlifting for blood pressure). 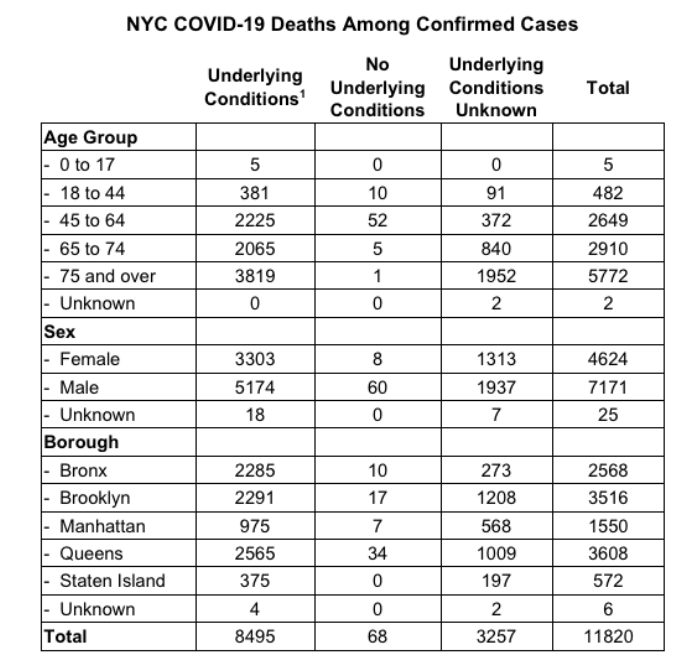 These charts show the growth of COVID-19 in New York City and State, as well as in NYC boroughs.

I’m behind in my reading, but just saw this, I am absolutely delighted!