Hey all! Been doing pretty well on keto, but I’m running into a wall. I need more options for delicious food. I can live on bacon but I need some help! Show me your best quick keto recipes!

We have an entire section on the forum here that has recipes =). There are tons of great recipes there.

Quick recipes pretty much require things to be ready to go when you get in the kitchen. For example, I just had a cheesewich, by layering:

Took less than 5 minutes to construct because all of the ingredients were available. I could have made it a Dagwood version by adding some corned beef, salami, and pastrami. And I could have had some (no sugar added) sweet gherkins or hot peppers on the side. I usually have bacon on it, but didn’t have any ready to go.

My quickest cheesewich is just two slices of Canadian bacon on a slice of pepper jack cheese. Just fold over and eat.

My pantry list is mostly geared around lazy microwave recipes.

Joseph’s Lavash Bread is one of my staples right now. I always cut the sheets into bread-sized squares right away. From there, there are so many possible uses for them. I’ve gotten to the point I can make cheese bread or pizza squares within five minutes. They’re like thin crust pizza and easy to pick up and eat. If I fold the cheese bread around something, like BBQ pulled pork or Canadian bacon, it’s like a hot pocket – gooey and meaty innards with a crispy flaky crust around it. 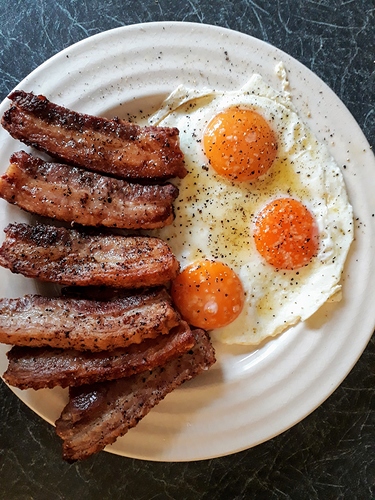 Brown some hamburger. Or maybe some Italian sausage. Or both. Stir in your favorite marinara or pizza sauce. Top with a goodly amount of shredded cheese and anything you’d normally put on a pizza. Pop it in the oven for a few minutes so the cheese and toppings get all melty and delicious.

Chop up several slices of bacon. Brown in a skillet. Brown some ground beef or sliced chicken in the same skillet. Dump in your favorite keto Alfredo or cheddar sauce (lots of easy recipes online) and some fresh or frozen broccoli that’s been cooked until crisp-tender.

(We have an insane amount of hamburger from the last quarter side of beef we bought. I’ve been getting terribly creative about using it up.)

chaffles. chaffle BLTs…chaffle pizza…chaffle churros. Air fryer brats or sausages, cheese and charcuterie w/ olives and cornichons. Steak (apx. 7 minutes for rare) and some steamed veggies. Burgers. Pork chops. Shirataki noodles (with oat fiber) in a olive oil, parmesan garlic sauce. Pepperoni crisps.
What do you want to eat? Keto can be as simple or as complicated as you want to make it.