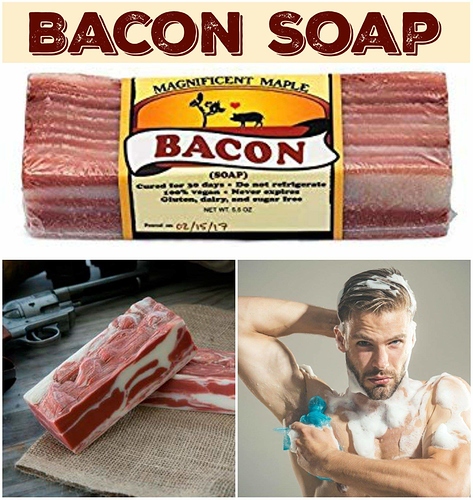 Oh my goodnesssssss!! No…just no… but it is funny. This would have been good to put on our Humour thread on here… =).

What! 100% VEGAN! Get a rope! I am actually thinking about making soap from the crap tons of Bacon Grease that accumulates faster than I can drink it…it will accentuate my natural manly KETO scent!

As a teen I used to always buy my dad a Soap on a Rope for Father’s Day, for his birthday, and for Christmas. I wonder if they even make them anymore. It seems that a lot of people use the body wash now.

Yeah, I was talking about a rope to hang whoever thought it was a good idea to make 100% vegan soap that looks like Slab Bacon. Facon is bad enough without further insults to our friend, the swine.

Hehehe =). I just thought about soap-on-a-rope with you mentioning a rope was all =).

It works on two levels!

Wouldn’t mind lathering up in non-vegan bacon though. And how about bacon perfume too? ‘Scent of bacon’…

They make candles out of bacon fat, so if you used them you would get the scent. I don’t like the smell personally, but I am one of the rare Keto people that doesn’t like bacon, hehe.

Don’t be a basher of the rasher!

Soap made from rendered bacon fat, anyone?

I am so old I can actually remember my parents making soap from rendered animal fat using lye somehow!

Lye saponifies the fat. Apparently, the harshness of lye soap results from using animal fat; plant fats are much gentler on the skin. Animal fat soap was all that was known until the late Middle Ages or early Renaissance (I forget exactly), when Castile soap, made from olive oil, was invented. That was the first plant-based soap, and others eventually followed.

So “vegan” describes most of the soap on the market today. Of course, most shampoos, body washes, dishwashing detergents, laundry detergents, etc., are made from synthetic detergents (including even some bar “soaps”).

Speaking of tallow, in searching for cheaper but old school soaps, Lava’s first ingredient is Sodium Tallowate. At $1 per bar, it sure beats the froo-froo but gigantic Buff City soap bars.

But if you must have a vegan alternative, I can attest that Kirk’s doesn’t dry you out.

But both have ‘fragrance’ so if you have a dirty GST/GPX gene, it may irritate you. 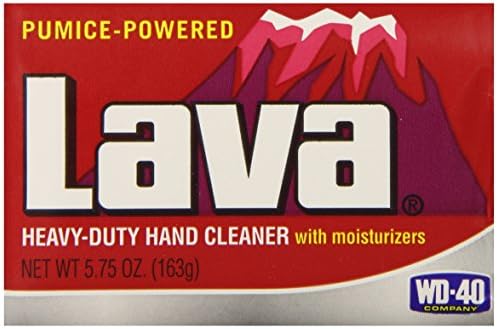 @PaulL I don’t think you are quite correct on this, harsh soap is the result of incomplete saponification, caused by too high a ratio of lye to fat. The excess is unable to react and causes the soap to have lye content and be crumbly. My girlfriend is a soap maker, and told me this a while back. The same thing can happen with Castile soap if your ratio is off. Liquid fat soaps take 2-5 years to harden like hard fat based soap, which is ready with a 2 month curing time. Otherwise they turn into mush pretty fast and result in lots of soap residue. Animal fats are still used in inexpensive soaps due to the lesser curing time and the lower cost of recycled fryer fats collected by tallow recycling businesses. They are mostly used in cosmetics including lip stick! Yuck! Rancid deodorized and colored fat on the lips!

Choosing the Best Type of Bar Soap for Your Skin

Admittedly, it was just from random reading on the Internet, in particular the How It’s Made site and a couple of industrial soap-makers’ sites, so it could be just a case of all the sites quoting inaccurate information that they got from one another, but the information was pretty consistently what I reported, so I took it for accurate. Apologies for getting it wrong.

…oh I wish you were in the UK, I would drive miles to collect your unwanted bacon grease…