I’ve been on the KETO & IF wagon going on 4 years and even converted my doctor. I’m well read on the subjects and own, studied and applied about every book printed on the subjects.

That said, I too have seen the physiological/adaptive glucose sparing creature coming into play the past 6 months. My normal fasting G range can be anywhere from 75 to 110 depending on basically my cheat level on carbs but ketone readings always stay in the .5-2.5 rangs, again depending on my activity level and energy intake.

My next physical (Jan or Feb '22)I plan on getting the HOMA-IR score to verify my insulin levels are in fact low as I expect they will be and ratio is good, just for my own peace of mind.

That said, suppose everything checks out and my HOMA-IR and fasting insulin levels are in fact low and I just am seeing the adaptive glucose sparing phenomenon playing out…is or could the excess blood sugar possibly causing harm?

My firm conviction is that the issue is the higher insulin levels that most people have and resulting disease so common today is a result of high insulin levels. But even as AGS is now considered “normal” for those of us longer term KETO/Fasters I can find absolutely no info on the possible ramifications of this higher blood sugar even with low insulin and no insulin resistance issue.

I’m not looking for opinions but links to solid scientific data to explain the AGS and the higher fasting blood sugars longer term and it’s effects.

There is a good post, from several years ago now, on the Hyperlipid blog by Petro Dobromylskiyj (Peter), on this topic.

You need to get calories from somewhere, should it be from carbohydrate or fat?

We do know that glucose and insulin levels are supposed to rise and fall, but within a fairly narrow range. Dr. Paul Mason, the Australian physician, has stated lately in a couple of recent video lectures, that he has stopped worrying so much about his patients’ actual serum glucose levels, so long as they remain stable, without spikes. Apparently, some people seem to run at a higher level, but as long as the fluctuations remain within a certain range, there is nothing to worry about.

I assume the same is true of insulin, as well. We know that the insulin response to a meal is intended to drive a certain amount of fat into adipose tissue, and then, as the insulin dies back down, that fat is released slowly between meals to keep a steady supply of energy available. I think that if we had continuous insulin monitors, we’d have a much better picture of how this is supposed to work. I also think we haven’t learned all there is to know about the interplay between insulin and glucagon, which I am sure is relevant to your thinking.

One thing we know, which may be relevant to the questions you pose, is that there have been experiments in mice, showing that when their pancreases are producing neither insulin nor glucagon, the mice never become diabetic (as diagnosed by elevated serum glucose). It is only when they can still produce glucagon, but not insulin, that diabetes becomes an issue. So there appear to be other regulatory mechanisms at play, in addition to these hormones. Now, how healthy these mice might be in other respects is still an open question, but this information does leave one to ponder. I suspect that the proper conclusion to draw is not that we should all remove our pancreases, but that we should trust that the bodily mechanisms at work are functioning as “designed,” so long as we don’t tamper with the machinery by imposing the wrong kind of fuel on it.

Thanks Paul. The article is a good one. I am still wondering though if all that higher sugar is harmful in and of itself. My guess is NO. The real enemy and damage to some extent is done by excess insulin.

But that’s what I’m looking for is if anyone has written on the effect of high blood glucose in the absence of high insulin specifically. Thanks again

Hyperglycaemia can indeed be damaging, over time, just as hyperinsulinaemia can be. But I think Peter’s point is that the higher serum glucose from adaptative glucose sparing is not harmful, so long as HbA1C remains low.

Glycation of the haemoglobin is one of the worst forms of damage that hyperglycaemia does, and Ravnskov and Diamond have posited that this damage, by making the blood readier to clot, is at the root of much cardiovascular disease. However, we also know that excessive glucose harms the mitochondria (again, through advanced glycation end-products) and causes other oxidative damage.

The excessive insulin needed to deal with excessive glucose also causes damage of its own, by (among other things) deactivating the body’s endogenous defenses against oxidation (hence the heightened need for vitamin C on a high-carbohydrate diet). Hyperinsulinaemia also interferes with the production of NO, needed to keep blood vessels relaxed, thus causing hypertension and contributing to other cardiovascular damage.

Typically, people look at the AUC (area under the curve) for things like insulin or glucose. Consider my glucose patterns over about 1.25 years: 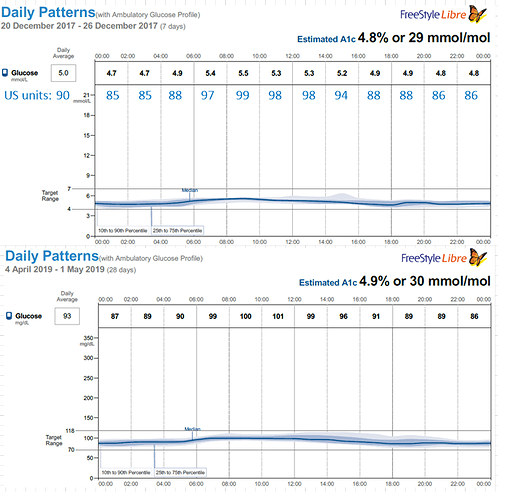 The actual AUC is low, because I don’t have any spikes of glucose. Or very few anyway. It’s pretty much flat: 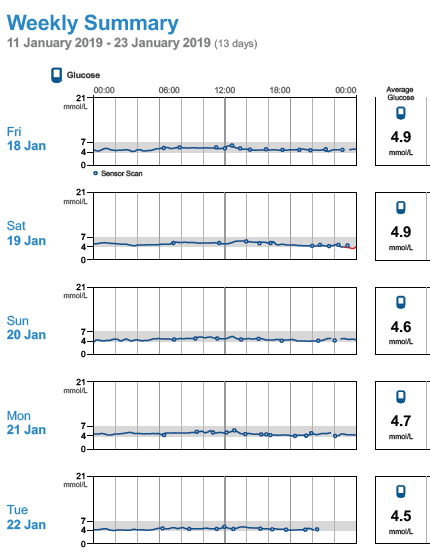 I have seen others recommend eating some carbs to lower your morning glucose. If you did that (and it actually did lower your glucose), would that be a good thing? I’m not sure.

This info helped me with another question I was going to ask someone about but didn’t get around to it. The Glucose Serum #s I’ve had since the beginning of Keto almost a year ago now. My HbA1c’s are very good, well into the safe range, but then I realized those other labs with the GS, were all marked as High.

I got worried about it, but reading your info @PaulL and thank you to @Junglepilot as well, for her question/post, I don’t think I’ll worry about those. Obviously, my MD isn’t concerned because he’s been praising me for getting my eating habits to align with lowering my blood sugars, no meds.

I have seen others recommend eating some carbs to lower your morning glucose.

But wouldn’t that happen only as the result of increasing insulin? That doesn’t sound like such a good idea to me. . . .

My HbA1c’s are very good, well into the safe range, but then I realized those other labs with the GS, were all marked as High.

A number of the keto experts (doctors and researchers) say that as long as HbA1C and inflammatory markers are low, then a higher serum glucose by itself is probably benign. And I believe that is probably especially true when pulse rate, blood pressure, and other cardiovascular numbers are normal, as well.

The HOMA-IR is a good way to address this also. The golden ration would be <1. But you have to get fasting insulin done at same time as your FBG test. I plan on doing that after the first of the year during next physical.

You have to do your own due diligence these days and there are so many reputable sources. (PS: I’m a dude

I don’t know. If you’re talking about someone with “really high” morning blood sugar, this could be caused by LMHRs, that is, lean keto people who are exercising a lot. They probably have low insulin anyway.

And without insulin meters, I’m not sure we have a good picture of what causes higher (overall, daily) insulin. For instance, in the last 9 years, I’ve had “regular” fasting insulin (about 12 hours fasting) ranging from 3.8 to 33. That’s about a 10x difference. Why? I have no idea.

You’d have to test insulin at least daily for a while and eat keto and test blood sugar. Then raise your carb intake to the point where your blood sugar went down and see what happens to insulin.

And maybe if you took carbs only before bed/at dinner, that would work?

Without an insulin meter, though, we’re just guessing.

And timing probably plays a huge role. For instance, I’m testing about 45g carbs from rice, the meal after body weight training of 1 hour 20 minutes. I usually eat that meal 2-3 hours after exercise. Would the blood sugar/insulin spike for that be different than, say, I ate the same thing at night on a day I did not exercise? I think these would be dramatically different, but don’t know.

Hey, thanks. I can almost guess my FBG in the AM depending on my eating habits. In fact Dr. Steven Phinney (Virta Health) says after a real heavy carb indulgence to expect 2-4 days for the liver to clear itself.

Yes, and the other cardio stuff is all good @PaulL so I’m just going with that

I might be a bit over-the-top with carb “fear” but since my diagnosis I don’t eat any “treats” and haven’t even tried, except 1 time at a potluck I tried some mashed potatos, a fruit salad, so little I thought sure it wouldn’t hurt me. My blood sugar spiked from that little amount, and yes there was a teenie bit of gravy too!!

Better safe than sorry. Our ancestors only had honey and occasional fruit. And that was in short supply. I lived in the Amazon Rainforest (as a pilot) and worked with indigenous tribes and often spent weekends out with them and ate what they ate. They have zero heart disease, diabetes, cancer. Not much sweet grows in the jungle. Mostly vegetarian with some fish and meat (that they catch or shoot).

Never met/talked to, anyone who was ever in the Amazon Rainforest, let alone worked with people that live there!! I guess that is definitely, not just in the movies

It sure doesn’t surprise me though, that they don’t have the diseases we have. So much of what we eat is just committing slow, suicide:worried: