What type of scales?

I’m looking into buying scales for tracking my weight as I go along my journey. I have previously had digital scales that were communicating with a phone app. Although I found them to be unreliable and the results to be all over the place. Due to my weight I have to buy larger scales than most, I have found the scales my doctor uses online and they are fairly reliable. Does anyone have an opinion on the best scales to use? Mechanical or digital?

My only opinion is to not use a scale. Go to your docs once a month and check it. The scale is a fickle fiend and can mess with your head. Or, maybe that’s just me.

But the scales will often show a gain or a stall…. while you just went down a size in pants.

I’m 100% with @robintemplin on this scale thing. Sure, you can weigh yourself and have lots of hourly data… but one’s weight fluctuates by several pounds throughout the day, so what is that actually telling you? Is it actionable data or useless reasons to get excited or disappointed?

Such precision you seek will tell you how much H2O you are retaining at any moment in time … again, what actions might you take as a result? Bones, muscle, and fat don’t change in weight materially from day to day.

From a different angle … One’s weight indicates how firmly the Earth is tugging on you through gravity. It doesn’t tell you anything about what’s going on inside you where health actually matters.

Skip the precision - it’s pointless. Keep track of your waistline. A sewing tape measure is cheaper, portable, and won’t need fresh batteries every other month.

Max, I think digital is the way to go. To an extent it’s probably ‘you get what you pay for,’ but we’ve got one that was only $30 U.S. or so. You give it a light tap to turn it on and it zeros itself. It’s been very consistent - with it’s own results and with a balance scale at one doctor’s office and a big, bad electronic one at another’s. 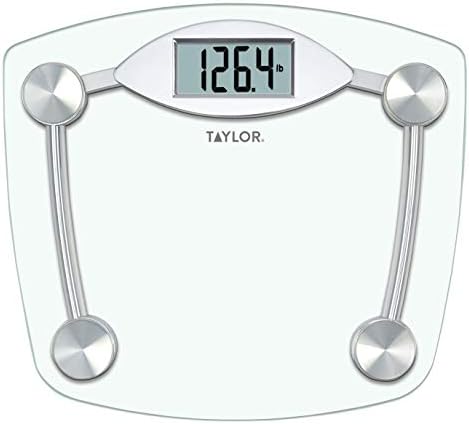 Just checked Amazon and it’s on sale for $27, and this is a decade or two after we bought ours.

I probably have a different perspective because of being an engineer for 40 years and a technician for some years before that, in a field where you can’t do anything without test instruments, electronics.

There are two things you’d like in any instrument: you’d like it to be accurate and you’d like it to be precise. A scale could be either one or neither and you want it to be both. There’s a pretty well-known graphic showing the difference between those two words that uses the analogy of shooting a target. What you really want is the one on the right.

Unfortunately, our bodies mess this up because our weight can vary quite a bit from day to day and hour to hour like what @robintemplin is talking about. This can be reduced by weighing yourself as closely as you can get to the same conditions every time. Same time of day, same body conditions, exact same clothing, and anything you can think of. Other than the occasional experiment, I weigh myself first thing in the morning after about 36 hours of fasting, the same day of the week. Chances are the room temperature matters, too.

After messing around with a few different scales, I settled on a bioimpedance digital scale that talks to my phone through Bluetooth, which sounds like what you said you used to have. It’s a Renpho CS20 and I’m pretty sure it’s this one:

I find that, while you can never get the equivalent of a perfect measurement where you put the first arrow in the dead center of the bullseye and you split that arrow with your next shot, the combination of the pretty accurate measurement with effort to measure under as close to exactly the same conditions as humanly possible.

Because of these things, I laugh when I see the commercials where the model says something like, “I lost 61 pounds!” Does that mean the scale said that one day and you claim it forever?

Brilliant. “One’s weight indicates how firmly the Earth is tugging on you through gravity.”

I probably have a different perspective because of being an engineer for 40 years and a technician for some years before that, in a field where you can’t do anything without test instruments, electronics.

I greatly appreciate your accuracy vs precision graphic (and use such visuals frequently to explain such distinctions). But the engineer in you may be running amok here

Gathering data for the sake of gathering data is not the highest use of our engineering savvy. If it ain’t actionable, what’s the point?

Information is not free - it always comes at a cost. In the case of closely tracking body weight (ignoring accuracy vs precision issues), it tends to be a source of great angst and misleading signals.

That angst and misdirection of signals is the “cost” of constant weighing for many folks. Engineers included

Hi @CFLBob as I work in an engineering company I share the need for testing but when an engineer tells me that this is a good product I believe them.

The measurements I do are roughly once or twice a month as I do share the opinion on @SomeGuy in that it’s not a reflection of health. But I also would like to know that a have an accurate weight as I need it for access equipment at work. As the health and safety officer I can’t be a hypocrite and use the wrong equipment.

But the engineer in you may be running amok here

Three engineers argue as to which kind of engineer is God…

Electrical engineer: “Clearly God was an EE … look at our amazing electrical neural network and all that incredible brain wiring”

Mechanical engineer: “Seriously? No, check out all of our levers and joints … clearly God was a brilliant ME!”

Civil engineer: “Both wrong … God was a civil engineer … who else would put a waste treatment plant smack in the middle of a community recreation center?”

I find like most things, in the beginning there’s a lot of emotion involved in a “success” or “failure” based on very few data points and so much hope, anticipation, joy or disappointment per weigh in. Over time though, as I get used to good days and ones that don’t get an attagirl, the attitude becomes more like ‘oh well, bet I’ll see something I like by week’s end’. I do appreciate a trend line, and it becomes easier to tell whether I’m drifting in the wrong direction, which informs my diet tweaks. If I don’t have data over time I tend to forget the journey and the progress, and I certainly don’t want the surprise of a gradual drift in the wrong direction that will take months to correct.

This said I do agree with the idea of overall health, and clothing fit, but I Am doing keto in part for appearance sake, and for me, weight, clothing fit and positive body image usually move together. I may not be that metabolically challenged, I feel like the content of my weight loss - fat, water etc - is relatively consistent. If I thought I was trading fat for muscle, I wouldn’t be that interested in scale changes, but I’m pretty sure that over time, the trend line’s showing fat loss.

Darn it! You are so correct!
I realize we do a lot of that on here. I will try to be more aware. Thanks for making the point clearly… and cleverly.

I find like most things, in the beginning there’s a lot of emotion involved in a “success” or “failure” based on very few data points and so much hope, anticipation, joy or disappointment per weigh in. Over time though, as I get used to good days and ones that don’t get an attagirl, the attitude becomes more like ‘oh well, bet I’ll see something I like by week’s end’. I do appreciate a trend line, and it becomes easier to tell whether I’m drifting in the wrong direction, which informs my diet tweaks. If I don’t have data over time I tend to forget the journey and the progress, and I certainly don’t want the surprise of a gradual drift in the wrong direction that will take months to correct.

Great wisdom in here, KM. The last time I was struggling to achieve a goal weight (which I never really got to) was November of '21. I gave up alternate day fasting assuming I’d put about five pounds back on just from not fasting half the time. I hit that five pounds by New Years of '22 - six weeks - but should have paid more attention to the trend line. It’s just that the trend was pretty much four ounces/week. The scale can only tell me to within +/-1.1 lbs and I’m looking for about 1/4 pound. It’s hard to know it’s really a trend until it has been one for six weeks.

I’m in the midst of an imposed 10 day experiment and I’ll be looking more closely by next weekend, maybe Monday the 30th.

I have an older model of the Tanita digital scale. I have found that it and my doctor’s scales agree, so I record info via notes, no phone connectivity, etc. I bought this when I was at my highest weight ever and measure myself most days but don’t let the number bug me unless I know I have strayed too far from keto/lc eating, it reminds me to get back on track. Since reaching my goal weight I have had periods where my weight did increase a few lbs.(10 lbs. max) but my clothes alf fit so I knew it was fine. I got rid of that gain from the pandemic era just before the New Year and life is good.

The most accurate is a properly-calibrated balance scale, but they are getting harder and harder to find. A spring scale (now being found even in doctors’ offices) is inherently less accurate. The problem with a balance scale is that they are bulky and heavy, which is no doubt why they are not so popular.

I have had trouble with a couple of digital scales, both of which seriously under-reported my weight. For some reason, they were much more accurate with my father’s weight. I now have a digital scale that seems pretty much on the mark, consistent with the weight shown on a balance scale I have access to. It also seems much less susceptible to giving different readings, depending on how I stand on it, and it pretty much gives the same weight, if I step on it more than once in a row, which is also nice.

Buy this one, don’t let the price fool you. It’s fast, accurate and consistent.

I’ve literally gone on scale buying sprees over the years, basic, “Smart Scales” (not a thing). Ones that connected to apps I already use, higher end BIA scales hoping they would be better than the typical ones that are completely useless, even ones for light commericial use. They all suck. This thing is basic, and does the job and quickly.

I wouldn’t go mechanical because they’re not accurate enough, even commercial balance scales need to constantly be tweaked to stay accurate where electronic ones can self calibrate and measure to the 10th.

Which one does your doc have? I’ve probably owned it, the priciest ones I’ve owned have been a consumer grade InBody, a Omron medical scale and a Tanita stand scale. The last two are pretty common with docs.