Been testing for a bit and have a question or two . A couple days I was curious about resukts and trying to process results . An example day went crazy on testing

Does this mean I’m burning fay or sometime I am and sometimes not . If part of day over .5 and other below what does that mean

Your ketone levels don’t correlate with fat loss speed, with few exceptions testing them is a a waste of time (and money).

Assuming you are talking about serum β-hydroxybutyrate, bear in mind that the definition of nutritional ketosis of 0.5 or above is somewhat arbitrary. The researchers who made it say that’s generally the point where they see the benefits of nutritional ketosis start to be visible. But they have also studied keto-adapted athletes whose ketones were down around 0.2 or 0.3, and those guys were clearly in ketosis, too.

You are likely to see lower ketone readings and higher glucose readings in the morning, then glucose tends to drop and ketones rise as the day progresses. But there are all sorts of factors that affect the readings. For example, your exercise pattern, or whether your exercises are at the explosive power or at the endurance end of the spectrum. (In other words, if you are running a marathon, ketones are likely to be higher; if doing clean and jerks, then glucose will be more needed.)

The researchers say that they don’t see a correlation between ketone level and fat burning. You need to have insulin low enough to produce ketones, in order to be metabolising fat at all, but past that point there is no added benefit to higher ketone levels. As Dr. Stephen Phinney said in a lecture, 1.0 might be a bit better than 0.5, but higher levels than that don’t seem to bring any additional benefit.

As long as your insulin stays below 25 μU/mL, your body will be metabolising primarily fatty acids and ketones, but above that level, the body switches to metabolising glucose instead. If you are fluctuating between the two states, that is not necessarily bad; it’s prolonged chronic hyperinsulinaemia and hyperglycaemia that are the states that do damage.

How do you know what ur insulin is . Thanks you made it very clear about the reading . Really appreciate all the info

the definition of nutritional ketosis of 0.5 or above is somewhat arbitrary.

Understatement of the century…!

That’s my starting point with anything that comes out of Phinney/Volek.

You go to a lab and get it tested, almost never necessary.

How do you know what ur insulin is .

The only way to know is by getting it tested at a laboratory. Efforts to create a home test have so far been unsuccessful.

That’s my starting point with anything that comes out of Phinney/Volek.

I would love to see some of the studies that you feel contradict their data.

Don’t need one, I was stupid enough for years to take their advice, read the Art and Science of Low Carb Living, Low Carb “Performance”, even their tweaks to Atkins with Westman prior to that. Know what it got me? Years of setbacks. Then I fell victim for Fungs nonsense, send “setbacks” into disasters. Then it hit me, everybody I was listening too, to get me to my goals was pretty clearly not doing it themselves. They were labrats that talked a good game, referenced a bunch of people in their studies that we never get to see, talked of their results we don’t get to put eyes on and it seemed everybody else I talked to in the low carb and keto world that was about performance seemed to agree.

There are two sides to the keto and low carb world, and I spent years on the wrong one. Maybe because as much as I’m about performance and strength, I also consider myself and anti-ager and longevity freak, but switching sides was the best thing I did for myself.

Can I ask what you did that was different?

Always good to get a different perspective.

I lost a lot of weight (120 pounds ish) on keto/carni with intermittent fasting and a few extended but have now started to regain.

I’m still down 90 pounds but seem less able to stop gaining (ok diet may have slipped a little but still usually always in ketosis).

Can I ask what you did that was different?

Sadly, it was a near complete overhaul. The starting point of me rethinking everything was being fat (again), unable to lose it seemingly no matter what I did, convinced myself that my stall/plateau (not even close, it was almost a year at my breaking point) was complete nonsense and that I was doing it to myself.

I started the standard issue keto’r. Didn’t think calories mattered, was all about fasting, thought it was great and just shy of magical, thought every problem in life began and ended with Insulin, though all carbs were equally evil blah blah blah, believed Jason Fung that it wouldn’t destroy my metabolic rate or make me lose muscle (it did both of those very efficiently). So I changed.

Started tracking calories, worked for a few weeks, than stopped. This was after months of all types of fasting, had my RMR measured and it came back around 1700/cals, which for an active person with a physical job and that worked out, is beyond pathetic. So I dropped down to 1500, and huge surprise, I started losing again. First time in almost a year the scale was slowly trending down. Problem was, the calorie trap. I had to keep going down thanks to all the damage, had to reverse diet for almost 1.5yrs to get my metabolic rate back up while also changing back to high protein and starting to get my muscle back that I lost. Which also plateau’d. Then came TKD and having carbs around my workouts, gym workouts transformed overnight and the muscle started coming back, which meant more metabolic repair. Long story short, caring about Calories, cranking up the protein, adding in carbs around workouts, no more fasting and now that 1700/cals a day is almost 3500. Now a slight drop and I’ll lose again vs the starvation it took before.

I started (again) around 260’s I believe with my bodyfat in the 30’s, I’m 5’10", I’m currently 5’10" at 220lbs at 13%BF and slowing gaining (intentionally) for now to put some more muscle on during the cold season and then to cut down as the warm weather comes back. Still eat great, still care about blood sugar, still want a low A1C, still don’t eat industrial waste like seed oils, still mostly eat keto, but with carbs around my workouts, good ones, not junk. Took a handful of tweaks but years of sliding were reversed pretty quickly once I changed.

A handful of others here have also dumped the high protein fears, the crazy amounts of fats being added for no reason at all, and seeing that cookie cutter keto really doesn’t work for the masses, the starting point I agree with, but once we start figuring ourselves out, we need to tweak for our needs/goals just like every other person does with their diet. We’re all different, what we eat should be too.

Many thanks for that.

Maybe also tighten up on the “treats” that haven’t been helping.

Treats will get you every time, but track, if you have the room for them, they should be fine. I wouldn’t blindly cut dairy unless you’ve actually identified that you have an issue with it. Too many are quick to blame dairy, cover all your other bases before you restrict.

Your amounts seem reasonable, given the variability in measurement and morning effect (causes higher blood sugar, lower ketones for me).

I still haven’t wrapped my head around this. They put 3 continuous ketone monitors on a person and got this graph over 14 days: 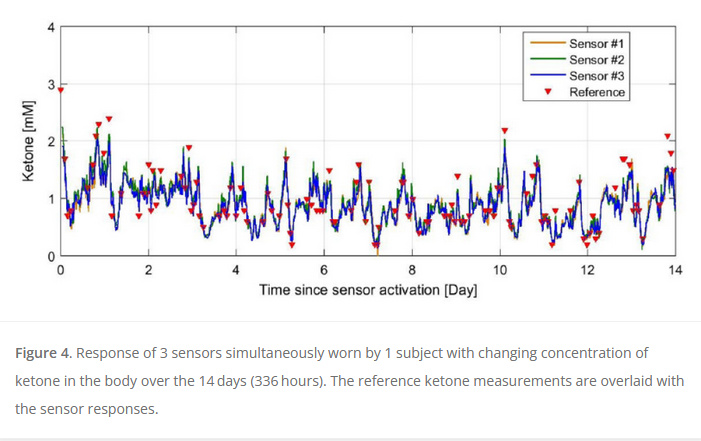 I have no idea what this person was eating, but if this is happening in all of us, it puts testing ketones into more perspective. There’s not even a daily pattern.

We should probably post this graph in every thread where someone complains of not showing ketones. They’re probably testing at the wrong time!

That is true. I think they tested 11 other people, but this is the only graph they showed. I know in my own simple blood testing that I couldn’t find many patterns at all, other than I usually had higher ketones at night and lower in the morning. But even that is suspect, if that graph is true.

I started retesting to see what happens when I eat some carbs the meal after body weight training. I’d like to know if I get “kicked out” of ketosis. Unfortunately, the highest ketone reading I’ve gotten so far is 0.2 mmol/l. I didn’t trust the meters I have, so I used some standard solution and got 1.1 mmol/l. Now, the solution said to toss it 90 days after opening…which was over 2 years ago. But I just wanted to see if the meter would measure higher.

I got 0.2 mmol/l last night, forgot to check this morning. Ate a few carbs after my body weight workout. Hope I can remember to test again tonight to see if anything’s different. I’m expecting not, but we’ll see. (My theory is that I’ve been in ketosis so long my body doesn’t like being out of it, and I did a lot of body weight exercises, so my body will basically ignore the carb hit. I’ll still be in a low mmol/l of BHB. Too bad I don’t have a CGM. That would be helpful too.)

They put 3 continuous ketone monitors on a person