In addition to stretching after exercise and foam rolling, my trainer said to add 15-30 minutes of medium-intensity cardio. Something about burning off the excess lactic acid.

As others have said, it depends on what kind of pain it is

Eventually, you won’t be sore. And weirdly, you will misS the soreness after working out.

The weird thing is that nobody really understands DOMS. You are still doing the same amount of damage and repair to your muscles, it’s just that your body stops signalling. 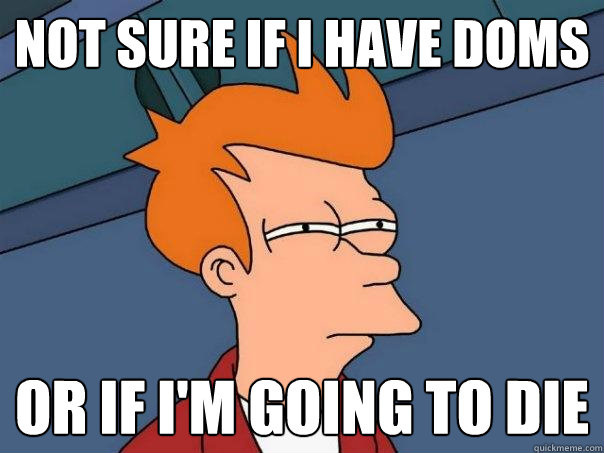 Also, 5x5 is bad for Doms initially, because of the three squat sessions each week. You will wonder how anyone can manage to do it. Eventually though, you will wonder what you ever worried about

Ive had bcaa kick me out of ketosis

The whole No Pain, No Gain crap from the 70s gyms needs to end.

Yaaaay! I just cracked my own DOMS code after two long months of inexplicable pain.

I’ve been an athlete and super physical person all my life, I know what my limits are, so it’s been annoying as fuck to wake up to horrible flu-level aches after the briefest of hikes. I was even getting aches in muscles I’ve never had aches in before, like my lats. How the fuck do you walk over level ground for a few miles and blow out a lat? In fact, I’ve been doing that same damned beginner hike since fall with pain every single time and zero muscle growth. That just makes no sense. My weight loss stall fits neatly into this period, too. Duh.

I was fearful of getting too much protein and knocking myself out of ketosis, so I kept it low. (Atkins didn’t work for me back in the 90s due to excessive protein so I’m probably the only athlete in here with a protein phobia.) Well, I just tripled my daily amount of delicious meat and guess what? No more DOMS. I love you, pork roast, I’ll never doubt you again.

Can’t wait to get back to that trail.

Hit upon a very important point and thats the protein phobic attitude some people get.

The problem is of course no one really knows what their lean body weight is and according to different people the range of how much protein you should have varies a great deal. Unlike the 50g limit of carbs for Ketosis, protein is very individual and is very dependent on how active you are.

I found a sweet spot I think of between 110-130g a day of protein and more on a n exercise day, but thats just me.

Soreness is inflammation and once fully fat adapted you get this reduced a lot more, it may be a sign if 4-6 months have thinking you are keto and fat adapted you may not be. if it really worries people then testing though blood or breath is the only way.

in fact if you follow the Maffetone method then the more pain the worse the performance. Yes HIIT has it’s place for short time but for the vast majority of us (not pro’s but see keen amateurs) pain is there to tell us something is wrong !

Soreness is inflammation and once fully fat adapted you get this reduced a lot more, it may be a sign if 4-6 months have thinking you are keto and fat adapted you may not be. if it really worries people then testing though blood or breath is the only way.

Oh, I was very definitely in ketosis, just not getting enough protein. Like you said, it’ll take some individual tweaking to find the sweet spot and to that end, the electronic food scale is comin’ out today.

pain is there to tell us something is wrong !

That’s my credo, too.

I have absolute zero muscle soreness after exercise (including weight training), this has never happened to me before. Yesterday I was walking home from my parents house and came across an oBike and decided to ride it home–the ride forces me up some very steep hills–usually if I attempt this ride i’m in a world of pain the next day. Today nothing. Earlier this week my father and I were moving furniture in the house to make it wheelchair friendly as my mother who has broken her foot. The next day I felt no muscles soreness whatsoever. What is going on here, can someone point to the relevant science?

using the treadmill is the worst! just ask my knees!

Stretching has awesome impact on muscles, if its done correctly and in time. You can try a lot of stretching exercises for keeping your muscles healthy. I think it adds flexibility in muscle fibers, and improves blood flow.