Hypolipidemia is associated with the severity of COVID-19

Collectively, our data demonstrate that the development of hypolipidemia can start in patients with mild symptoms. The degree of hypolipidemia positively correlates with the disease severity. 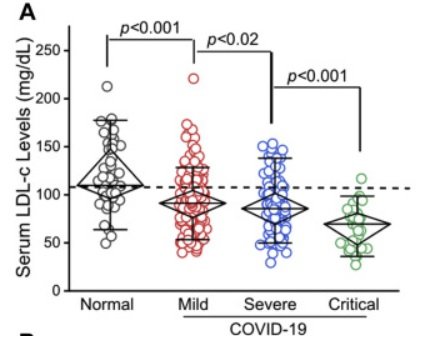 Why do you want to lower your cholesterol?

My doctor wants to lower my cholesterol. Next time she pushes a statin prescription I can suggest it would be more effective and maybe safer to get a massive dose of Covid-19.

Was this supposed to be in the " Humor " forum?

But I posted a link to a dead serious science article.

On serious notes, i would like to know some more:

The linked science paper also found HDL dropped significantly in those who became critically ill but wasn’t much effected in milder cases. The authors suggest Covid-19 is lowering cholesterol and here are some of the mechanisms they speculate are likely factors:

Inflammation caused by viral infection may result in dyslipidemia in patients. For example, patients with HIV have altered lipid profiles, such as a decrease in HDL-c and an increase in LDL-c levels17,18; patients infected with dengue virus ma﻿y show a decrease in serum LDL-c levels19; and hepatitis B patients in the cirrhosis phase have lower levels of HDL-c and LDL-c.20 In this study, we found decreased levels of LDL-c in patients. There are several possible explanations for this dyslipidemia. First, SARS-COV-2 may damage liver function and thereby reduce LDL-c biosynthesis. Serum levels of ALT, AST, and ALP increased moderately in about half of all patients, indicating mild liver-function damage. Therefore, changes in liver function are most likely not the major contributor to the reduced LDL-c levels. Second, acute inflammation induced by SARS-COV-2 alters lipid metabolism. It has been reported that proinflammatory cytokines such as TNF-α, IL-6, and IL-1β modulate lipid metabolism by altering liver function and diminishing cholesterol efflux and transport.21 We found that IL-6 was dramatically elevated in 96% of all patients. This strongly suggests that proinflammatory cytokines such as IL-6 are a major contributor to the lipid abnormality in patients. Third, lipids are highly vulnerable to degradation by free radicals, whose levels are generally elevated in host cells with a viral infection.22 A measurement of oxidized LDL-c in patient’s serum will be needed to determine this possibility. Fourth, SARS-COV-2 infection may alter vascular permeability, causing a leakage of cholesterol molecules into tissues, such as alveolar spaces, to form exudate. For example, exudates are observed in the early phase of COVID-19 lung pathology.23 Intra-alveolar exudates have been found in lung autopsies from SARS patients as well as in cynomolgus macaques infected with SARS-COV.24, 25, 26 Exudative fluids, containing high levels of protein (>2.9 g/dL) and cholesterol (>45 mg/dL), are caused by inflammation-related vascular permeability.27,28 Therefore, one possible mechanism underlying our data is that during the disease progression, severer inflammation and worse vascular permeability are, more plasma cholesterol and lipids leak into alveolar space, and less LDL-c and cholesterol remain in the plasma. We also posit that the dyslipidemia plays an important role in pathological development of COVID-19, which mechanism needs an urgent investigation.

Here’s an article which discusses some mechanisms by which infections impact cholesterol: 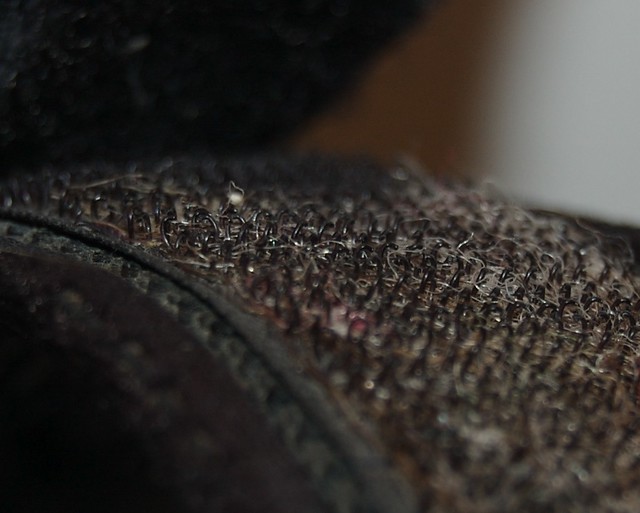 A Quick Recap In our last post about lipids and the immune system, we focused about how lipoproteins, particularly LDL, can participate in immune responses directly during infection – both by…

I read somewhere (isn’t that always the case?) that a covid infection migh be using the body’s cholesterol for its intended purpose: as part of the body’s immune system. So, cholesterol goes down because it’s being used to try and heal a sick body.

Then we got people on statins, effectively removing a big portion of the immune system, and we wonder why they end up on vents.