In the Twitter-sphere, I keep seeing people treating “keto” as if you HAVE to eat lower than 20 grams of carbs per day or if you’re not eating 75-80% fat, it’s not “keto”.

I typically eat nowhere near 80% fat, though some days I might. I usually like leaner meats instead of fattier. Though yesterday I had quite fatty beef and today fatty lamb, and have taken a liking lately to sour cream. I go through phases now: some days lean, other days fattier. But to me:

Especially since I started out with BHB 1+ and breath ketones 50-70 with no issues, and now (4+ years later, total of 7 years), I’m rarely above BHB of 1.0 mmol/l and only when I fast or eat a lot, and breath ketones never get above 50.

What’s a viable alternative? Keto is short for ‘ketosis’ or ‘nutritional ketosis’ which is a distinct metabolic state, characterized by the synthesis of ketones from the metabolism of fatty acids. It’s only possible in the absence (or great reduction) of dietary carbs and a concomitant reduction in insulin. 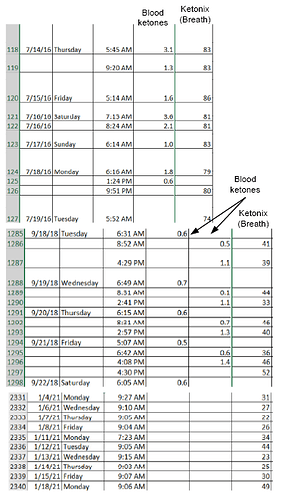 And I can show BHB consistently around 0.2-0.3 for morning values (afternoon values higher).

Was in a Twitter conversation where someone said keto was 80+ % fat; anything else was “low carb”.

I think we should rethink how we characterize this. I mean, if I’ve been doing this for 7 years, and am rarely in “ketosis” by BHB, maybe things should be rethought?

Oh yeah, and we say “when insulin is low”, what does this mean? My last fasting insulin was 9.6. Is that low?

No matter what is the name, people will keep these things… I let them. To me, keto is where I am in ketosis (so I like the name… oh when I did paleo… that name caused problems but that wasn’t my problem either), it is logical to me, it makes NO SENSE to me to consider keto only if we follow some strict rules that aren’t necessarily and maybe not even enough for ketosis…
But as I don’t measure anything and ketosis feels like not ketosis if I am not really low carb, I call my day “keto” if I am below the net carb limit I experienced as strict enough. Just like many people use 20g net/total even though they don’t know if they need it or if it’s enough for their individual case. But if someone eats up to 100g net carbs and stays in ketosis, I consider their diet keto (conditionally as I can’t possibly know if they are in ketosis. but if they are, it’s keto to me).
People love general fixed rules but our body just doesn’t work that way.

But we follow different styles of keto anyway… I am fine with using my own terminology but indeed, it can be problematic in understanding each other if we call wildly different things “keto”. If I see someone saying they eat keto, I suspect the one in question probably eat right to be in ketosis about all the time and probably eat little carbs (or they are delusional, it has a chance)… I can’t know anything about their food items as keto doesn’t ban anything and there isn’t any item that is required. That’s one thing not mentioned but people do: they consider certain items forbidden on keto (and probably many people think some items can’t be avoided). But if we just want ketosis, we don’t need to avoid carby items. It’s often a very good idea but being super strict is unnecessarily hard for many of us. I had enough of that in my one month paleo, I enjoyed I can eat almost anything on keto when I started (I already didn’t want to eat a lot of things being a health-conscious low-carber though).

So it’s clear enough to me, keto - ketosis.

Low-carb is way more vague, I never know what to think when I hear that. If I say that, I think of my old woe below 80g net carbs. If I hear from a doctor or someone with diabetes, it’s 150-160g carbs (or less but they love to use it as it’s often considered low and hard… as many people are used to even more). And some people call their keto or “mostly keto” simply low-carb.
I am a low-carber for sure but it’s not very informative.

By the way, I eat 60-70% fat but below 60 (while very rare) is quite possible, I had that a few days ago. 73-75% is tricky and above that? Nope if I have any choice. Sometimes I wonder about the people who unnecessarily force themselves into some too fatty woe their body feels bad on just because they have read it is a must for keto. No, it isn’t.

Carnivore is keto to me, I am simple but if I am wrong, sorry, fortunately I don’t care if it’s about my woe, I try to follow what feels right, it’s not about keto but health and well-being. But I am aware it’s separated for others and actually, for me too. My carnivore-ish is keto but I call my woe “keto” when it’s farther from carnivore and “carnivore-ish” when it’s super close or actually is carnivore.

I couldn’t do it more concise, sorry.

TL;DR: Keto seems a good name for me as ketosis is the point and people manage to use the same name for more or less different things anyway, it’s inevitable. I don’t think I know a single sustainable woe where the name means similar things for everyone… But many people judge like it would mean the same thing: what they themselves think about it.

@ctviggen Bob, my guess would be that after years of keto your synthesis of ketones syncs closely with your requirements, hence, not much excess floating around or being vented to measure. “When insulin is low” enough not to stop ketosis. Percentage of fat consumed is irrelevant. Beginning on day 2 of a water fast you’re in ketosis and have not eaten a molecule of fat.

well I thought being on ‘the Keto Plan’ meant you followed a set rule of macros. That IS the plan. The ‘Keto Plan’ is follow this set of rules to be and stay in ketosis and gives guidelines on how to do just that.

just being on a ketogenic menu doesn’t mean you are doing ‘the Keto Plan’ right?

I am carnivore and I burn ketones but I am not always in ‘an active ketosis’ state but never burning glucose as fuel so I am ‘a keto person’ too right? but not eating ‘the Keto Plan’ tho…

low carb, keto, carnivore, ketovore, all names we can use to describe us but what ‘plan’ are you actively following and using its description guidelines and concepts would be how I ‘name my plan’ I follow I guess.

interesting on it all tho

When I started tweaking to the level I did I just started saying I did “low carb”. If people were asking for more specific reasons I may say LCHF or Keto.

Was in a Twitter conversation where someone said keto was 80+ % fat; anything else was “low carb”.

IQ over at Twitter isn’t that high, I proudly deleted my acct the other day

IQ over at Twitter isn’t that high, I proudly deleted my acct the other day

But how they decided on 80%??? I saw 75% zillion times, it’s common but 80? Only for therapeutic keto, not in general. That’s huge, it isn’t even enough protein for everyone when they don’t eat unnecessarily much. And it’s way too fatty for many of us I am sure. No matter how much fat I eat, my percentage isn’t that high. And it’s unneeded for ketosis and fat adaptation so…

I had even bigger problems with “10% carbs”, the numbers never seemed okay… It’s either too high carb for most or starvation for most. Not like 5% would be fine but better.

Percentages are usually silly, they have little to do with our needs (I think of protein here), ketosis doesn’t require them… But they are everywhere. People probably love macro percentages for some reason.

As a totally random reply to this topic, my friend has a dog named Keto

Keto seems to have morphed into a catch all word for any low carb WOE. The internet is full of people who live solely to try and catch you in a technicality. I think ultra low carb high fat is a more accurate representation for many of us though. Being in ketosis seems to matter far more to the people who are doing a fad diet than the people who look at it as a way of eating/life.

If asked I just said keto because most people have heard of it, if not being intimately familiar with the nuances. It’s easier than explaining my personal touch on it and usually ends the conversation anyway.

Keto is the best name.

Im always in ketosis, thou numbers are often low like Bob.

Low carb does not discribe my woe, zero carb suits it better, keto is always true.

As a totally random reply to this topic, my friend has a dog named Keto

Totally out of curiosity, Allie, does your friend eat Ketogenically?

The other term is “well-formulated ketogenic diet,” which Dr. Phinney uses all the time.

While I sympathise with people’s distress that others appear to be misusing the term “keto,” I don’t really see what we can do about it, besides trying to educate the public as best we can. @richard’s notion is that we here on these forums should be doing our best to provide an accurate source of information about the ketogenic diet, and I believe we are successfully doing that.

I know that some people, even on these forums, use the term “keto” for carb intake under 20 g/day, and reserve the term “LCHF” for ketogenic carb intakes above that, but to me, any diet that lowers insulin to the point where ketogenesis is occurring in the liver is a ketogenic diet, no matter what you call it. We, at least, are clear that Carl and Richard decided to recommend a 20 g/day limit because it works for getting almost everybody into ketosis, not because it is a number with magical keto properties.

Totally out of curiosity, Allie, does your friend eat Ketogenically?

No she doesn’t, had no idea it was even a thing when she named her dog.

but to me, any diet that lowers insulin to the point where ketogenesis is occurring in the liver is a ketogenic diet, no matter what you call it.

Hehe --that is actually funny --but Keto is a great name!!

I consider myself a Ketonian --even on the days when I am mostly carnivore or doing EF too --all Keto for me as long as I keep those carbs really low =).