I eat snow crab with my king salmon every night (4-6oz crab with 5-6 oz salmon) . Is it true that a lot of lean protein raises insulin level?

Proteins are insulinogenic to a varying degree depending on the amino acids contained therein. The non branched chain amino acids are also glucagonogenic often to a much higher degree than insulinogenic in the absence of carbs.
I would not consider 12 oz of seafood to be a concern for the majority of people.

Not only that, but Prof. Benjamin Bikman, an insulin researcher, says that in the absence of dietary carbohydrate, the insulin response to protein is balanced by a commensurate glucagon response, which keeps the insulin/glucagon ratio low and thus keeps the body in fat-burning mode. While other researchers believe that too much protein can halt ketogenesis, Prof. Bikman does not seem particularly concerned about that. He is more concerned about getting enough protein to maintain skeletal muscle mass.

I suspect that if we are not burdening our body with an excessive glucose load by overeating carbohydrrate, then the body’s response to our food intake will most likely be benign.

Not in any way that really matters, around 12oz total isn’t a lot of protein, you’re probably looking at 50-60g total. That’s like a decent sized steak. Raising Insulin isn’t a problem either way, insulin isn’t your enemy, nor is spiking it sometimes, it remaining chronically high is the problem, and if you’re eating right that’s not going to happen.

Not in any way that really matters, around 12oz total isn’t a lot of protein, you’re probably looking at 50-60g total.

Looks as though there’s an error there. Twelve ounces is a fair amount of meat and would represent around 84 g of protein. Or if you really meant twelve ounces of protein, that would come to around four pounds (1.8 kg) of meat.

It’s highly dependent on what meat and where you look. 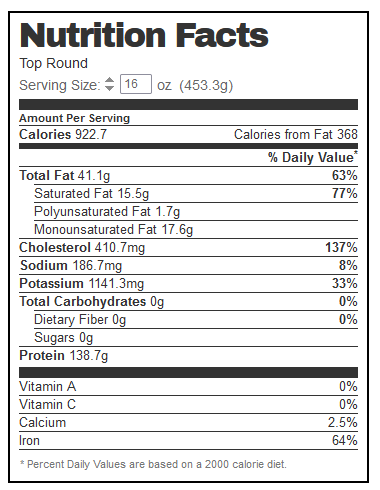 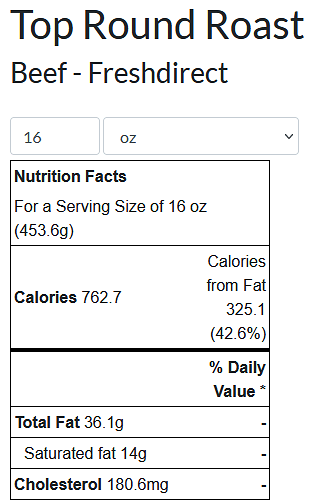 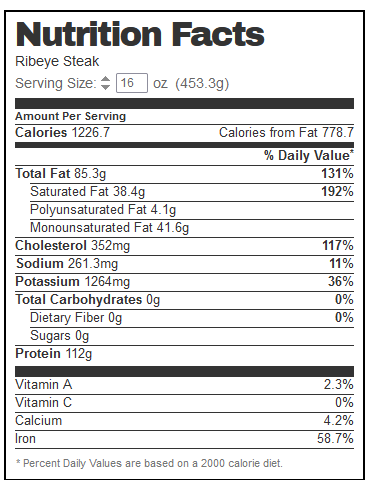 Oops…I did 16 ounces and not 12, but you can see the differences. Not to mention most of these assume you’re cutting fat off the top round (which, admittedly, does not have a lot of fat cap, but can have some).

Grabbed the first thing that came up in Cronometer

There may be a problem in Cronometer, then, because most of the meats I’ve checked in the USDA Food Composition Database are around 25% protein. Phinney says he uses 7 grams protein per ounce of meat as his rule of thumb.

I’m really having a hard time knowing just how much protein im consuming.

With the King salmon there seems to be anywhere from 30-40 per 6 oz according to the internet.

The snow crab doesn’t seem to vary as much. 5g protein per oz.’

I have no idea what my lean body mass is. I am 5’3 about 60 lbs. (yes I know that is extremely underweight, I have been through a lot physically and mentally and I do see doctors) I am petite boned, and was 110 lbs probably at my most. I wish I knew the magic number of how much protein to eat to gain weight and muscle and feel good. I eat almost 3 avocados a day and have added a lot of nuts but im still not gaining much weight.

The USDA food composition database says that raw King salmon is 20.2% protein by weight, so if I did the arithmetic correctly, that means that 6 oz. should contain 34.43 g of protein. The listing for snow crab says 23.8% protein, or 6.76 g/oz. So it seems that your sources are in the same range.

If you want to build muscle, then you need to eat plenty of protein, being sure to eat sources rich in the branched-chain amino acids, which are leucine, iso-leucine, and valine. Then you will need enough fat to fuel the exercise needed to build the muscles. A hundred grams of protein a day would certainly not be too much. So if you were going by the salmon figure above, 20% is 1/5 of the salmon by weight, so if you wanted 100 g of protein, you’d need to eat 5 x 100 = 500 g of salmon, which is between 17 and 18 oz.

and how much fat would you add to 100g protein?

How much fat? Enough to satisfy hunger. If you were eating 300 grams of carbohydrate before, that is 1200 calories you are no longer getting from carbohydrate. You can get those 1200 calories from 133.33 g of fat.