In ketosis, blood sugar goes down really slowly after a bit more carb

I’ve been eating less than 20g of net carbs for several months now.

When I started, my FBG was below 100 mg/dL. After a while, it was higher than 100. I’ve persisted and it finally was consistently below 100. By reading posts here and elsewhere on the web I’ve understood my body was somehow cleansing itself. I do mostly OMAD.

Now I’m on vacation and it’s been a little bit more difficult to stay below 20g. But I do try to be as strict as possible. I’m hiking, kayaking and cycling everyday. Sometimes I have more carbs than I’d normally have. For instance, yesterday I’ve had green beans (a lot, say 200g) and ratatouille (say, 200g). With poached fish.

But on other days like this, I’ve had FBG 101 the morning after.

I’m not eating ice creams and cakes. When I eat a bad meal, it’s veggies, like having green beans, or carrots, or tomatoes. My BG after such a bad meal doesn’t go above 150.

My question is about the BG going down so slowly after such a meal. My body doesn’t make insulin? Or it doesn’t react to it as a normal person?

As per ketostix, I’m in ketosis. I’ve been out of ketosis only one day (almost no color change), then the day after I had the second darkest color on the stick. The day before I’ve done an epic climb with my bike against 100 km/h wind gusts.

Thank you for any information about the BG going down so slowly after a bad meal.

Edit: I’ve never been diagnosed as diabetic, nor pre, but I had a FBG test give me a 102 once and that has motivated me to change my WOE. I haven’t seen my doctor since, because right after that test I travelled and when I was back, the coronavirus started. I’m 1,64m and about 61 kg and have never been obese.

I found you have to be careful with this analysis. For instance, are you “exercising” more? Even walking? I see you did a bike ride, which can cause your blood sugar to go UP not down.

I have found, for instance, that if I exercise in the morning then go housework (think walking up and down 2 flights of stairs, many times), my blood sugar will stay higher than 100 all day. It goes up for the workout and stays high. I think it’s the body’s way of getting glucose to those cells that need it and also to recover glycogen.

Would show CGM of this, but power is out at home, and my backup here at work is too difficult to do right now.

I’ve never been diagnosed as diabetic, nor pre, but I had a FBG test give me a 102 once and that has motivated me to change my WOE. I haven’t seen my doctor since, because right after that test I travelled and when I was back, the coronavirus started. I’m 1,64m and about 61 kg and have never been obese.

Have you had A1C tests? (Hemoglobin A1c or HbA1c). It looks like you’re really pretty metabolically healthy. A1C gives a longer term view of what’s happening with blood sugar, despite any short term ups and downs.

The highest blood sugar is caused by exercise and working on the house. (I don’t eat breakfast, but will eat usually around 10 am or so on the days I exercise.) 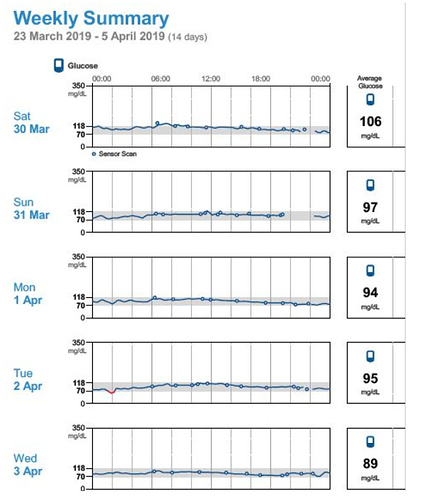 Depends what the ‘normal’ response to a glucose load (supplied by food) is for you. Presuming you ate SAD for many years prior to keto, you can expect some degree of insulin resistance. In the following I discuss my CGM experiment, which time-wise was 3 years into keto, after a lifetime (71 years) on SAD. In my daily glucose plots, I don’t think you can determine when I ate something or not. Even though I eat very low carb (sub-15 grams and frequently sub-10/sub-5) my glucose remains normal.

Another problem is glucose sparing in the morning. This is one month of data. I had been low carb/keto about 5 years at that time. 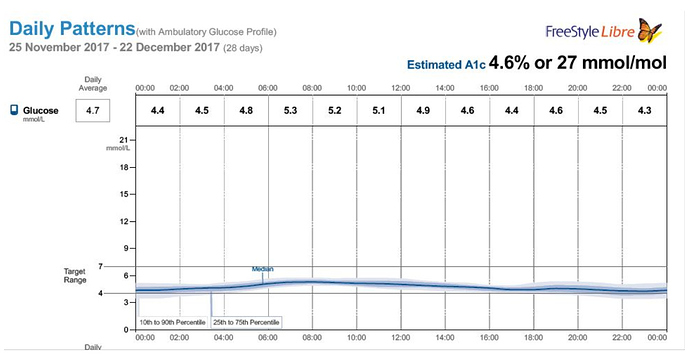 I have months of data that look just like this: higher in the morning (don’t eat bfast, just coffee/tea), goes up for a while, then goes down all day. Near morning is my highest blood sugar, at night is lowest.

Now, some of this is due to working out in the morning, which raises blood sugar. But on the days I don’t exercise, I get the same thing. I even get it while fasting multiple days (with no exercise), but the whole curve drops down. That is, I might start out at 90 instead of 100 after a day or two of fasting, but my evening blood sugar is much less than 90.

So, if someone says “I took my blood sugar [in the morning] and it was over 100!”, to me, it’s a meaningless statement.

It’s the curve over time that matters. And that time is a day, a week, a month.

And I’ve found I can eat things that would freak people out on this board, and my blood sugar either does not go up or goes down. Popcorn? No rise I could see. Salsa (usually, quite a bit)? No rise at all, might go down. Massive amounts of protein? No rise at all.

My only wish is that CGMs would (1) come down to about $25/month, (2) be less obtrusive, and (3) have more than 8 hours of data (ah, anyone heard of sleeping for 8 hours?) or allow instant local transfer to a phone (set your phone near your bed, get all the data).

Interesting. I’ve read so many times about exercising lowering BG. Because the body would use the G.

I’m exercising a lot, but I do that at home, too. More intense now, though.

I have never had it done. I’m planning to have it as soon as possible.

I have mixed feelings about it. It feels like I’m fine, as long as I don’t eat carbs. I’d consider myself metabolically healthy if I could eat half a potato and have my BG back to under 100 within, say, 2-3h, though. Not that I want to eat potatoes! It’s just that that would mean I’m insulin sensitive.

Thank you so much for sharing! Have you ever been diagnosed with diabetes? How did you do on a A1c?

The Dawn Phenomenon! It drove me crazy. I was so sad! Watching high FBG! My BG would go down after eating, as opposed to before! A couple of nuts and BG would go down. If I had nothing to eat, it would continue to go up. It really did drive me crazy.

But that seems to be over. I hope it doesn’t come back! Now I get morning readings below 100 mg/dL most days. It’s seldom above 100 and then it’s like 101. It could be just error (hopefully!). I’m talking about FBG.

After a keto meal, it doesn’t go much up.

The problem is when the meal isn’t keto.

I was never diagnosed, though I also never got an HbA1c until well into low carb: 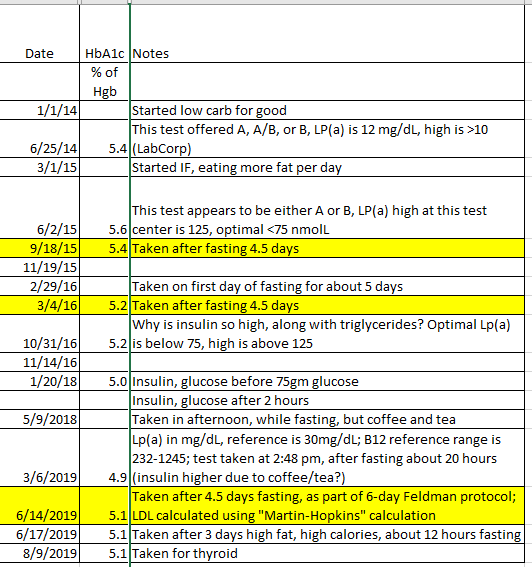 I did not get HbA1c tested for 6 months into low carb. Sadly, because doctors know little, I also did not get a fasting insulin done or a Kraft test done until well into low carb. I think if I had those done while on high carb, I would have failed.

Also, I did have morning glucose >100 while on high carb. On high carb, I think that’s an issue. On low carb, I do not think it is, since I’ve had hundreds of morning blood sugar readings above that.

Note that HbA1c is a gross measure, as it depends on multiple factors such as how long your red blood cells live. This means it can vary for two people who actually have the same exact average blood sugar.

Wow! So nice that you have all of this data! I’m curious to see my results for my next tests. I’ll ask insulin, but I’m not sure I’ll get it. Last time all seemed fine, except for the FBG slightly above 100 mg/dL. It was before keto.

I was reading this again and realized I don’t know why a reading above 100 wouldn’t be a problem if you’re eating low carb. I’m looking for references about it, or even if you don’t have references, just an explanation.

Is it that insulin production goes down, because our pancreas realizes we don’t need it so much anymore (eating less carbs, therefore less insulin needed)? Then the beta cells become a bit lazy? This would mean my beta cells are taking vacation and will/would eventually come back to work a lot more motivated, wouldn’t they? That’s why we need to go higher carb if going for a OGTT, right? To wake up our insulin production before the shock of ingesting 75g of carbs?

I’ve checked my averages BG and it’s below 100 for FBG, 110 for peak after meal (not only after 2h, but when I peak, usually 1h after meal, because I measure for both), 104 overall. Nowadays I’m measuring only 1h after meal.

There was a time (after about weeks/first month on keto) my FBG wouldn’t stop going up until I had something to eat and it seemed to be trending up.

The best way to sort this out would be an oral glucose tolerance test, which would measure both your glucose curve and your insulin curve over time. This test is labour-intensive and therefore expensive, so it doesn’t usually get ordered. However, if your HbA1C is in the healthy range, your glucose readings throughout the day are not that much of a concern.