If the ROCK was a vegan 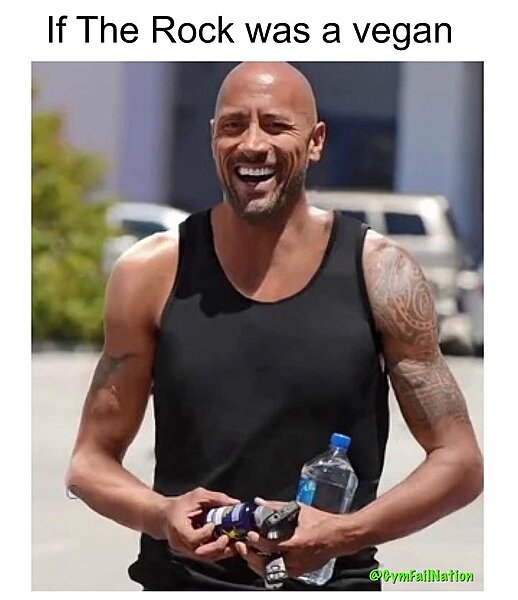 He wouldn’t be smiling either.

There are vegan strongmen, actually, why not? One can get any amount of calories and protein on a vegan diet, there are supplements… There isn’t a single essential nutrient one can get that way. It may or may not be really healthy for someone but being buff? That’s very possible.

B12? Guessing they supplement with at least that

Out of curiosity, where does one get B12 that is not ultimately animal-sourced?

Yeah, that’s necessary. Unless maybe for the ones whose gut flora makes it, it’s allegedly a thing just not common.

I’ve read absolutely no vegan source provides the B12 we need. I read it even on a vegan site once. It still doesn’t mean it’s surely true but I suppose so at this point.

There are vegan strongmen, actually

No, there aren’t. There are Vegans that (call) themselves strongmen, there’s a difference. Google up Vegan strongman and you’ll see none of them are any more impressive than half the guys lifting at any gym. Even that IFBB Pro that’s a Vegan isn’t even big as far as bodybuilding standards, descent physique for sure, but for a bodybuilder, or a Pro? Nope. His name is Nimai Delgado, I checked his stats, he’s 5’7" says he weights 145lbs, he looks good, but here’s the problem, I’m clocking in at around 230lbs right now, my last DEXA had me at 11% BF, he’s probably around 8% or so, but I’ve got almost 100lbs on him, quick math say I have more muscle on me than he does, he may look a little better because his BF% is lower, but I’m literally bigger than a IFBB “Pro” bodybuilder… HE should be ashamed. The ONLY reason that’s the case… is because he’s a Vegan. In no other reality can normal lifting me ever remotely compete with a pro.

For me, there’s no reality for arguing a diet that’s nutrient deficient by design, and that relies on inferior protein sources.

Most oral supplements, Injectables and IV’s are bioidentical synthetics.

There is a very strong one, it’s true he gained NOT at his current vegan diet though. I am not motivated enough to find out who he is and I forgot.

Whatever. One can get any essential nutrients from plants of supplements, it’s very well known. It’s super easy to consume tons of calories and protein on a plant-based diet too (if one can eat, at least). And being a pro bodybuilder inevitably requires tons of steroids anyway… Maybe a strongman has it easier, I am not familiar with that.

Not nutrient deficient if someone doesn’t do it like that. There is NO nutrients you can’t get from plants or a few supplements because B12 is special. Maybe some people has bodies that can’t absorb the stuff well, they shouldn’t go vegan. Or the ones who feels best on extreme low-carb.

It’s easier to argue regarding “meat is needed” as no one ever could tell me a single essential nutrient I couldn’t get from elsewhere, very easily. But I was just a healthy vegetarian one and not even strong (but I didn’t lack protein or calories at all). Veganism is trickier but lack of nutrients? Nope, not if one is healthy enough, eat well and can absorb things just right from food.

There is NO nutrients you can’t get from plants

Creatine, Carnosine, Vitamin D3 come to mind. There’s also the fact that plant based proteins aren’t as bioavailable as animal based ones, that’s not opinion, as humans we lack the amount of cellulose enzyme to break most of it down correctly. It takes a lot more plant based proteins to equal what animal protein does for you.

You’re making the argument that you can be a Veggie or a Vegan and be healthy, that’s not the argument. The discussion is Vegan bodybuilders/strongmen. Simply being “healthy” isn’t the goal, having massive strength and/or an impressive physique is. You hit the nail on the head with the unnamed person you mentioned, almost off of them did the hard work and built what they had prior to making the switch, it’s not hard to maintain what you already have regardless.

When Vegans and Vegetarians start walking across the stage at Olympia, or even compete in something other the Classic Physique level, then they get to say they do just as well as those eating meat, I’ve been following bodybuilding since I’ve been a kid, I’ve yet to ever see that happen. Pretty sure that’s not a coincidence.

And being a pro bodybuilder inevitably requires tons of steroids anyway… Maybe a strongman has it easier, I am not familiar with that.

All the steroids in the world can’t overcome a diet that’s not right! People give way too much credit to them, I say that as somebody with first hand experience. Steroids cheat the recovery and stamina, they don’t directly put the muscle on you, you still need to be in the gym earning it, and still need to have all the building blocks to actually create muscle mass.

There’s also the fact that plant based proteins aren’t as bioavailable as animal based ones, that’s not opinion,

Peter Ballerstedt has a lecture on this. Most of the “protein” listings on nutrition panels are actually what animal nutritionists call “crude” protein, and the number is based on the nitrogen contained in the food. But human beings cannot use nitrogen in food unless it is part of an amino acid, and for our diet, it is the useable protein that matters, which in plant foods may be quite a bit less than the “protein” amount listed on the label. Ruminants are a special case, because their intestinal bacteria turn all the indigestible parts of their diet into fatty acids, and those fatty acids are what feed the animal.

We are also limited by the least abundant amino acid in the food we eat. So if we get an abundance of all the other amino acids but not quite enough lysine, say, then all the extra amino acids go to waste. It appears that part of the reason for this is that the human body is not capable of storing more than a very limited quantity of amino acids.

Definitely, I left that one out since that was addressed, that’s one of their biggest shortfalls.

Ah yes I see now. Geez. Weird. Those prior posts referencing B12 didn’t show up on my screen for some reason. I see them now. Odd.

Very true. Content amount is one thing, bioavailability is another.

@lfod14 I kept wanting to chime in, but you keep NAILING the key points.
Thank you. We have to DESTROY This MYTH. There has NEVER been a Culture that was Vegan. The word didn’t exist until 1940s-1950s.

The proteins either come with too many carbs (beans) or too many fats (seeds).

The photo that started this is a key point. I joking play a game of “Meth or Vegan”
when showing pictures of LONG TERM Vegans.

Anyone interested should read “The Vegan Myth” by Lierre Keith. She DESTROYED her health, and her bones. Her recovery… A Carnivore Diet. Her bones were so messed up, every doctor asks her “was it a car accident?”… (FWIW, I think her response should be… No it was a “Train Wreck WOE called Veganism”)

Truth be told. The ONLY reason switching from SAD to Veganism helps… Is that IT CAN remove the many Junk Foods. (But Coke, and Oreos are Vegan). Almost ANY diet beats the SAD diet.

Vegan is a CLEANSE of sorts. Using it short term, sure. But John Venus admits he saw the health of his baby NEGATIVELY impacted. And as he dug into the research, he realized it was WEAK evidence held up by IDEALOGUES (true Believers who say if you have poor results, you are not doing it right).

My Favorite Story… The lady who created the Macrobiotic Diet… Died of Cancer!

Most of the Professional Athletes who have went Vegan are now Injured, or Retired.
Keep an eye on them. It’s usually career ending.

Thank you for chiming in… We have to have these HONEST Discourses, so people know…
The push to veganism is MAN-MADE. The WEF has announced that MEAT will be a luxury if they have anything to do with it. (And since they control ALL the money, news, media, and tech, you can rest assured they will try to see it happen… Having People like Bill Gates becoming the largest farm owner should scare you!)

HAHA, thats a funny joke, but I think if Scala was vegan, he would still be able to maintain his muscle mass

Hi Catherine. Welcome to the forum