How We're Perceived by Vegans and Vegetarians 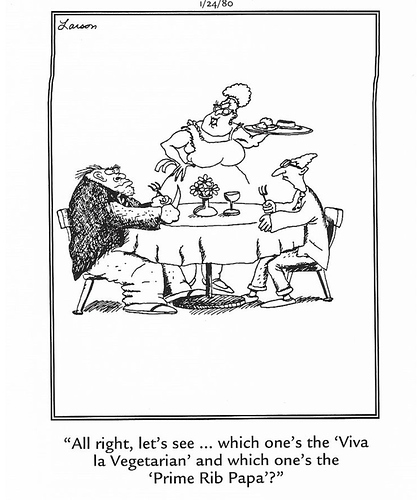 And the vegetarian ketoers feel a little bit funny I guess… 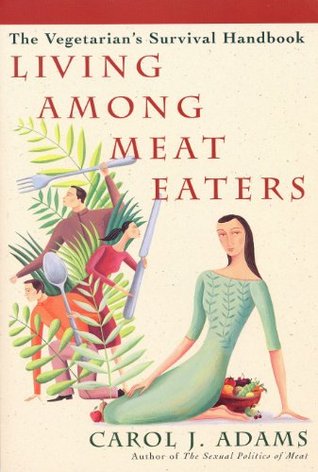 I’m going to guess the vegetarian is on the left.

And the vegetarian ketoers feel a little bit funny I guess…

As you would expect.

@David_Stilley There’s a serious disconnect with rational thought for many of these folks. They simply want to ignore more than 4 million years of hominid/human evolution. They seem to think that life began 10K years ago, the Pleistocene never happened and that all the wonderful fruits and veggies we have available now always existed. You can’t reason with unreasonable people. 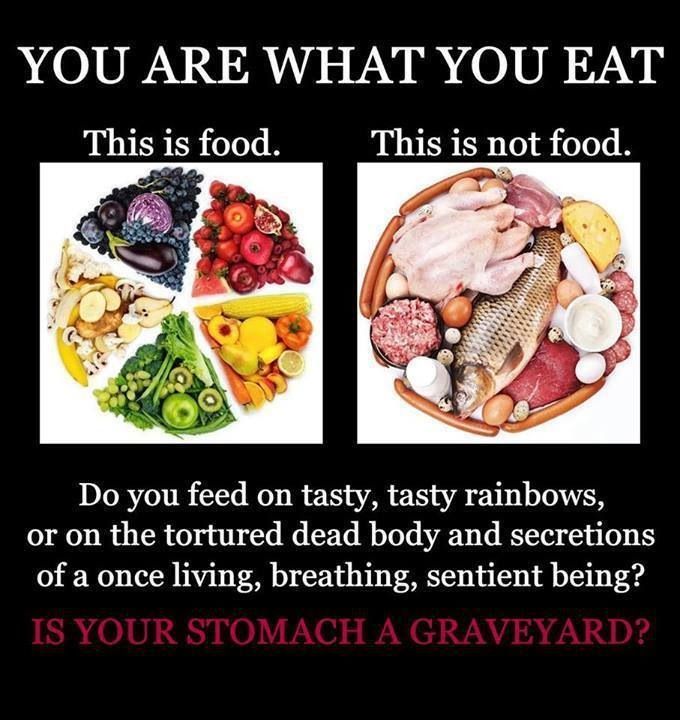 I couldn’t resist, again. I should sleep instead but it was fun.

Oh my. Yes, my stomach is a graveyard, so to speak, what else would it be? I am a too complicated animal so I need to eat… Living beings! (Not all are sentient but they are living and respiration is actually in the definition, it seems). Sometimes I eat them even ALIVE but it’s usually in the case of plants. If you eat sprouts, you commit MASS CHILD MURDER! I could eat a sheep in… weeks, at least? You eat multiple living beings in an hour or a minute! And the sheep I eat has lived on a nice nearby farm for a long time but your sprouts had no life at all! Only a few days or a week at most!

(Yes, yes, not sentient though I can imagine to start a passionate discussion about that with someone one day… Not because I think so, just for fun. But I can admit I don’t actually KNOW what a plant actually does and feels. I am no scientist, even. So I wouldn’t even lie, just describe interesting hypotheses. It’s too late, I didn’t think it through, sorry if it’s stupid. But it can be still used for some soft trolling…)

Tasty rainbows? I am no unicorn (though I have no idea what they eat, actually). But the right side is colorful too, isn’t it? It’s very nice. I actually can live without eating light green or turquoise things (that’s eggs with fried purple cabbage, the eggs becomes turquoise colored. It’s fun but not particularly beautiful if you ask me).
The colors on the left are pretty but that’s art, not necessarily food.

Apropos second pic, they could use some heavier picture with freshly butchered animals. But I guess the too fragile vegans couldn’t handle it and many meat eaters wouldn’t bat an eye… Torture is something else, I hate that too. I usually don’t hate the persons who eat “tortured dead bodies” and probably dislike the ones who hate the persons, those are quite rude to living, breathing, sentient beings and this rudeness might be torture. Our psyche can be very fragile but even anger and annoyance might ruin our digestion or something. And that’s physical harm too.

It’s just my first, tired thoughts, I could make it much better. Plants very often get tortured, poisoned and well, they often do the latter all by themselves, it’s no secret.
Secretion sounds just fine. I eat things called chicken periods by vegans without any bad feelings, secretion is so very not effective!

And if I am what I eat (though it’s not my belief at all, maybe I take things too literally)… I rather be a sentient animal (like I actually am) than a cucumber or a potato. But being an egg sounds very youthful and wholesome too. I am greedy, I want to be a dozen eggs, how about it?

Others may become a tasty rainbow just fine. I am nice and allow that

(I would become a tortured living body eating all/only that but we aren’t the same. They become tasty, tasty rainbows.)

There’s a serious disconnect with rational thought for many of these folks. They simply want to ignore more than 4 million years of hominid/human evolution.

I think you have to go back even further if you want to find ancestors that ate no animals at all (rodents, insects…).
It’s funny that there’s a big overlap between vegan and environmentalists, because it seems to me you need to have a major disconnect to believe that vegan diet is healthful for humans: it’s as if they think that we’re not actually part of nature.

I’m going to guess the vegetarian is on the left.

Have to admit I had to think about which was which for a bit. I think it’s a sign that my thinking has been ketoied.

There is a thread for/about who was previously vegan or vegetarian. I imagine that the insights to perceptions would be valuable.

I also feel the eyes of the lurkers scanning down this thread. The “we” in the “We’re” includes plant-based eaters that achieve nutritional ketosis. There are vegetarians here. Ketotarians who see no benefit in leaping through the pit trap aperture with flame thrower set to Armageddon.

For those of us neither vegetarian nor vegan our replies here are meagre speculation. There is some nipple twisting and hair pulling, but I don’t think any raging vegans are going to turn up.

After all the presenting argument was nary a question but an introduction to a cartoonist’s (the great Gary Larson) visually exaggerated perception from the mid-late 20th century.

I just needed to write something before closing off the computer to head home from work.

It’s funny that there’s a big overlap between vegan and environmentalists, because it seems to me you need to have a major disconnect to believe that vegan diet is healthful for humans: it’s as if they think that we’re not actually part of nature.

Ethics should be considered. However, there is a big difference between ethics and health, and that’s the point that they are missing. You can accept at the same time that industrial meat is detrimental to our environment and animal rights are not respected for most of our meat, and yet meat is the best food for us. Let’s face it, the optimal solution for the environment would be if humanity were gone, or reduced to a fraction of its size at least.

I happen to be a very compassionate person, and that includes animals. That doesn’t mean I can’t eat them, it means that I want them to have a happy life and a peaceful death. (The latter also because I don’t want to eat meat full of fear induced hormones and chemicals). We used to raise pigs, on an acre of land. They had a hutch we put a few bales of straw in. Out of this they lined the walls in straw and ended up building an igloo type thing, using the hutch as frame (the three little piggies in real life

) They played soccer and rolled tires and had a lot of fun. Then they got big, greedy and belligerent. One day the local butcher showed up and took them out with one shot, which they never saw coming. Hung in his truck. A good life, a peaceful death, and the best darn meat you ever tasted. Nothing like free range pork. Nothing.

Let’s face it, the optimal solution for the environment would be if humanity were gone, or reduced to a fraction of its size at least.

are you suggesting we eat the vegans and vegetarians?

LOL…just joking on it LOL

Davy puts some fun posts out on the forum

I guess I am the Caveman in that picture HA

Prime Rib Papa!!! for me tho…Prime Rib Mama! heck now I want a prime rib on my plate! ugh, you got me hungry typing this! 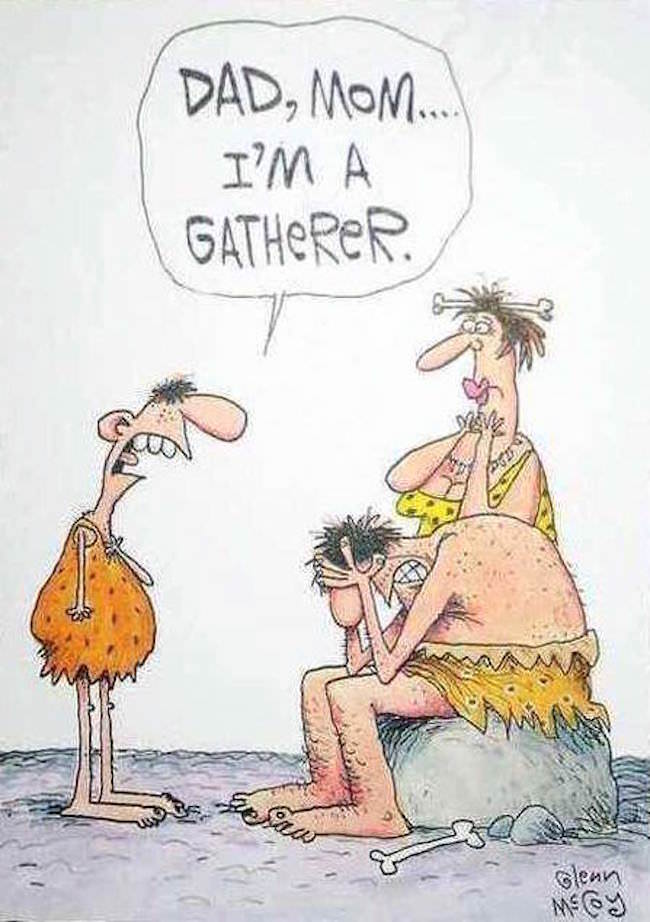 are you suggesting we eat the vegans and vegetarians?

I’m starting to sense a theme to some of your posts today. I think you need some rib-eye.

@london2z And you joined the Ketogenic Forum because…?

I Totally wondered the same thing, Michael --looks like a troll from all his posts.