How to reset Keto Mojo GK+ meter to zero readings

I am wanting to clear the memory on my Keto Mojo GK+ meter and can’t find a manual reset and no instructions. I can “delete/archive” on the website interface, but everytime I turn on the meter it connects to the bluetooth app on my phone and eventually re-populates the on-line with old readings.

I just want to start at a new baseline going forward into 2022 and erase everything off the meter itself.

Anyone else figured this out?

Wow, does this tell all with just one prick of your finger?? I’d go for investing in one of these as I haven’t a clue about my ketones. Didn’t even know there were meters like this!! PS does it have some sort of Factory Reset JP? I’d turn my bluetooth on phone to “off”??

Keto Mojo system is recognized by Virta Health. Buy it directly from KetoMojo and not Amazon. They have a starter kit deal, usually about $50-60 that includes meter, case, a reasonable starter supply of keto and glucose test strips and lancing device an lancets.

Yes. Haven’t heard back in a day or so. With holidays may be next week. That’s why I posted here. I suspect it’s an odd button sequence or something out of the norm.

So, it measure both ketones and blood glucose at once, for a single strip?

Yes you have two different strips. One for ketones and one for glucose.

For me the greatest benefit is being able to calculate the GKI number (glucose ketone index) which is a fairly well established formula that uses both readings to give you a number to help you see where you are in the ketosis realm.

Lots of articles on it. Here’s the one on Keto Mojo site:

The Keto-Mojo Glucose Ketone Index (GKI) Calculator: a simple tool that helps give you a better overall view of your metabolic health and state of Ketosis.

The is the best lay person alternative I can find that goes beyond the basic glucose reading or HOMA-IR, which requires fasting insulin and that requires a lab and MD.

Here’s the link to the starter kit. Looks like they’re running a Christmas/New Year deal-discount. They all run specials throughout the year on the strips. Kind of a razor/razor blades paradigm

This kit will take the guesswork out of ketosis so you can manage your ketogenic diet with success and get results. The meter includes state of the art technology with Bluetooth functionality that allows you to sync with the FREE Keto-Mojo app on...

Just received a Keto-Mojo as a present. I see nothing in the instructions about resetting the memory, but in the setup for the phone app, if you go into the Setup feature and then click on “Readings Data,” there is an option to “Clear All Readings.” That should do it, from what I can tell. There is also an option for archiving old readings, if you’re like to preserve them elsewhere before deleting them.

For me the greatest benefit is being able to calculate the GKI number (glucose ketone index) which is a fairly well established formula that uses both readings to give you a number to help you see where you are in the ketosis realm.

Yeah, that doesn’t work for some of us. I have very low ketones and higher blood sugar in the morning. Back when I was testing, my ketones looked like this (edit: these are from “home” and then “work” keto mojos, and a first-generation ketonix breath analyzer): 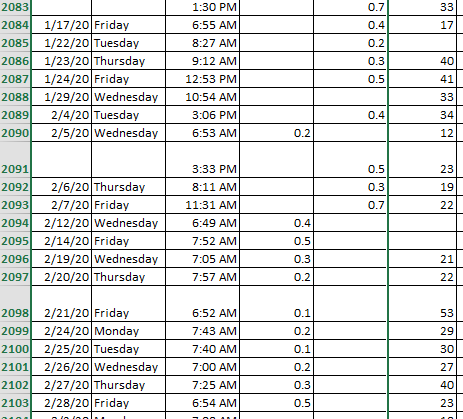 Yes, that’s over 2000 tests of blood sugar and/or ketones (blood and/or breath, mainly). Meanwhile, my blood sugar looks like this: 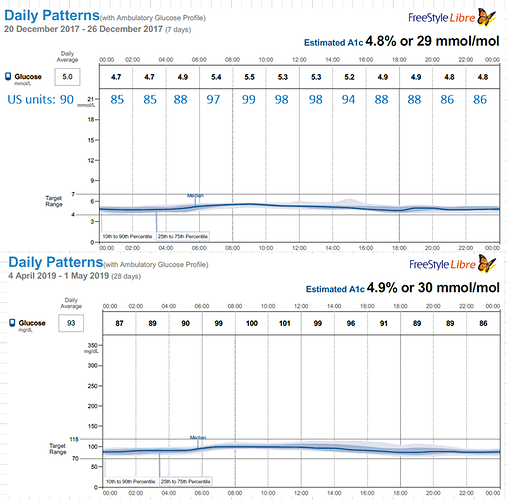 What this means is that GKI is “out” of ketosis in the morning, and back “into” ketosis in the evening. Take a morning blood sugar of 100. To get <9 on that formula, I’d have to get higher than 0.6 mmol/l ketones. As you can see in that chart, my morning ketones are never that high (unless I fast multiple days).

Does that mean I’m “out of ketosis”. No. My body had just adapted to over 8 years of being in ketosis.

Just received a Keto-Mojo as a present.

[I’d picture you more the spreadsheet-type-of-guy than a phone-app user, especially given data privacy. But dual backups rarely hurt.]

FWIW, I’ve gotten extensive use of my Mojo during the first 1-2 yrs of taking on the keto WOE. I found it to be well-designed with an inviting form factor and learned a lot (I think?) through regular daily use. Enjoy!

It’s a tool. Like I said the GKI is what like best. No one always in the same state of ketosis, but I usually can tell when I’m in deeper ketosis and when not. The main idea is to stay under 9. Some days my GKI is 2 (deep ketosis), most days I’m a 5-7. Still good. Most carb burners out there are in 12+ even fit ones. That’s all I try to concern myself with.

As I believe, high/consistent levels of insulin are the devils workshop brought on by constant snacking. The meter just gives me peace of mind and comfort I’m not out of a decent ketosis zone.

Yeah, I found that it bounces all over the place in the normal course of things.

Different factors drive the numerator, the denominator and/or both. For me, I’d pop from around 1 to 7-8 and back - all while eating minimal carbs and staying well in ketosis all throughout the months (otherwise, lacking the carbs, I’d be dead).

Depending upon when I measured during the day/evening I’d get big swings.

After a while, you just enjoy how good you’re feeling and stop fussing with the ratios of two highly variable variables.

Exactly. The other day I drank some leftover chocolate frappe I’d made for a customer, about 8 ounces. 30 minutes later I checked my glucose and it was 131. That’s actually normal for something like that.

What I really wanted to check was my pancreas’ response to that much of a sugar insult. So I waited 2.5 hours and rechecked. Glucose was 90. I was happy. That was a very healthy response and showed my system was functioning normally.

Of course though, the goal is to stay away from those type drinks/foods. But the meter allows me to randomly test myself under different conditions which is important on this journey so we don’t get freaked out over every outliar reading.

Of course though, the goal is to stay away from those type drinks/foods. But the meter allows me to randomly test myself under different conditions which is important on this journey so we don’t get freaked out over every outliar reading.

You might also gain some insights from testing at set intervals (e.g., 30 minute segments) in conjunction with post ingestion of certain non-sugar zero carb sweeteners.

In such cases, don’t even bother with those pricey BHB ketones - as they won’t budge much anyhow. Simply use the (cheaper) glucose sticks in the Mojo to see whether - and to what extent - your serum glucose moves.

Some of us are fairly sensitive to certain sweeteners like xylitol, erythritol, or stevia extract. Others (e.g., myself) are not at all sensitive.

In reality, what you’d really be measuring is your insulin response - which would drive glucose lower (if you’re reasonably insulin sensitive) whenever insulin rises, if it does, in response.

Some of us have a “brain” thing involved - where the sweetness on the tongue prompts an insulin response learned from reaction to sugar/carbs even if the substitute sweetener is not a source of carbs. Then again, some of us don’t have this reaction, or it’s fairly mild.

Good to know your own personal reaction to such things, in case you’re interested. If you have a hankering for something sweet, knowing that your insulin doesn’t react much to a non-carb sweetener helps you make informed choices about what you can “get away with” without producing an insulin spike.

You might also gain some insights from testing at set intervals (e.g., 30 minute segments) in conjunction with post ingestion of certain non-sugar zero carb sweeteners.

Yes, this is something I am curious to learn about myself. I would like to learn if I react to Stevia and other sweeteners.

Exactly. The other day I drank some leftover chocolate frappe I’d made for a customer, about 8 ounces. 30 minutes later I checked my glucose and it was 131. That’s actually normal for something like that.

What I really wanted to check was my pancreas’ response to that much of a sugar insult. So I waited 2.5 hours and rechecked. Glucose was 90. I was happy. That was a very healthy response and showed my system was functioning normally.

You should try readings more often, as you may not be getting a complete picture.
Here’s Thanksgiving, 2017 for me:

The 9.7 was the Thanksgiving meal, the bump after that was dessert. But between each two lines is 1 hour. My blood sugar goes up and down within a single hour. So, checking > 60 minutes or so – for me – is worthless, as it doesn’t show anything.

As for GKI, for me, it’s useless. I am never above 0.6 or so, unless I fast multiple days. So, for beginners like you, it might be interesting, but for me, it’s not. Here’s what has happened to my ketones over time: 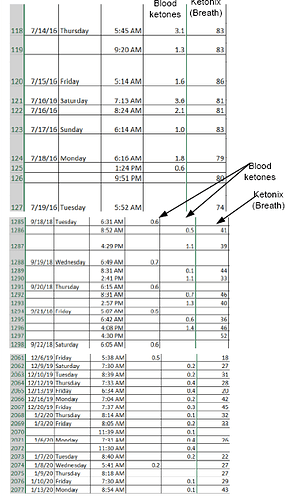 And then there’s this:

Feasibility of Continuous Ketone Monitoring in Subcutaneous Tissue Using a...

Measuring ketones in ISF using a continuous ketone sensor is feasible. Additional studies are required to evaluate the performance in intended patient populations, including conditions of ketosis and diabetic ketoacidosis.

This was a study of a continuous ketone monitor in a human. If that chart indicates what ketones actually look like for people on a keto diet, then taking ketone readings is not that useful.

For sweeteners, I agree that blood sugar testing might be useful. But you’re going to have to test every 15 minutes or so, if your blood sugar response is anything like mine.

FYI, I did get response this AM from Keto Mojo folks and told me what I had pretty much figured out: No you can’t delete readings off of the meter itself. (There should be a reset option IMHO). But can hide/archive readings off of the APP and Online. However the issue is that once your re-sinc your app to the meter they all come back again, unless I can figure out how to only sinc certain time range of readings, which you probably can, I just hadn’t gotten that far. Oh well. Still a great tool.

To hide a reading: Tap on the reading you want to hide, tap on “hide reading” under the reading display. That’s all there is to it!

To unhide the readings, go to your settings and under Data, select “Restore” next to Hidden Readings. NOTE: This will restore all hidden readings, as we do not have the ability to restore individually hidden readings at this time."

Just bought myself one of these. I will use it to try to discover correlations between blood levels of glucose and/or ketones and how I feel. My main issues are musculoskeletal pain (fibromyalgia) and bouts of extreme fatigue at unpredictable times. Did my first test just now:
Glucose 91
Ketones 0.4
GKI 12.4
Urine stick medium purple.
So strange. I ate 8 g carbs today, and I did a vigorous 3 mile walk earlier. I was feeling a bout of exhaustion when I did the test. Just had some caffeine to counteract that, and once the fatigue is gone, I’ll test again. I’ve been mostly keto for the past 2 years. If I get any interesting insight I’ll start a new thread.