She also has complete immunity against most viruses. She has O- blood like my uncle, cousins and 86 year old bipolar grandmother that still isn’t anywhere near kicking the bucket while she was around so many infected with Covid. I don’t expect Janie to die anytime soon or listen in regards to the dangers of continuous viral spreading by the asymptomatic. 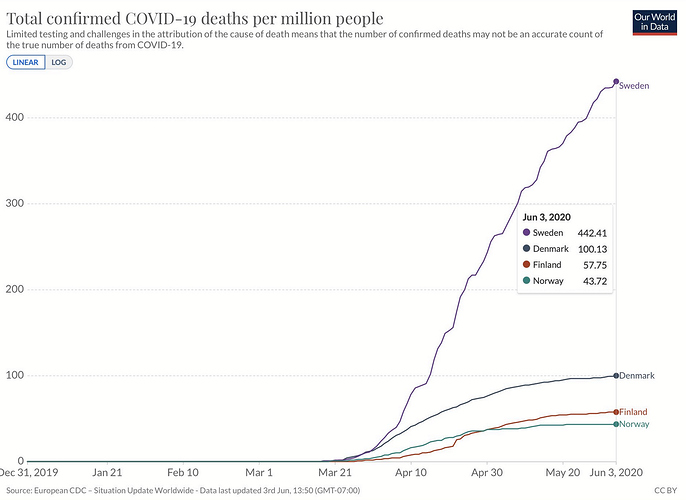 I apologise in advance if the blue is the wrong shade or whatever it is this time that invalidates the actual data.

I agree with you @Janie.

This virus is among us and those who are vulnerable to it if infected will become ill and may die before their time. It became a hot political potato which has not helped with dealing with it as if a government can actually protect the people from an unseen microscopic organism which asymptomatic carriers can spread without knowing they have it .

I think you are mistaken.

The virus was already out of control in the UK well before it was known to be out of control. The Chinese Communist Party was not open about their data and still isn’t. The genie was out of the bottle and the virus spreading outside China before the whistleblowing doctor was able to get the message to western nations.

The reason for so many deaths in the UK is the large elderly population who have a variety of co-morbidities together with an appalling diet being recommended by Public Health England (and devolved agencies) which leaves many younger people metabolically deranged. The elderly population in the UK and in Lombardy in Italy were particularly vulnerable this spring because those who might have succumbed to the annual influenza epidemic in the winter of 2019 - 20 were spared because it was a very mild form. They were therefore ripe and ready for the grim reaper when Covid-19 arrived.

I don’t believe I am mistaken. Some of the points you make about the CCP and poor dietary advice may be true but the fact remains that the UK government was slow to act. They allowed very large events to go ahead when it was clear they were a bad idea, they didn’t enact sensible border controls and they chose to abandon the test/trace/isolate strategy.

Oh and the other thing which is happening here in the UK is that the recording of deaths and attributing a cause has got all gnarled up.

COVID deaths – how accurate are the statistics?

31st May 2020 [This article was first published on RT.com, and can be seen there at As a doctor working in the midst of the COVID chaos, I’ve seen people die and be listed as a victim of coronaviru…

For a “pandemic” I still can’t name a single person out of nearly a thousand contacts (mostly work) who have had the disease.

Including the asymptomatic ones?

Yikes. I hadn’t seen this thread for a few days. @Consistency and @petert I don’t think it needs to get so nasty. Just out of curiosity, I looked up “unproductive old people” because I was so surprised that @Janie would have said such a thing, and @petert was the only one who actually used it - twice, in fact - but makes it seem like a quote of Janie’s. Why would you do that?

The economic ramifications of the shutdowns are already devastating to a lot of people. As that continues to play out, we may find that unless you institute an absolute lockdown very early on, a shutdown might do more harm than good. Among other things, at least in the US, the lockdown has moved much of the population deeper into the metabolic state that makes them much more likely to die from the virus. More processed food, less time outside, less movement and more depression is not an ideal combination when it comes to insulin sensitivity.

I could be wrong, obviously - all of us could be wrong - and we’re very far from seeing all the data, so this entire discussion is speculative. In any case this is a place for thoughtful debate, not for twisting someone’s words and being dismissive of their POV.

I totally agree here. Our government locked down when advised to. The people wouldn’t have locked down earlier. Hindsight is always a wonderful thing.We’re paying extortionate amounts of money to people to help keep them afloat. Someone I know of working in a care home said any deaths they had were put down to Covid 19. Someone at my mums place apparently had it but the only people being tested were those in hospital, so you get a temperature and a cough and apparently you have the disease. Remote areas and countries do not suffer as much and as for track and trace there is a point where there are too many people with the disease to effectively carry that out.

For a “pandemic” I still can’t name a single person out of nearly a thousand contacts (mostly work) who have had the disease.

That’s cool for you.
I know several people who have contracted the disease (as in, who have actually been tested positive for it). All healthy young people (in their late 20s/early 30s, no comorbidity factors like diabetes or obesity or what-have-you). I’m happy none of them died, though one of them did end up in the hospital for a while and every one of them said it was one of their worst experiences ever. I know of one person who died from the virus (indirectly, a friend’s family member) who was doing on paper everything right, except she had her groceries delivered by a seriously callous family member who thought that wearing gloves or disinfecting things was bull**** and didn’t take any precaution at all, because, you know, HE wasn’t sick and the whole thing was obviously blown out of proportion, and it wouldn’t make a difference, and blah blah blah. I don’t know if her DEATH is going to change his mind, but it did make it clear to me and my friend that this needs to be taken seriously.

For the past few weeks I’ve been volunteering at my city hall to do grocery shopping / pick up meds for vulnerable people (mostly isolated elderly people and disabled people) and we have protocols in place and it DOES make a huge difference. You know, if you actually follow the guidelines and don’t infect them in the process. I haven’t been tested and I rarely get sick anyway, but I might very well be a carrier without being aware of it. And acting callous can lead to death, I’ve now seen it firsthand. But shielding vulnerable people only works if everyone takes precautions. I didn’t know any of these people beforehand, but they don’t deserve to die just because I’ve decided that going out and not protecting myself was totally fine since I’m not symptomatic.

So be thankful you don’t know someone who contracted the virus, but don’t assume your limited experience is representative of everyone else’s. People actually die out there. And protecting the one who are vulnerable isn’t just about isolation, it’s about a boatloads of precautions that can only work if everyone plays a part. You only need one selfish jerk to infect a dozen of people. And for some of them, that’s a death sentence.

Just out of curiosity, I looked up “unproductive old people” because I was so surprised that @Janie would have said such a thing, and @petert was the only one who actually used it - twice, in fact - but makes it seem like a quote of Janie’s. Why would you do that?

Eh. Maybe. Almost half the deaths have been in nursing homes where people go to die. Callous? Maybe. But nobody who is healthy and can take care of themselves go into nursing homes. How many would die anyway? The only statistic that matters is overall death rates. Positive for COVID-19? No worries as most recover. I have not seen a single statistic that shows the overall mortality rate has increased while we wreck the economy.

You’re mistaken regarding it being nasty and making things worse by not accepting the facts that have been posted. Janie likes to give her opinion and then derail the conversation from the original point after the data has shown that the Sweden way leads to more deaths per number of people.

Life is worth more than many useless businesses that could careless about our health.

People never listened and still don’t listen in regards to social distancing and going to grocery stores when absolutely necessary. Grocery stores were always packed and I remember hearing from family how overweight people would drop out of line all the time because they didn’t actually need groceries.

no, not really. You paraphrased her without regard to the context of her remark and treated your paraphrase as a stand-alone quote that you attributed to Janie.
Re the context of her remark: all else being equal, I don’t think anyone wants elderly folks in nursing homes to die. But all else is not equal, and there’s a cost to focusing the efforts to reduce deaths in nursing homes. It may turn out to be a severe cost. Maybe it’s a cost that as a society we are willing to pay but it’s one that needs to be discussed without immediately resorting to accusations of anyone who raises it.

Life is worth more than many useless businesses that could careless about our health.

Compare it to locked down Belgium…

No, I asked the employees who worked at these sites since I meet with them weekly and all sites are required by our management to track and report all COVID cases to the sites.

Not anecdotal - cases tracked my management at each plant site since they are all still running 24/7.

And of course they don’t track asymptotic.

So be thankful you don’t know someone who contracted the virus, but don’t assume your limited experience is representative of everyone else’s.

I am thankful and only reporting my personal experience and do not assume it applies to anyone else.

Sorry for the loss of your friend. I have stayed away from my elderly neighbors in case I carry the virus and asymptomatic. Except when they ask me for eggs. I do not wash them since that removes the protective coating nor do I wear gloves when I collect them since I do not sell them. If they want to wash and sanitize them then that is up to them.

So why is the UK right under Sweden when they locked down much more stringent?

Because of population density. The vast, overwhelming majority of Covid-19 deaths are in England, rather than in Northern Ireland, Scotland and Wales, and those latter three are not even 1/5 of England’s population.

England is 18 times as densely populated as Sweden. We’ve repeatedly seen that densely-populated areas, and large metropolitan areas, generate much faster virus transmission and (naturally) a lot more cases and deaths. (Look at New York City versus almost all the rest of the U.S.)

Sweden doesn’t even have a city of a million population, and only two - Stockholm and Gothenburg - over half a million. Nevertheless, 85% of Swedes live in urban areas. I think it’s a “middle ground” deal - all other things being equal the virus would spread at a medium rate, versus other countries. 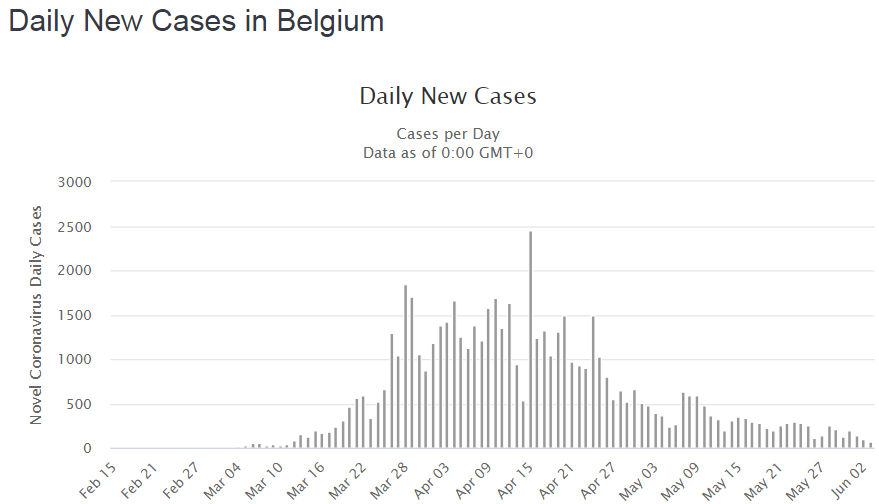 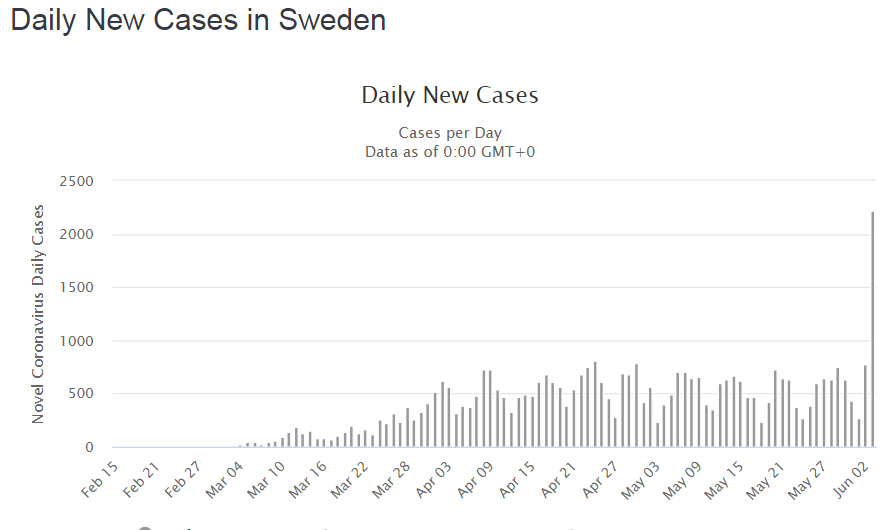 I don’t know what happened yesterday in Sweden - did they put the whip to the backs of all testers?