Fish is not that filling?

Didn’t check a whole bunch of different cuts/species, but apparently I’m not seeing what you’re seeing?

Really not a surprise, do you have any clue how many entries are in that thing? How many brands? How many cuts? How many iterations of each? I went buy the first that cronometer brought up on each and set it for 8oz. I couldn’t even tell you which ones I picked at this point.

I’m talking total fat content, I don’t concern myself with the breakdowns as I see no point to it. Unless you’re eating a ton of one specific type for some reason that may be an issue for you specifically, even as a tracker I see that as a waste of time. That’s just me. I know some people have decided that it’s a specific fat type that’s the cause of all their issues, I think for a very small minority there may be something there but for the majority it’s just overblown. 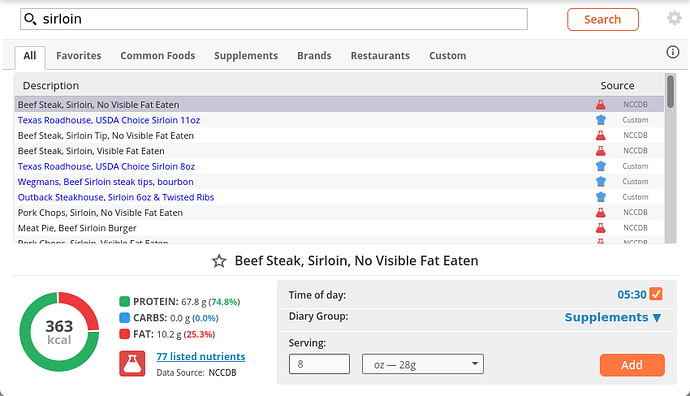 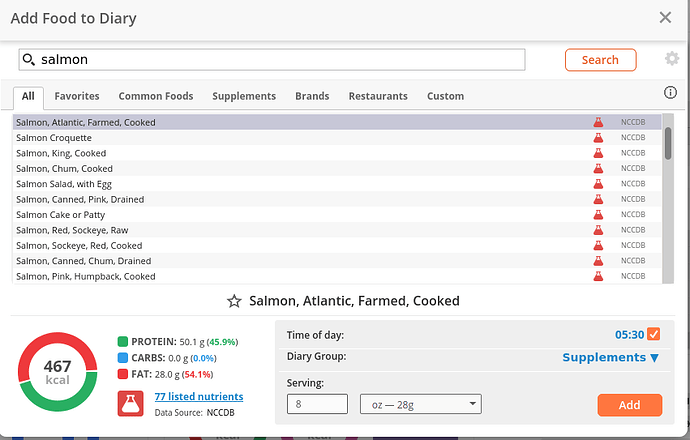 fish isn’t a heavy hitter. not dense. kcals are lower against meat food.
Like a lb of salmon is around 800 kcals and a lb. of steak, full and not trimmed fat has around 1200 at least and probably more depending on that steak cut being measured…to fill up on fish eat alot more of it.

then eating fish with even butter will not hit that satiaty factor dense muscle type meat will ever give most people.

fish in my zc world is a ‘side item’ to eat. never a main meal. It is like eggs, so many people can feel full with eggs and to me, they mean nothing, like fish

So everyone will do well on it or just find it is the most unsatisfying food to eat…whichever one you are, if it is not filling you up, eat alot more of it. Or pair with eggs like mentioned. Anyway to fill up is good but just eating a whole lot more of it is best if your hunger is that tough.

Need lots of tarter sauce. That helps. Plus some type of keto side salad, like broccoli/cauliflower salad.

I really appreciate you showing the screenshots, because I was a bit baffled by this discussion.

I would say that the first entry, of Beef Steak, Sirloin, No Visible Fat Eaten goes some way to explaining the discrepancy.

But more than that - for any Brits reading! - sirloin in the US and UK aren’t the same cut (I think sirloin for the US is called rump here, which isn’t a particularly fatty cut) - which also explains my confusion!

I was looking at my sirloin that I’m eating now and thinking, “How can this be less fatty than a salmon?!”

I love salmon and have always eaten a good amount of it. I’d say my conclusion is that the leaner cuts of beef might have less fat than salmon, but the fattier cuts of beef will have more fat than salmon. The lesson is to choose your cuts wisely (and also be aware that choosing not to eat the visible fat will affect your intake).

it is more about calorie density of the food.

eat 1 stick of butter…it is about 800 kcals
are ya full? nope. and for most probably some icky gut troubles coming your way

eat 800 kcals of steak, more full then that butter LOL

fat is filling but it is also about what meat/seafood/fish is also wrapped around that food intake.

dense protein vs. not dense for satiaty.

I tried mackerel in that recipe too and it worked really well. Sardines are up next

But more than that - for any Brits reading! - sirloin in the US and UK aren’t the same cut (I think sirloin for the US is called rump here, which isn’t a particularly fatty cut) - which also explains my confusion!

There are some different names for same cuts sometimes (which I’ll never understand) but Sirloins and rumps are different parts of the cow. The Sirloin is from the top near rear section right above the tenderloin. The rump / bottom round is the lower back of the legs. 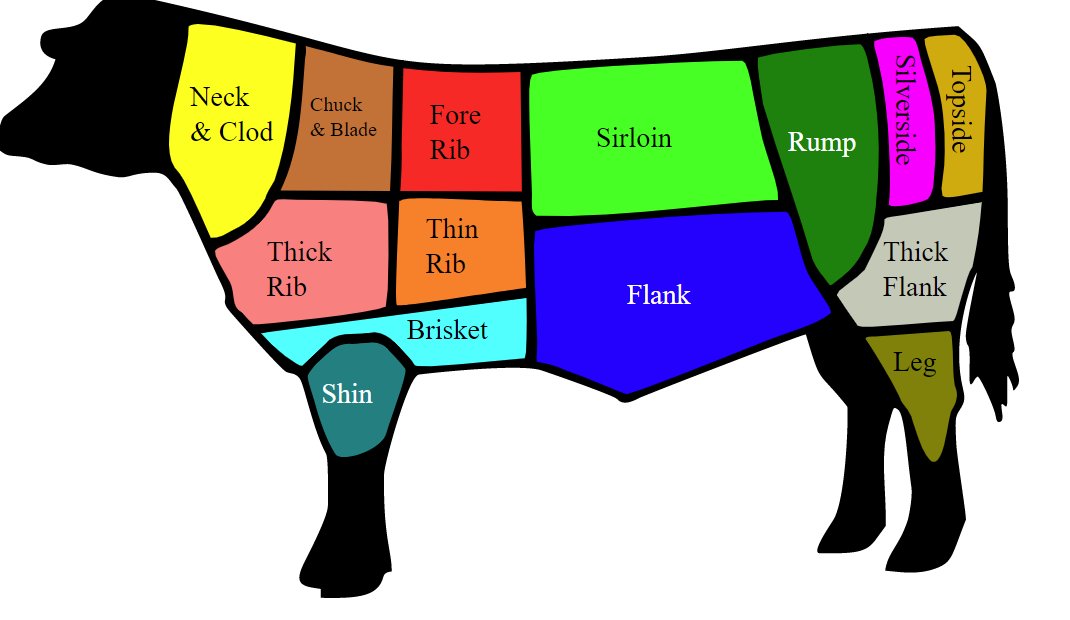 Your diagram is just American cuts. I have uploaded the British cuts for comparison.

On the British diagram, you can see how your sirloin matches our rump.

I may have to bring eggs to work, too, if I continue to be this hungry.

That’s me, for sure. I’d pay extra for the highest fat-content burger meat at Walmart if need be… but it’s always cheaper. Go figure!

I don’t concern myself with the breakdowns as I see no point to it.

One good reason to do so: The various “kinds” of fat are not at all equivalent as they produce meaningfully different health outcomes.

Just to add to the confusion, the USDA entries I picked showed the following:

This may very well explain why the salmon was so much less satisfying.

Well, you managed to find a cut of meat PLUS no visible fat eaten to back up your claim LOL

Ribeye, hamburger (80%) and sirloin “with visible fat eaten” are both higher than salmon per 100 g with ribeye being over 3 times and hamburger double the fat of salmon.

So, both claims are correct - just need to clarify which cut of beef.

Well, you managed to find a cut of meat PLUS no visible fat eaten to back up your claim LOL

Nice try but if you actually read up you would have seen my original comparison was to a piece of Sirlion, which isn’t fatty. “No visible fat eaten” typically means as “I didn’t eat what normal people cut off”. Not that there was zero fat in the steak. That was my whole point. The cut matters.

Sorry, I should say that I gave up on fish. I just made an omelette with a lot of cheese. One time, I took very fatty (10% fat) yogurt, with dark chocolate, cacao pieces, and coconut.

Personally, I think if I’m hungry after eating a meal when I wouldn’t normally be, then I’m hungry. I also really don’t care about macros, having never looked at a single one of them the last 7 years.

To the extent that I ate fewer calories, that might be a problem. But I regularly take lean beef, say eye of round: 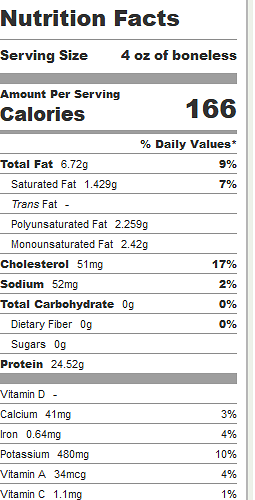 Maybe if I wanted to retest this (which I don’t, as I really don’t like fish), I would eat the same calories in fish and beef and compare.

Normally, I LOVE to test things, but since I eat fish weekly only during Lent, it’s really kinda meaningless if I don’t like fish in the first place. (Sorry to those of you who do like fish.)

But sirloin “with visible fat eaten” is higher in fat than salmon. Same cut of meat - just how you eat it.