Eggs, OMG I'm so sick of eggs, but have a ton

What can I make that has a LOT of eggs and can be FROZEN to eat later, that does not fall into the categories of fried eggs, scrambled eggs, boiled eggs, quiche?

I want to eat them, I do. I buy them from my gunsmith whose wife raises chickens. But I have a bunch, I am so sick of eggs I can’t believe it, and I want something I can freeze for the future.

Any ideas would be welcome. I mostly eat meat and cheese, and have apparently not expanded my egg menu nearly enough.

Mix raw with ground beef, form into patties and freeze the individual patties for later cooking by your preferred method. Mine is sous vide. But grilled hamburger is an excellent alternative!

I never thought of mixing eggs into hamburger. That’s not icky?

I guess I’ve heard of mixing an egg into meatloaf now that I think of it.

I suppose it all depends on proportions. Doesn’t everything?

I have heard that you can break eggs into a silicone muffin pan and just freeze them for use later. Obviously freezing in the shells is not a good plan but I have yet to try this.

How many eggs? I never had more than 250 and that’s no problem for me. I live on eggs, basically. They are good for nearly everything

I won’t have such a situation again) but even then, some egg dishes works.

Mixing eggs with meat isn’t a bad idea ;). I mixed them with boring, tasteless beef (the flavors went into a soup and I don’t like beef very much anyway), boring, tasteless fish, boring, tasteless tendons or what was that stuff… All of them were ground… And fried the result as some carnivore flatbread. It was always pretty good but tastes differ, of course.

If I hate eggs at the moment, that’s tricky as I must eat them as my favorite eggy desserts. But it’s rare. I can put them into coffee, though… I don’t mind raw eggs but one can pasteurize them.
If I just got bored of normal egg dishes, I use other egg dishes. There are very many! I usually can eat pancakes even if I somewhat dislike eggs at the moment. I mean, not sweet pancakes as sweet ones are desserts and I can eat them very nearly any time.

The mixed stuff probably works well frozen, before or after frying… It’s known freezing egg whites is a thing so if you like something with lots of egg yolks, that can help. I froze egg yolk things too (my ice cream is mostly egg yolks. it freezes rock solid but it’s nice when it’s half-melted).

Oh I froze a whole egg once, with shell and everything

To do those tiny sunny side ups from the frozen slices

I like egg loaf, but they’ve never lasted long enough that I’ve needed to freeze them, so not sure how well they’d freeze and thaw: 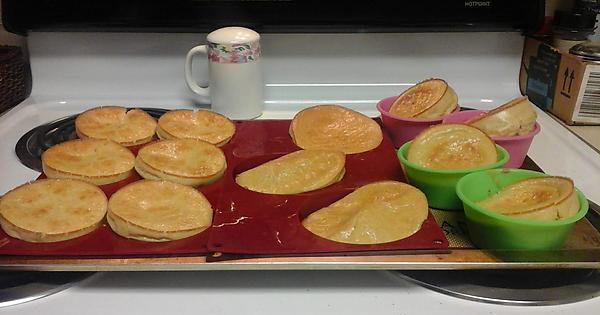 I would think most of the various egg muffin recipes would freeze and thaw nicely?

The Right Way to Freeze Eggs

It's pretty easy (and very convenient) to freeze eggs for later use. These guidelines explain the process for freezing whole eggs, yolks, and whites.

Can you FREEZE EGGS? **YES!** Here is how to Freeze Eggs

The ultimate guide to answer the question "Can you freeze eggs?" Step by step tutorial on properly freezing eggs and how to thaw eggs to bake and cook with.

I never thought of mixing eggs into hamburger. That’s not icky?

We call that a meatball!

Thanks you guys.
– Egg muffins are just quiche in muffin form, don’t like it
– Egg nog – that does use yolks, I could do some of that!
– Pound cake – had no idea it used more eggs than other stuff, will check it out
– Meatballs. Oh right! Yeah that makes sense.

Trivia: When I put coconut flour, parmesan cheese, herbs, and crushed pork rinds on small pieces of chicken and baked them, it was great! When I put crushed pork rinds INSIDE a ‘chicken ball’ meat ball, it was horrific and nearly inedible. Rather than being dry and crunchy, the rinds were like hard as a rock dense solid. Boy that’s something I won’t do again.

I wonder if it’s possible to make angel food cake with alternative sweeteners. Isn’t that a boatload of egg whites…

edited: forum having issues earlier, all my likes vanished and this post didn’t come through. Was from this morning.

I have never tried freezing it, but I have made pretty tasty SF lemon curd before. It takes a boatload of egg yolks.

Just plant them in the garden. They’ll grow up into wild chickens in no time, and no one will be the wiser.

I wonder if it’s possible to make angel food cake with alternative sweeteners. Isn’t that a boatload of egg whites…

Of course it’s possible. I am more like the sponge cake (my style, more yolks than whites) and pancake person (I eat pancakes almost every day, sponge cake takes more time and I prefer pancakes especially now that carnivore is my default, preferred woe) but I made angel cake too. If you use coconut flour, maybe sweetener isn’t needed - but sweeteners are optional anyway. My pancakes and sponge cakes are often not sweet ones but even for a dessert, using sweeteners is a bit overrated if you ask me…

I have a nice cheesy whipped egg white stuff too, no need to worry about flour in that case, that’s traditionally carnivore (I mean since I make them, I started in my mostly vegetarian low-carb times). Just whipped egg whites, some spice if you want, some ground cheese and I put smoked cheese in the middle of my muffins. As mine aren’t very cheesy, I use a tad salt too. They became so nice and big in the oven but they lose that soon, oh well, it’s fun to look at them there. When they are nicely tanned, they are done. My family likes them. I would prefer more crunch and too much work for some bites, I can eat eggs easier. But it’s nice to have them sometimes. Quiche is better but I can use up 8 extra whites in them and they need some dairy with lactose too (at least I always used some cream).

There are so many good eggy recipes… I still just scratch the surface (okay, maybe a bit more serious after my 20-25000 eggs in the last decade… but they are hard to get bored with so I mostly use the same simple recipes)…

hollandaise sauce with the yolks, meringues with the whites?

I second this. I make bread with the egg whites, and mix the yolks with some cream, water, vanilla and honey (or stevia), and it’s soooo good. Very rich and you can’t taste the eggs, I could drink it all day.

Carni-waffles!
Along the lines of Michael’s suggestion but you take ground beef and eggs, put them in the food processor or blender to get a batter like consistency then make waffles (or pancakes).
I’d suggest precooking the beef so that it’s less messy, though.
My kids love these and specifically ask for them.
Also, they freeze well.

I would try them raw and drink them if I had more eggs than I knew what to do with.

Eggs are the best thing to eat on planet earth.