All the talk about what ketone numbers “should”
be on YouTube, never seem to clarify exactly when we should expect these particular numbers. For example, I just took my ketone and glucose readings 1 hour after a meal, and they were 0.8 and 92 respectfully. On YouTube I hear all the time that the “optimal” ketone range is around 1.3; okay, but when? In the morning? After a meal? At any given time? After fasting? If so, after how long? Or is it more important what my glucose is after a meal and my ketones less so?

Any clarification would be much appreciated!

From what I have seen its an “in general” measure.

Ketones tend to be lower:

Ketones tend to be higher:

Don’t stress on the actual levels, mine tend to be a bit all over.

As far as glucose, just keep it as low as you safely can. Let the ketones fall where they may. Its better to keep your glucose steady. For example, I’m trying to keep mine in a 70-90 mg/dL at all times, UNLESS I’m fasting. If I’m fasting (for more than 24 hours) then I’ll see my glucose drop off (and ketones will go up to compensate).

You can check out my fasting logs for examples of this.

@gangelo Great question! And no doubt you’ll get a nice range of answers. Here’s mine…

Your ketone figures will like wander all over the map - throughout the day, week, month - and this variability won’t actually mean a whole lot in the larger scheme of things.

If you’re significantly reducing your net carbs (e.g., <20g/day, especially when first adapting to keto eating) and getting an appropriate amount of proteins (say, roughly 1-2 g per kg of lean body weight), with all the rest of your daily calories coming from healthy sources of fat, well, then you’re in ketosis. Period.

As some are fond of saying, if you’re eating less than 20g of carbs and breathing, you’re in ketosis. (Unstated alternative being: otherwise, you’d be dead - for lack of dietary glucose, your body MUST be producing ketones for you to not collapse.)

To use my case as an illustration: when I first began eating keto, my blood ketone levels quickly posted 2-3 mmol/L. Then quickly they began to surge to 4-6 mmol/L and stayed there most of the time for weeks on end. Occasionally 3-4, sometimes >6, but generally they bounced all over the map at these “lofty” levels.

Then … for no apparent reason (same diet, exercise, sleep, low stress), they began to descend. More currently, they fall in the 1-2 mmol/L zone. And this morning, ketones registered 0.7 mmol/L (although admittedly I had more Asian take-out food last night of questionable pedigree, although I ate only the meat and green veggies), plus I do feel a little “off” this morning.

My larger point is that intra-day variability is hard to nail down since we’re all different - not only from each other given our unique reactions to various foods and prevailing metabolic states, but also we’re markedly different from ourselves since our metabolisms adapt and adjust over time.

I would strongly encourage you to take all of the many answers you’ll receive (including this one) along with a grain of salt (actually, several grams of salt might be a better idea, including sufficient magnesium

) … your own ketone data series will be keenly interesting to you - for a while - and then it will become less fascinating as you begin to “measure” your progress primarily by how you feel, not by what a blood test suggests.

Hope some of this actually makes sense and becomes useful to you over time.

On YouTube I hear all the time that the “optimal” ketone range is around 1.3; okay, but when? In the morning? After a meal? At any given time? After fasting? If so, after how long? Or is it more important what my glucose is after a meal and my ketones less so?

[1] How to use your blood sugar meter as a fuel gauge: ”…Will monitoring my blood sugars help me enter ketosis? The most straightforward approach is just to measure your blood sugar levels when you feel hungry and not eat until they drop below your target level. You could still use this method even once you have improved your insulin sensitivity to losing weight by targeting even lower blood glucose levels before eating.

The chart below shows the sum of blood glucose and blood ketone levels for people on a low carb or ketogenic diet. While a low carb diet helps to stabilise blood sugar and removes hyperpalatable foods when benefits a many people in terms of weight loss and energy levels, some of the major benefits are reserved for the periods when we are in a low energy stage (e.g. reduced insulin levels, autophagy, mitochondrial biogenesis, increase in NAD+ and increase in SIRT1). It is in these periods of low energy that our body goes into cleansing and repair mode so it can survive through the famine to be able to reproduce in the next time of plenty. 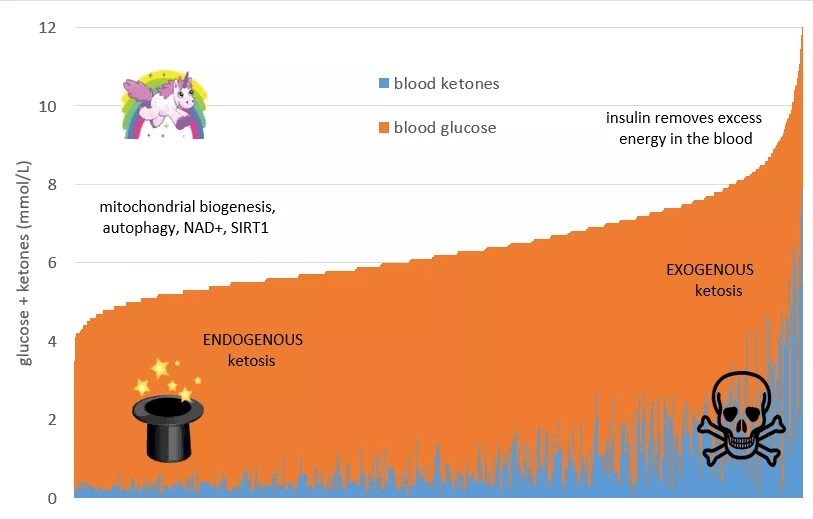 Zooming in on the left hand side of the chart, we can see that it’s the periods when we drive the energy in our blood down through delaying eating or restricting energy intake that we get the major benefits often associated with a low carb or ketogenic diet. 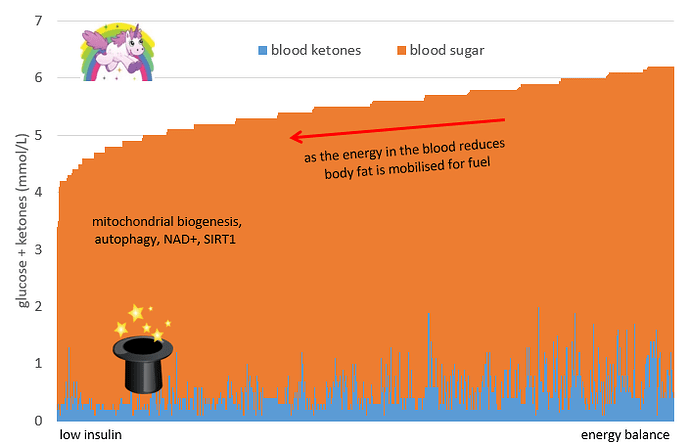 You will likely have some blood ketones in your bloodstream when your blood glucose levels are low, but they may not be at the levels that many consider to be ‘optimal ketosis’. As shown in the chart below, if your blood glucose levels are at 4.5mmol/L or 80 mg/dL then you you might expect blood ketone levels to be somewhere between 0.3 and 0.7mmol/L. If your blood sugars are at 4.9mmol/L or 88 mg/dL your ketones might be somewhere between 0.4 and 1.1 mmol/L. …” 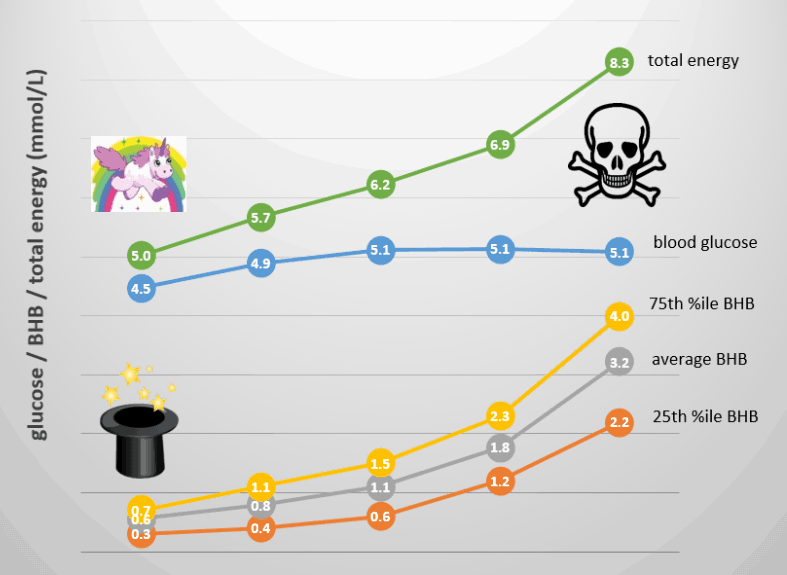 While measuring ketones can be interesting, they tend to be a much noisier measurement. As the glucose in your blood reduced your body will be forced to turn to your body fat stores, so you will increase your fat burning. Part of the reason that you may not see high levels of ketones in your blood though is that they are being used efficiently for fuel and not backing up in your bloodstream. So if you have limited funds for test strips and don’t want to be pricking yourself too often then I would focus on blood glucose levels. …” …More

”…Annette talks a lot about the glucose/ketone ratio (or GKI). Here are a couple of tables to make it easier to see which range you are in. If your BG readings are in mmol/L just divide BG by BK and you will get a single digit number as in the GKI column in the table below - just forgot the ratio bit! So just read the digit on the left - 4, 2, 1, etc.

The zones are general. Your results may vary. Mine do! If I want to lose weight, I need to drop below 2 (40 on US scale). My headaches are better (less frequent) at this level too. …” …More 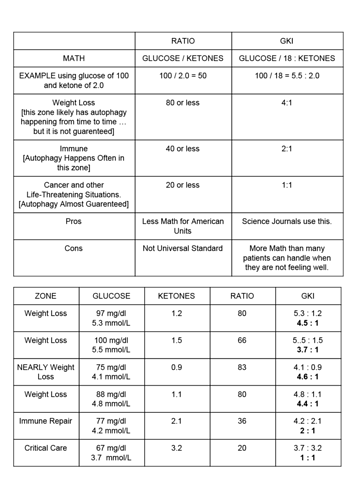 On YouTube I hear all the time that the “optimal” ketone range is around 1.3

This statement about what is “optimal” is the problem (i.e. we’re all different and have been keto for different amounts of time).

There are two issues at play here (at least):

Thank you. Yea, what is the deal with “Net carbs?” I know what they are, but I hear all the time “not to count net carbs.” I stay under 15g (most the time < 12g). I do seem to do better weight-loss-wise, bloat-wise, body composition-wise the less net carbs I have, but my goodness, how do you take in the nutrients you need with so little vegetables?

A lot to soak up there, but some of it IS starting to sink in, TY!!

I mentioned “net carbs” as an issue because sometimes people eat processed snacks that indicate they have low net carbs but, really may be a source of low ketone levels and weight gain (for some). The “keto” snack companies use all sorts of logic (which not everyone agrees with) to put a low “net carbs” number on their packaging - they’re very motivated.

Net carbs in vegetables - where you can look up values on the internet and no one has a reason to lie to you about the fiber content - I think net carb numbers there are fine to calculate and use.

how do you take in the nutrients you need with so little vegetables?

To avoid bloating and maximize nutrients I usually sauté dark leafy green vegetables in grassfed butter. Much easier to eat than the corresponding “big salad” sized serving of greens I start with (like 6 or 7 cups cooks down to a cup). Also, the butter and some sprinkled on cheese make it a great “keto” food and - with the right cheese, like crumbled blue cheese - the taste is great.

That’s what I do too, just not the butter because I am allergic :(. How long do you cook them; doesn’t it deplete the nutrients if you cook it too long?

I don’t cook it down to total mush. Probably about 75% of the way to mush - so it still makes a pile on a plate and has a bit of chew to it vs. flattening out on its own.

Deplete nutrients(?) - the article below says spinach is better for you sautéed but broccoli is better raw. What is the best way to cook vegetables to maximize their nutritional value?

Assessing the balance of benefits between raw versus cooked, steamed versus microwaved

Don’t worry about ketone levels, unless they rise significantly above 10 mg/dL, which could be an indication of ketoacidosis (which is not likely, so long as your pancreas is producing any insulin at all).

Dr. Phinney and Prof. Volek define nutritional ketosis as anything above 0.5, with 1.3-3.0 as pretty much the ideal range. These are levels at which most of the people they studied showed the benefits of a well-formulated ketogenic diet. However, judging by the reports of people on these forums, many people experience those benefits at lower or higher levels of ketones. Part of the variance is no doubt that meters are calibrated differently, test strip batches vary in sensitivity, and so forth. Factor in how highly variable we are as individuals, and you get quite a wide range of readings at which benefits occur.

Deplete nutrients(?) - the article below says spinach is better for you sautéed but broccoli is better raw.

That person has never compared raw broccoli versus roasted broccoli.

Personally, I think all veggies should be cooked (save salad). They’re hard enough to digest and get nutrition out of, and cooking helps that.