Are there any benefits to metabolic flexibility?

The culture goes back many 10s of thousands of years.

Do you have a citation? The Holocene began 10kya. No doubt both knowledge of and utilization of edible plants existed prior to the beginning of actual cultivation and selective breeding. But 10’s of thousands of years?

Farming/cultivation was not practiced by Australian Aborigines prior to European contact, although it was practiced by much of neighbouring Melanesia dated to the early mid-Holocene (3-6kya) and large areas of Australia are suitable.

I’m not talking about farming and cultivation. I suppose I’m referring more to gathered “plants” than what most people think of as carbs. I have a hardcover book developed by the local people along with a few scientists to show the local food uses. You’ll note that I said that Meat/hunting is the main thing, with a sideline of plants. And this is how I eat.

If one keeps to basic ingredients that could potentially grow/live near you as opposed to food prepared by others and or coming through the post, and avoid the sweet/starchy things, I think most people would be ok.

but the ‘food of right now’ is so polluted and so over the top out of real nutrition involved that it almost can’t be normal anymore, cause the ‘normal food offered today’ is not ‘normal’ and alot of people won’t take that step of ‘ditch this and that yummy stuff out there’ for just a plate of fresh meat and a few fresh veg on the plate.

everyone wants the crap…lol…I know I did LOL
but your insight is so right on this. So basic and simple but with our food out there now and the addiction to it…until the food changes the bulk of society will always be sick and less than in health.

Until you get cultivation and subsequent selective breeding, plants, even under the best circumstances can only represent a very small percentage of daily nutrients. Until the advent of the Holocene the climate conditions on Earth were unsuitable for widespread and/or successful cultivation of plants. And since our human and pre-human hominid ancestors grew big brains and small guts (along with smaller teeth and weaker jaws), they had to have consumed primarily, if not exclusively, concentrated nutrients - ie animal flesh and organs.

There is a contention that consumption of tubers, such as yams, was significant in the evolution of hominids. The claim has been made that the knowledge to find and identify them, the use of tools required to dig them out of the ground and the necessity of roasting and/or boiling them to extract maximum available nutrients played a significant role in how our ancestors evolved and became human, rather than simply just another forest dwelling primate chattering in the trees.

No doubt it required some degree of mental acuity/intelligence to find the right plants and a degree of motor skills and dexterity to manipulate the tools necessary to dig them up - it’s far more likely humans got these skills from hunting than from searching for and eating nutrient dilute tubors. Also, there is no evidence of utilizing fire consistently for cooking prior to about 500kya and without roasting and/or boiling the nutrients in tubors are even less available. 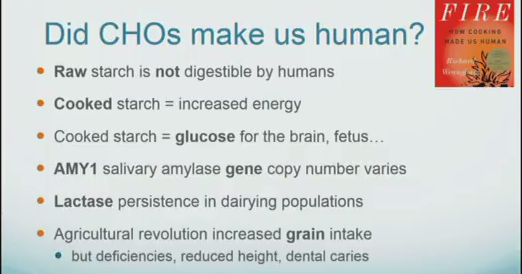 Did CHOs make us human? I doubt it

the GMO changes to say, wheat, can be tracked now to its origin, where it was sold, and what regions ate that certain wheat and more.

Monsanto's experimental genetically engineered wheat has been found growing in a field in Washington state, the U.S. Department of Agriculture (USDA) confirmed last week. This discovery not only raises concerns over GMO contamination, it could be...

our food is not real and what monkeys are behind the changes aren’t coming to light either.

I say back to simple basics is the key to life as it was when it started…and while it ‘seems’ like some crazy future novel of disaster, darn if we aren’t truly in it and living it

Is glucose something that is necessary for survival? Otherwise our cells would not naturally have the ability to metabolise it? Or is the metabolising some sort of defense mechanism against too much?

Yes, necessary. But we don’t have to eat it. Gluconeogenesis synthesizes all we need for good health.

Certain cells, such as our red blood cells, lack the mitochondria to be able to metabolise fatty acids or ketone bodies, so they require glucose (which can be metabolised anywhere in most cells). I have also heard that certain parts of neurons are too narrow to contain mitochondria, so they, too, require glucose (though I have also heard this notion challenged). In any case, if we eat no carbohydrate at all, our body maintains a low level of glucose in the bloodstream, and our muscles and liver maintain a certain amount of glucose stored in the form of glycogen. But the circulating amount of glucose is quite small, if the body is left to manage itself.

My understanding is that glucose metabolism is far older, evolutionarily speaking, than fatty acid metabolism. The presence of mitochondria in our cells is a form of symbiosis between the cells of our body and organisms that used to be separate. (This is known, because the mitochondria have their own DNA, separate from the DNA in the nucleus of our cells, and mitochondria with different DNA will fight and kill each other, and the cell containing them.)