High LDL Question on keto for about 7 months

Why do you think I have this?

An HbA1C is borderline pre-diabetes, but actually, looking back, I believe I was thinking of the OP’s post, in which he said his was originally 6.1. Sorry for the confusion.

Not only that, but even in the studies that purport to show a positive correlation between between cholesterol and heart disease show an increased risk on the order of 1.35 to 1.5. Most statisticians won’t even wake up from their naps unless the relative risk is at least 2.0. By contrast, the risk of lung cancer from smoking is something like 5 to 30 times the risk (again, depending on the study) when people don’t smoke. That, and a number of other factors, permit us to conclude that smoking does indeed cause lung cancer, but not a single one of those other factors applies in the case of cholesterol/LDL and cardiovascular risk.

WHO data, graphed by Zoe Harcombe. LDL is protective. Don’t get conned. 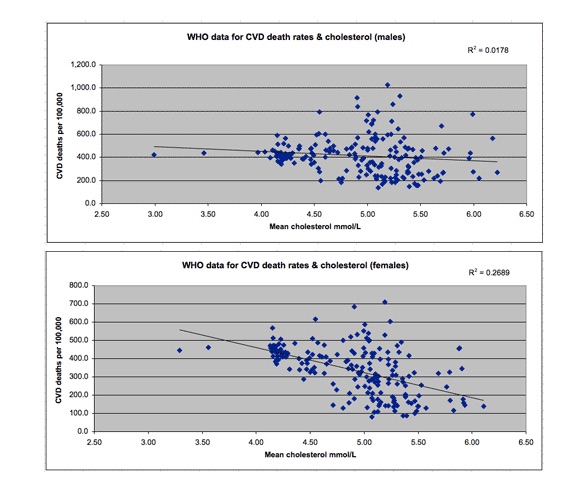 Watch Drs. Berry and Saladino…it’s about an hour in length but well worth it IMO…

My LDL = 600-700, super high and started with reformed diet and exercise. At the same time blood sugar was normalized. What I told the doc is I’m more frightened by high sugar than by high LDL, especially when my HDL:trig ratio is fine. The doc said he’d never seen LDL as high as mine and I haven’t noticed any historical data about super high LDL before LMHR’s came along. I’m finding this supposed rarity impossible to believe. There is nothing new under the sun. Where are the super high LDL people of 50 years ago. None have EVER been detected before recent times? I simply don’t believe it.