If you have extreme advance warning because most of the world is in chaos and you don’t yet have much of a virus problem - New Zealand, for instance - you’re in an incredibly fortunate position.

So how much “extreme advance warning” did NZ have compared to the US?

The virus was not already in NZ passing through the population by the time that the Chinese Communist Party admitted that they had a bit of a problem. The virus was already well established in parts of Europe and the USA before anyone in those areas knew of its existence. This has been proven by analysis of sewerage samples.

That was sheer luck for NZ

So how much “extreme advance warning” did NZ have compared to the US?

Another vote for how lucky NZ was.

I don’t know for sure but from what I remember, NZ and NY State shut down at about the same time but NZ had timing of virus arrival and population density (or lack thereof) going very much in its favor.

When you say “like with like” in this case, you mean the parameters we now know contribute to COVID severity? Here are a few, though I’m sure there are others that we don’t yet understand or recognize:

Were you thinking of one parameter in particular?

I don’t know how reliable this is, but here are Sweden’s deaths to date compared to earlier years: 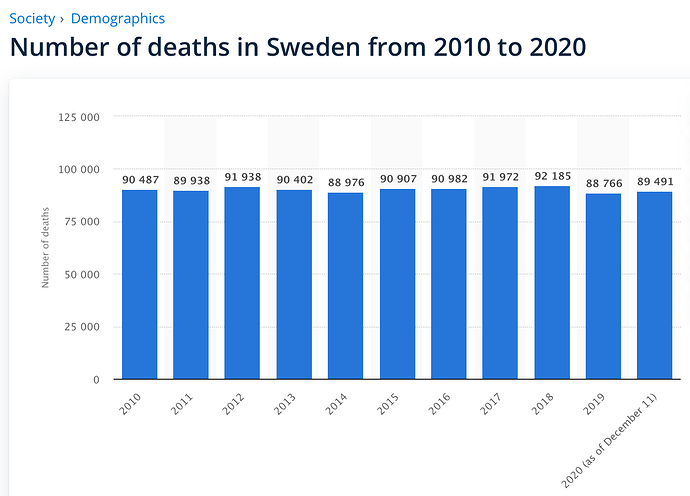 Are those absolute numbers or per capita?

Those who want lockdowns will find a way to justify them and ignore any evidence that contradicts their effectiveness.

California’s governor and other health officials have said over and over the biggest danger for the spread of covid is gatherings in homes. Thanksgiving packed the ICUs and Christmas will kill Grandma.

That could well be true, but what are they shutting down? Outdoor dining for one- a setting where it has been demonstrated that people can get together safely without spreading covid. Something businesses across the state have dumped millions into setting up in an effort to stay afloat because the data show itnis not involved in the spread.

California’s Health and Human Services Secretary Mark Ghaly was asked recently at a press conference if there is any data that show outdoor dining has contributed to the spread of covid and and if not, why were they shutting it down. His answer? No, outdoor dining isn’t dangerous, but we just want people to stay home.

Are those absolute numbers or per capita?

They look like absolute numbers to me (y axis actually says " numbers of deaths"). Otherwise they would be - what - per million inhabitants? That would be incredibly high.

[The other side of this equation is that Sweden is investing in the wellbeing of its young by keeping schools open for almost the whole pandemic. I think it will be years before we fully understand the toll that long-term lockdowns have on mental as well as physical wellbeing. As I’ve said above, I’m not completely opposed to them, but I find it frustrating that the other side of the ledger is rarely mentioned by those who are consistently advocating lockdowns. Or - worse- those effects are attributed to the virus itself.]

When you say “like with like” in this case, you mean the parameters we now know contribute to COVID severity?

When I say ‘like with like’ I mean if you compare Sweden to similar Scandinavian countries. The Swedish have admitted that they could and should have done more to protect their vulnerable citizens and they are trying to do more now.

I think this is reliable. It is based on the official statistical numbers from the Swedish government

I have probably said this before, but we aren’t going to know the true ‘best’ course until we have some distance.
We don’t even know yet when covid started making its way around the world and when it arrived in different countries. They keep revising it back and the last earliest date I heard was September. Deaths prior to March were not counted as covid, so we don’t have even have accurate numbers.

It is like flipping between football games on Sunday afternoon and judging how a team is doing by how many points they have at 3:00, without paying any attention to when the game started.

It’s like the other Scandivian countries in only some of those other parameters so that seems a bit arbitrary.

When I say ‘like with like’ I mean if you compare Sweden to similar Scandinavian countries. The Swedish have admitted that they could and should have done more to protect their vulnerable citizens and they are trying to do more now.

Yes, this is true (and admirable, I think!). Has the gov’t of NY admitted the same thing? I think they did even worse re: nursing homes. I’d love to see that ability to admit and adjust for mistakes from other policy makers.

Has the gov’t of NY admitted the same thing?

Not really. The Australian Federal Government also failed nursing home residents in Victoria but are pointing the finger at the state Premier. I’m not sure that there are any or many that have covered themselves with glory when it comes to care homes.

I’d love to see that ability to admit and adjust for mistakes from other policy makers.

I can agree with you there.

I’m not sure that there are any or many that have covered themselves with glory when it comes to care homes.

Sadly, this is true. To be fair, as opinionated as I am about all of this I don’t think I would like to have been in the position of a policy-maker, especially in the spring. You make an educated guess and just hope that it’s the right course of action and then watch as people 1) die anyway and 2) lose their minds and livelihoods from the restrictions.
Let’s hope for a better 2021.

For anyone still interested, here are the deaths to 12/30/20 for Sweden compared to earlier years. One argument is that last year was very light for influenza in Sweden so they had more people who were very susceptible to dying from COVID in 2020 (reverse seems to be true in Germany: 2019 was a bad flu year, which left fewer folks who would be likely to die from COVID) but in terms of total numbers, it’s hard to know exactly how that might play out.

These numbers could be packaged in many different ways: over 6k more deaths than in 2019 but also only 3k more than the highest recent year (2018).

I think that Sweden pretty much followed the WHO guidelines that were in place for such viruses before spring 2020 and the gov’t seems to have used the “flatten the curve” aim that had been the general consensus in March and April of this year (imposing restrictions when caseloads got too high for hospitals in late 2020, for instance).

The death numbers don’t take into account the lasting effects from those who have recovered, obviously, and nor do they reflect the important but much harder to measure effects on physical and psychological health from various measures that were tried in different areas.