I didn’t measure anything so hang onto your shorts.

Mix unsweetened dried shredded coconut with heavy cream until thick and sweeten to taste with Truvia. Drop by teaspoon onto wax paper. Freeze. 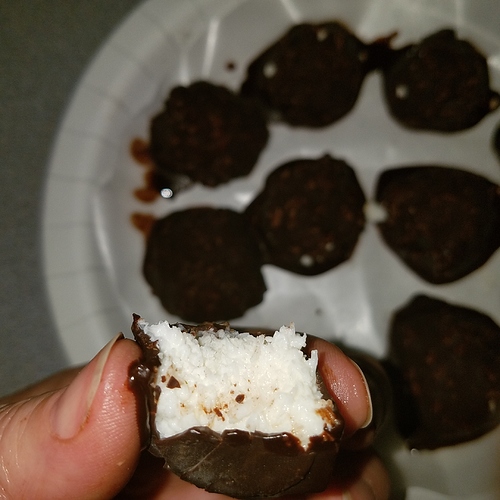 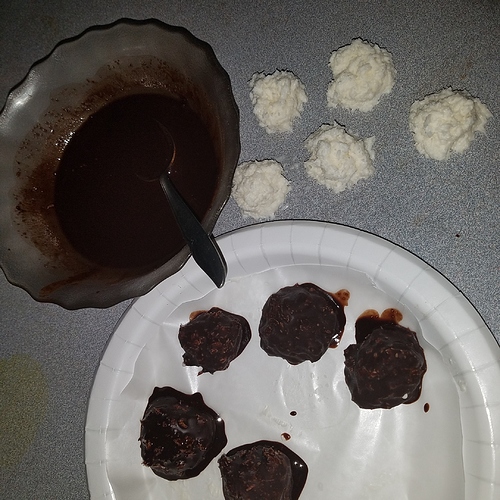 I figured it out. If you use a 1/2 cup coconut(unsweetened you dweeb!), 2 ounces of a 90% cocoa chocolate bar, a few tablespoons cream, and make 12 candies…

Then these are 1 net gram carbohydrate each

Those look just like some treats my mother-in-law makes, only I could eat these.

I wonder… If I rolled the coconut mixture into a bar, maybe with waxed paper, and chilled it, I bet I could get the same shape of the coconut rounds she uses.

I made something similar to a bounty, but it was a lot of work … this sounds much easier 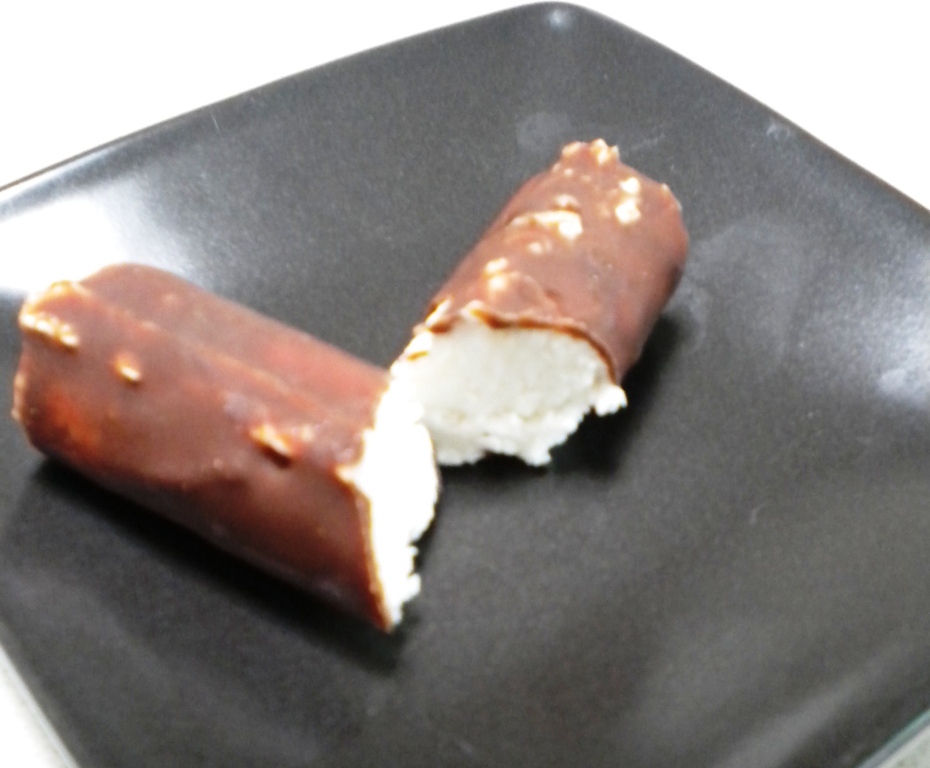 This is my third post for Easter 2015 - this time my Coconut chocolate bar. The Atkins bar When we first started eating Lo-Carb we were in a sudden panic about all the sweet things we wouldn't be able to eat from our previous carby life....

Brace yourselves… Bounty is coming!

I’m working my 5th night in a row…so tomorrow. Tomorrow I am making these. My personal chef (hubs) is sick so no chance of him making this right now.

OK…got around to trying my own version of these.

Started with the same basic ingredients as @Brenda, shredded coconut and HWC, plus a couple packets of Truvia. Decided, since I had some on hand, to also throw in a couple of tablespoons of creamed coconut: 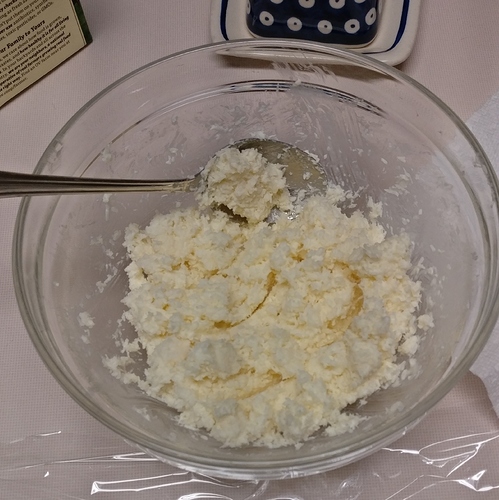 After that, I figured I’d try my idea of making a roll out of it, freezing it and cutting it into rounds. Here’s a pic of the roll, along with the beginnings of the chocolate covering: 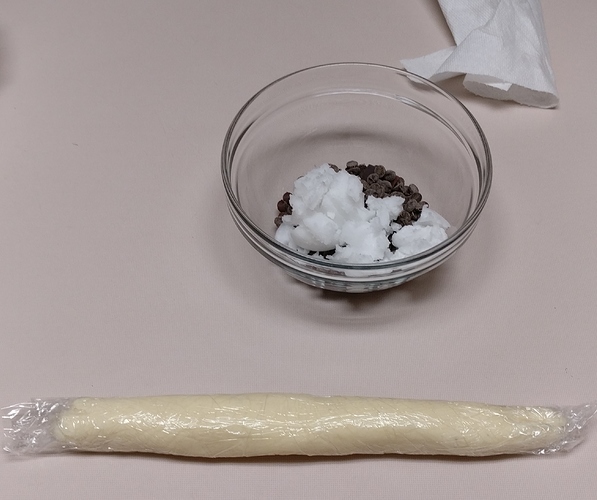 Turns out that the mixture didn’t hold together well enough to slice, so it just crumbled.

Back to the drawing board.

Ended up packing the coconut mixture into an ice cube tray (had just enough for all 14 slots), and put it in the freezer for an hour or so to chill. In the meantime, I completed my chocolate covering, which consisted of a square of 100% cacao Ghirardelli baking chocolate, 1/2 cup of Lily’s stevia-sweetened dark chocolate chips, a couple of heaping spoons of coconut oil, and a few chunks of cacao butter, warmed gently in the microwave until it all melted (no more than 15 seconds at a time, with lots of stirring in between). I also used about 1 Tbsp of powdered Swerve to add a little more sweetness to the chocolate.

After the coconut pieces had time to solidify, I took the ice cube tray out, and put the tray in a baking dish of warm water for a few minutes to make it easier to free up the pieces. Then covered them in chocolate, and voila: 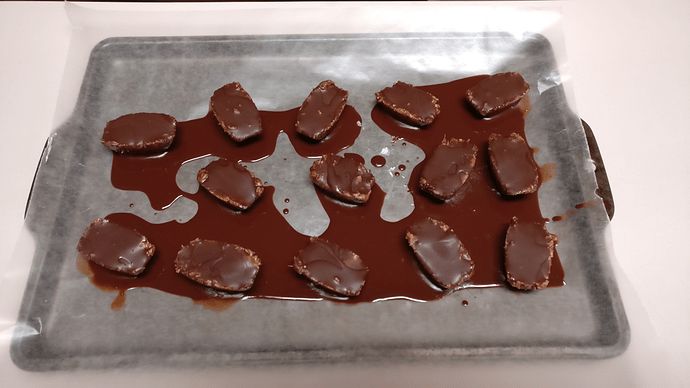 Ready for my close-up: 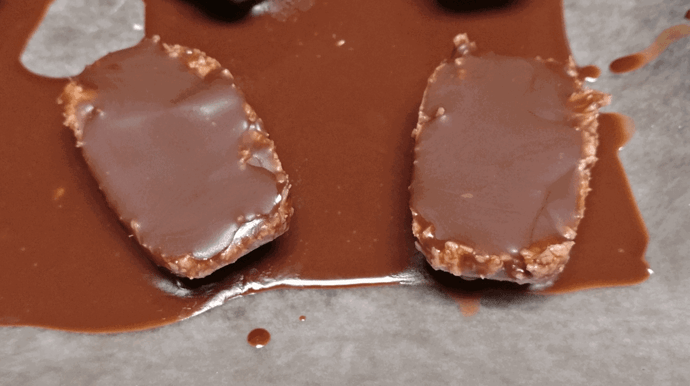 And the taste? Deelish!

Thanks for the inspiration, @Brenda! 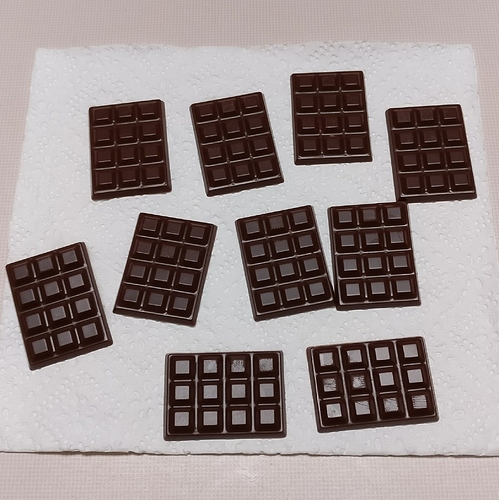 Glad you enjoyed them. I’m looking forward to eating the rest of mine Sunday night.

Started with the same basic ingredients as @Brenda, shredded coconut and HWC, plus a couple packets of Truvia.

What?? @devhammer, the King of Mascarpone didn’t use it instead of HWC?

Oh holy crap what a good idea! I have a nearly full 8 ounce package of mascarpone I need to use up! Guess I’ll be making more candy Sunday night! Thanks Bill. Or is it Jay? @BillJay

What?? @devhammer, the King of Mascarpone didn’t use it instead of HWC?

I am shamed. It didn’t even occur to me. I must be slipping.

Amazing! Made them with toasted coconut… So good. 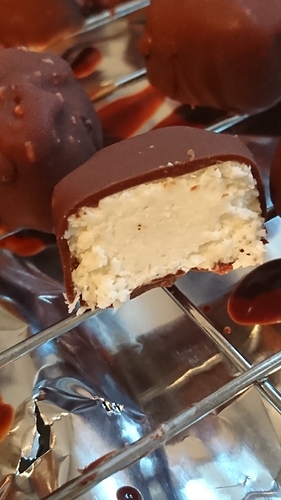 Now that I’ve let them set, the middle part isn’t frozen and hard anymore. More like a mousse, because I whipped the cream and probably used less coconut.

How did you get the coating so thick and even? They look fantastic. Nice job!

I may try toasting the coconut for the next batch. Both of my (not-fully-keto) kids loved them.

And the candy bars I made with the leftover chocolate were a hit, too. I think using powdered Swerve makes a huge difference in the texture…much less grainy than just using Truvia. I need to play with the proportions of chocolate, coconut oil, and cacao butter. Bet I can get a combo that will remain set at room temp.